Latour’s latest ex-cellar tranche of its 2005 grand vin and 2011 second wine has “meandered” along since its release earlier this week, with sales apparently very strong in places and merely reasonable in others. 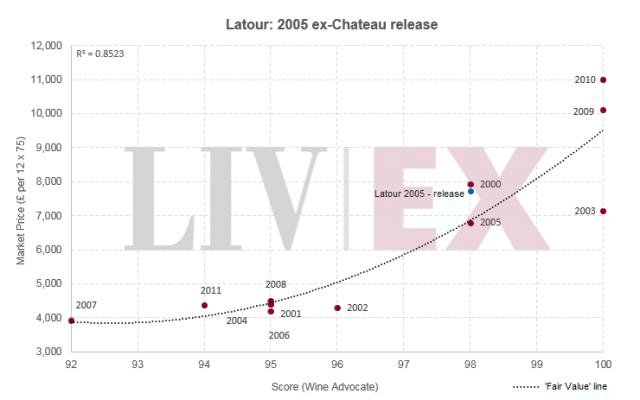 As expected, both wines were released on Wednesday this week. Around 3,000 cases of the 2005 were put on the market at €670 per bottle ex-négociant, leading a case to offered in London for around £7,800.

As Corney & Barrow’s head of fine wine, Will Hargrove, told the drinks business: “The exchange rate obviously gets in the way – ideally it would only be 5% – 7.5% up.”

In terms of reactions from merchants, the picture is mixed. Hargrove said it was “not bad but not exciting,” while Giles Cooper, BI’s head of marketing, was more positive saying it, “actually sold pretty well – a 10% premium seems to be considered about standard for an ex-château release these days so while we thought it was priced a little on the high side, (the standard release was listed on our LiveTrade screen at around £7,100) we had customers in all our global offices who were taken enough with it to buy a few cases.”

Even more success was had by Goedhuis. Like Cooper, buying director David Roberts MW admitted that he too was initially a little concerned by the price. “We were a bit disappointed with the price,” he said. “It was very much at the high end with a very comfortable 10% premium. It made us think it would be difficult to sell.”

However, he added that offering it to clients it was made very clear that despite the premium it was extremely unlikely further stocks of 2005 would be forthcoming from the estate, the 2005 was of course an excellent vintage and Latour itself was “one of the outstanding success.”

As a result, he continued: “We’ve had success with it and sold really nice volumes. We’re very pleased. It hasn’t flown out of the door but we sold our initial allocation and took on additional stock. It will be more of a success than the ’03 last year.”

In relation to the perceived ‘value’ or lack of it that the 2005 represents Roberts said it certainly isn’t “a steal” but that people were buying it for the right reasons – which is to say on the basis of the wine’s quality rather than any investment potential. While he did not think in 18 months time it will have shot up in value nor is it likely to have fallen either.

Read more: Is there a case for buying 2005 Latour?