Provence wine producer Mirabeau has unofficially claimed the title of ‘world’s most watched wine video’ after a video of winemaker Steven Cronk opening a bottle of wine with a shoe hit 50 million views. 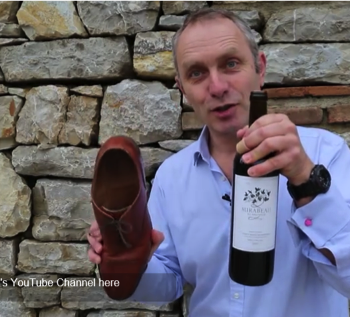 The short film, “How to open a bottle of wine – without a corkscrew”, was posted to You Tube by Cronk in January 2014. It has since received 11 million views on You Tube alone, with a further 39m viewed across social media platforms including Facebook.

The 50-second video shows Stephen demonstrating how to open a bottle of wine using a shoe and a wall.

Cronk produced and posted 221 videos on You Tube before his now famous shoe video hit the viral video jackpot.

“I’m keen to entertain and engage with fans on social media platforms and this video seems to have hit the spot, though not for want of trying – this was the 222nd video we shot and posted online!” said Cronk.

“Doing fun things like this doesn’t detract from the fact that we are making award-winning Provence rosé (in fact probably the most awarded Provence rosé in the UK this year), and our aim is to simultaneously demystify the word of wine and to make wine fun for consumers. Having done our research, 50 million views must make this video from Mirabeau the most watched online wine video in the world.”

Mirabeau en Provence, which produces Provence rosé, was founded by British couple Stephen and Jeany Cronk in 2009 when the couple left their home in south-west London to pursue their dream of making wine in the south of France.

The couple produce two wines; Mirabeau Classic 2015 and Mirabeau Pure 2015 – both of which are a blend of Grenache and Syrah.