Majestic Wine has had to order in extra supply of its new own label range after seeing soaring demand. 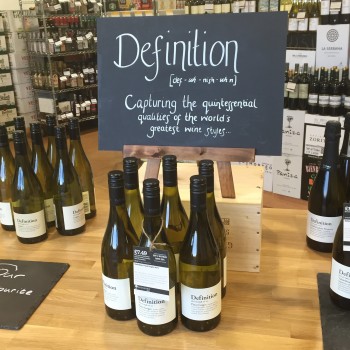 The retailer launched its first own-label range, ‘Definition’, in September, comprising twelve mid-priced wines which were designed to represent the definitive style of a classic wines from specific regions. The first six launched in-store and online in mid-September, with a second tranche hitting shelves on 1 October. However the strong demand has meant it has had to bring forward shipments to keep up with demand.

“Initial feedback and sales of Definition have been excellent,” a spokesman said. “Due to these strong sales, we have placed and brought in more orders of all twelve wines.”

The top selling sku is the New Zealand Sauvignon Blanc, which has sold nearly 13,000 bottles, closely followed by Cotes du Rhone (11,700 bottles) and Pinot Grigio (10,800 bottles) and a Chardonnay from Limoux (8,000). The Rioja, which was the last wine to arrive in store in October, has also proved popular, with the retailer having to order a full container – to arrive at the start of November – to keep up with demand.

Earlier this week the wine retailer announced it was scrapping its 6-bottle minimum and rolling out a new pricing structure. Md Rowan Gormley said the move would remove barriers for potential customer shopping at Majestic and was part of a wider plan to reposition Majestic Wine as the “go-to destination” for well-priced quality wines. It has been widely seen as a key strategic move to enable Majestic to go head to head with the multiple retailers and discounters and boost its market share.

It marked the latest in a series of changes brought in by Gormley, since he took the reins in April following Majestic’s acquisition of Naked Wines for £70m, and follows the introduction of a Click and Collect service across all of its stores in July.