Tesco has announced the closure of its online wine community in order to focus instead on promoting its in-store and online wine offering – much to the dismay of its members. 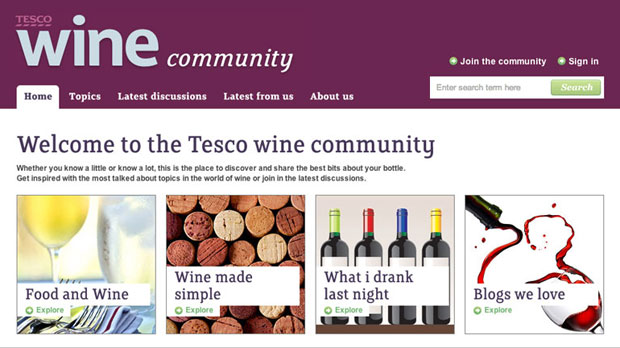 Tesco’s Wine Community launched in December 2011 providing a forum for wine lovers to converse and take advantage of offers. The site also organised tastings – the last of which will take place in September and October.

Big names to have contributed to the club’s content since its launch include wine writer Oz Clarke and TV chef John Torode.

Tesco has confirmed that the website will close on 28 August, as its sets about reducing its online and in-store wine range as part of a wider plan by CEO Dave Lewis to reduce the choice on offer across the supermarkets overall product range.

The supermarket has been losing market share to discount supermarkets such as Lidl and Aldi, whose low-choice, low-cost offering has been winning over customers of the “big 4″ UK supermarkets.

“We have taken the decision to close our Wine Community website”, a spokesperson for Tesco said. “We know the site has proved really informative for some customers, but we will now focus on providing information on our award-winning wine range in store and on our Tesco.com website.”

News of the site’s closure was met with sadness by its members, who took to the site’s forum to express their disappointment.

One wrote: “Really sad to hear TWC is shutting its doors. As a relative newbie to the Community (having only joined in January) I can honestly say there is nowhere else comparable online where wine lovers can share their thoughts and reviews with like-minded folk. I’ve personally enjoyed getting to know everyone on the site (albeit virtually) and my wine knowledge has benefitted enormously through learning from more experienced oenophiles!”

Another said: “I too am sorry to hear of the demise of the TWC, a real shame because in my view it was creating customer value and interest around wine that none of the other supermarkets were doing.”