The best collections and vintages to choose from at Sotheby’s upcoming Mouton Rothschild sale in Hong Kong. 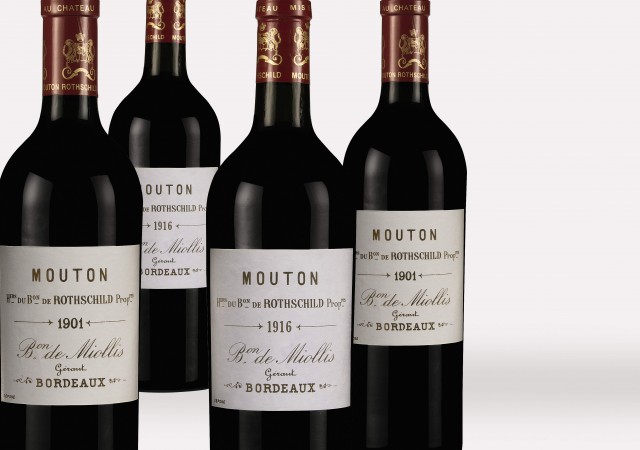 At the end of this month, Sotheby’s is presenting an ex-cellar collection of Mouton Rothschild in Hong Kong to usher in the Year of the Ram.

As well as old vintages, the collection spans many years of great importance to the first growth, such as the famous 1945 vintage, the 1973 when Mouton was elevated to first growth status, 1989 when Baroness Philippine took charge and 2012, the last vintage she chose the label artist for before her death last year at the age of 80.

Mouton is a hot prospect at the moment, it’s one of the few Bordeaux labels that has motored on relatively undisturbed as others crashed to earth all around it and its share of trade by value so far this month on Liv-ex is approaching 13%.

Over the following pages are some of the special collections and particular vintages to watch for at the sale. 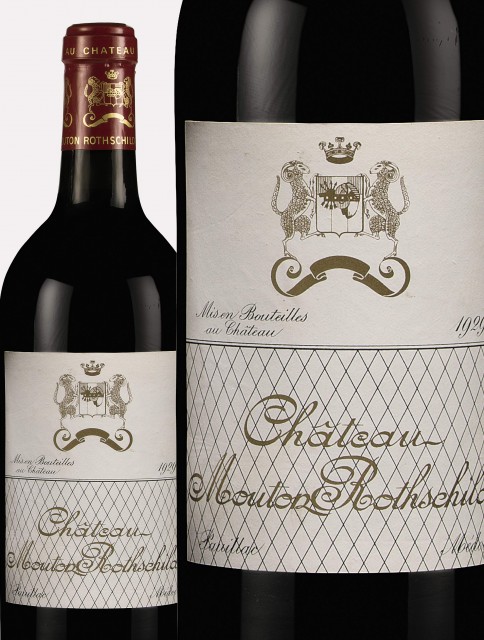 Baron Philippe de Rothschild was only 20 when he arrived at the Château in 1922.

Two years later, with the superb 1924 vintage, later he stamped his presence at Mouton with two new innovations.

To begin with he commissioned the artist Carlu to redesign the label with the coat of arms and script so well known today (modelled here by the 1929 vintage) and, a rarity at the time, he began estate-bottling the wine.

The 1924 stands out for its excellence but also as the moment “modern” Mouton might arguably be said to have arrived. A must for any serious Mouton or indeed fine wine collector. 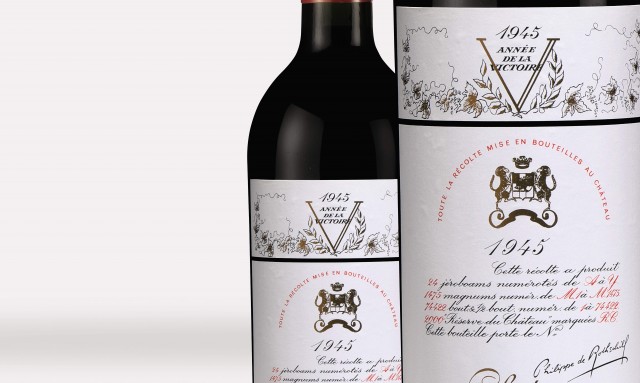 Another lauded vintage and the second occasion when Baron Philippe would set the image of Mouton on the road to being iconic.

Celebrating the end of the Second World War, the baron commissioned Philippe Jullian to design a small addition to the label and, liking it, decided to invite an artist to add a new design every vintage.

The result is a design classic which makes the bottles alone instant collectors’ items. 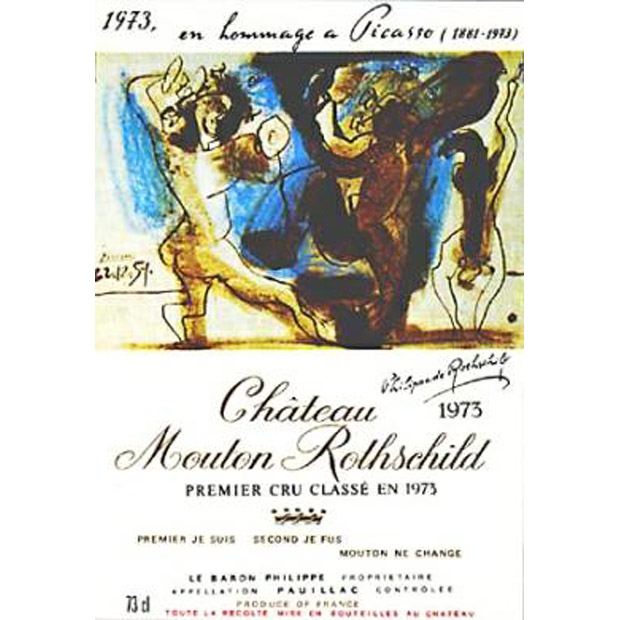 In the classification of 1855 Mouton was left out of the first growth category despite a general consensus it was of a comparable quality to Lafite, Latour & co.

Rumours abounded that as the Rothschilds were British and also Jewish, their property had been downgraded out of spite.

Whatever the reason, Baron Philippe regarded the omission as an insult and campaigned tirelessly to have Mouton elevated, finally achieving his goal in 1973 – the only change to the 1855 classification that has ever taken place.

The label was in homage to Pablo Picasso who died that year and features his “Bacchanale”. The year was not particularly brilliant in terms of quality (the ’70s were generally quite poor) but the tasting note by Serena Sutcliffe MW states that it has turned into a “gentle, sweet, liqueur-like wine”.

If the Mouton labels are collectors’ items then a chance to pick up nearly every single one of them in one go is rare and exciting opportunity.

Otherwise, they’re all there from Picasso, Dali, Warhol, Cocteau and Balthus, to Huston, Miro, Freud and César.

A roll-call of the greatest artists of the 20th and 21st centuries. 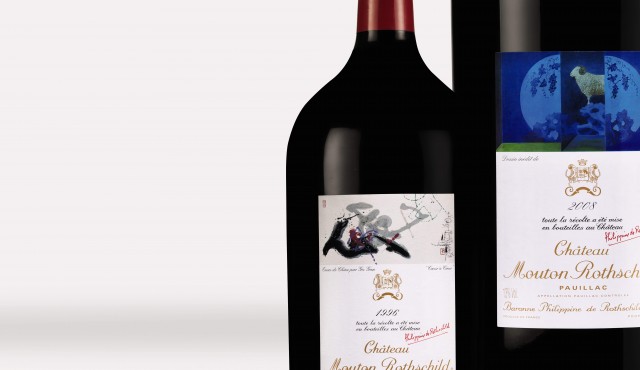 There was great excitement when it was announced that a Chinese was to be the label artist for the 2008 vintage – a “lucky” Chinese number and released at a time when the Asian market was beginning to really take off.

However, Xu Lei, the artist for the ’08, was not the first Chinese artist whose work had graced Mouton’s bottle before.

In 1996 – another excellent vintage – Gu Gan had been commissioned. You can compare their efforts (and the wines) in this lot. 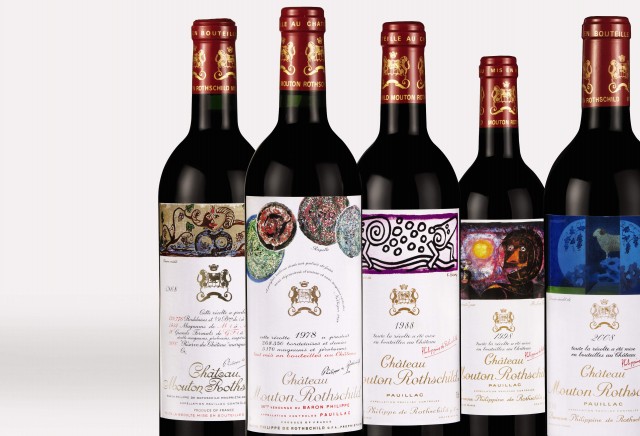 As mentioned before, “8” is a lucky number in China and this lot ties up five exceptional vintages ending in it. 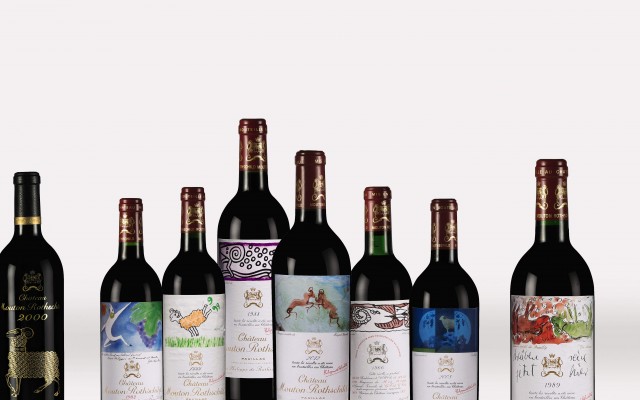 This year is the Year of the Ram in the Chinese zodiac, Baron Philippe’s star sign was Ares the ram (hence the coat of arms, “Mouton” in the château’s name refers to a hill in old French) and the various vintages from actual years of the ram or when a ram has been depicted by the commissioned artist have brought such classics as 1982, 1989, 1999 and 2000.

There are two collections here, one made up of six-bottle cases from the eight previous “Ram” vintages since the 1960s and another, smaller collection comprised of a magnum from each and two bottles for the 1966 where a magnum was unavailable. 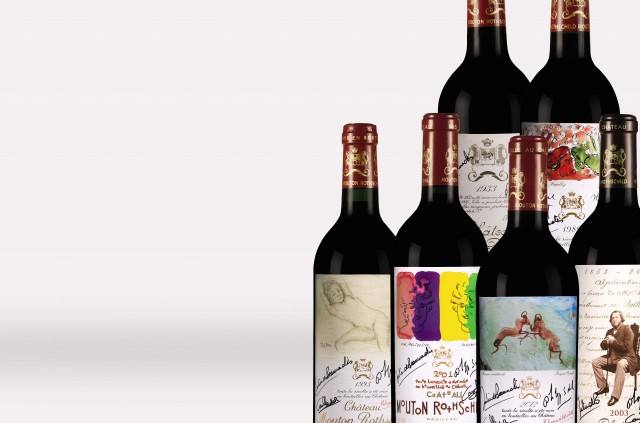 Mouton has been fortunate in that it has had two successive owners as charismatic and driven as each other – Baron Philippe and his daughter Philippine.

From her inheritance of the estate upon her father’s death in 1988 until her own death in 2014, Baroness Philippine was an equally tireless promoter of Mouton and made strides to improve its quality, most recently investing in a new, state-of-the-art vat room which opened in 2012.

These two collections include wines from six important moments in her life: when she was born (1933), becoming president of the company (1989), the first vintage of second wine Le Petit Mouton (1993), her portrait by label artist Robert Wilson (2001), the 150th anniversary of the acquisition of Mouton by the Rothschilds (2003) and the opening of the aforementioned vat room (2012). 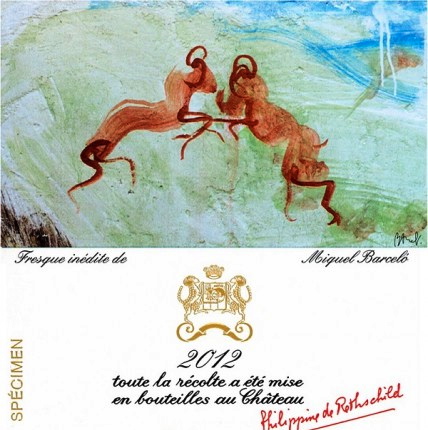 The 2012 vintage was the last in which the late baroness had any say in the artist who would design the label.

She chose Catalan artist Miquel Barceló who has signed the bottles in this consignment, making them doubly unique and doubly valuable.

Considered one of the most influential living Spanish artists, the 57-year-old has had his work exhibited at the Paris Museum of Modern Art and the Louvre. In addition to painting, he produces sculptures, drawings and ceramics. 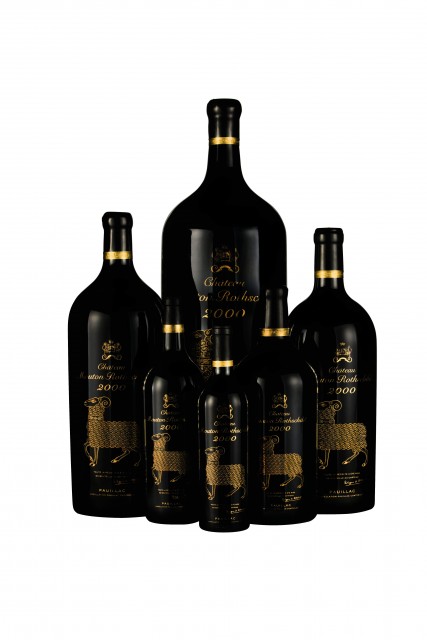 The new millennium gave winemakers and wine lovers a vintage to savour and the distinctive black and gold design Mouton chose to decorate its bottle has made it a firm collector favourite.

Mouton is generally out-performing its fellow firsts at the moment and the 2000 is trading at prices not seen since 2011 while the rest of the Bordeaux market is down to 2009/early 2010 levels.

The 2000 collection is just one opportunity to pick up wines with perfect provenance in large format.

The sale will offer every vintage between 1989 and 2012 with lots ranging from cases, through magnums and imperials to Nebuchadnezzars.