The majority of Brits are unaware that they are charged an average of £10.06 in tax on every bottle of Scotch purchased, with 84% believing it to be unfair. 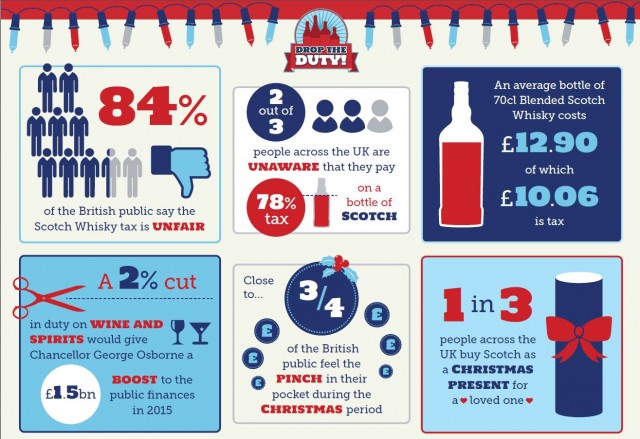 The poll, commissioned by the Scotch Whisky Association, found that the vast majority of the British public disagreed with the “alarmingly high” rate of tax imposed on Scotch whisky.

It follows the launch of the SWA’s Drop the Duty campaign in partnership with the Wine and Spirits Association and Tax Payers’ Alliance, which is urging the government to cut the duty on wine and spirits by 2%.

David Frost, chief executive of the Scotch Whisky Association, said: “These results show that consumers see Scotch as a holiday staple for gifting and entertaining. We have got to find a way to put a bit of money back into people’s pockets not only during the festive season, but throughout the year, which is why we are campaigning to for a 2% cut in alcohol duty in the 2015 Budget. A 78% tax on a bottle of Scotch is simply not fair.”

Scotch Whisky contributes around £5 billion to the UK economy and supports around 40,000 jobs.