Wine bar and shop pops up in London

A Kent merchant is dipping its toe into the London retail scene with the launch of a 12 week pop up wine bar and shop on the South Bank this month. 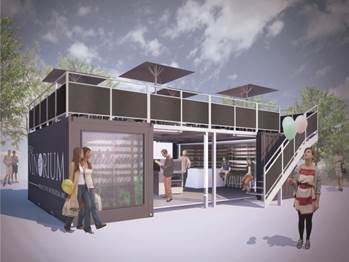 Due to run seven days a week from 15 October until 4 January, The Vinorium will be spread across two storeys, including an upstairs heated terrace area, all created from a pair of 20-foot shipping containers.

With over 2,000 wines available, the venue’s five Enomatic machines will allow it to offer customers the chance to taste a broad range before they buy. This selection will extend to sparkling wines thanks to The Vinorium’s claim to be the first place in the UK to feature the “Flute” preservation system, which is designed to cope with pressurised bottles.

Most of the collection is set to change regularly, with a new range of wines due to be put in place every two weeks. While prices for a sample will start at 70 pence, prices will reach right up to £4,195 for a Melchior of Pauillac second growth Château Pontet Canet 2009.

Each fortnight will have a specialist theme, starting with sparkling wine, which will feature a masterclass vertical tasting of Margaret River producer Suckfizzle. This will be followed by a Bordeaux focus, which will incorporate vintages back to 1945 and a masterclass on Pontet Canet. Another theme scheduled in the line-up is “Mature New World”, shining the spotlight on a large range of wines that are well into their second decade.

The original branch of The Vinorium was set up in 2013 by Bordeaux specialist broker Z&B Vintners’ director Stuart McCloskey to provide a broader focused retail arm for the business.

Explaining the decision to branch out in such an unusual direction, he told the drinks business: “It went down a real storm in Kent, but Kent is Kent so it never really hit the lofty heights for us. We looked at London but bricks and mortar doesn’t really set us apart from other independents.”

As for the appeal of the South Bank, McCloskey predicted: “It’s going to be very interesting. We’ve been up there week on week looking at the potential customer base and it’s hugely varied – you’ve got tourists but also office workers coming through. I think it’s going to attract a lot of people but it’ll be very much a learning curve.”

One of the many unknown quantities is how visitors will choose to use this new feature on the South Bank. “We want people to use us as a wine merchant because that’s what we are,” remarked McCloskey, “but inevitably we’ll be used as a bit of a wine bar too.”

This line between bar and shop will be blurred by the fact that customers of The Vinorium will be able to choose any wine off the shelf to drink in thanks for what McCloskey described as “a super yacht chiller system”, which will cool down wines “within six to seven minutes.”

Looking ahead, McCloskey confirmed an ambition to develop this pop-up initiative by taking his containers on tour to various other locations around London.

“We’re in talks to go to the City for a couple of weeks or we’d like to look at Islington,” he remarked.

While acknowledging the initial “huge hurdle” of finding an architect and engineering team able to get to grips with his self-contained shipping container concept, McCloskey stressed the flexibility of the finished set up.

“We don’t need electricity so we can turn up in a field and our generators will kick in,” he assured. “We can be ready to rock and roll in half a day.”