From the world’s largest bottle of wine to the longest wine list, this world-breaking top ten shows the lengths people will go to have a drink in style. 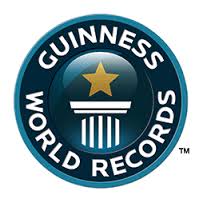 With thanks to Guinness World Records, we’ve flicked through the archive of drinks-related world records to put your normal drinking habits to shame.

So, if you’ve never seen a man open a bottle of beer with a helicopter, or a small team of bartenders serve over 3,000 cocktails in an hour, then take a look at these top drinks records and see how it’s done.

Scroll through for more…

The wine glass was made from acrylic (plexi glass), just as the regular sized wine glass they used as a basis for this attempt.

And we know – it doesn’t look much like a wine glass, does it?

Most cocktails made by a team in one hour

The most cocktails made in one hour by a team is 3,906, achieved by Matthias Knorr, Elena Barnetzki, Anna Knorr and Thomas Weinberger, all hailing from Germany, on the set of TV show Guinness World Records – Wir Holen Den Rekord Nach Deutschland, in Europa Park, Rust, Germany, on 18 July 2012.

The team had the maximum number of eight participants. Each individual bartender did not make the same cocktail more than once.

Most cocktails made by an individual in one hour

The most cocktails made in one hour by a single bartender is 1,905 and was achieved by Sheldon Wiley of the USA at Bounce Sporting Club in New York, USA, on 18 March 2014.

The event was sponsored by Stoli Premium Vodka.

The most beer mats flipped and caught in one minute was 70 and was achieved by David Cowling-Cass (UK) at the World Trade Centre, Barcelona, Spain, on 14 May 2010.

Unfortunately, video or photographic evidence can’t be found for this, so we figured it would be a good idea to spread the word at how best to flip those mats!

The cellars of the Milestii Mici winemaking plant in Moldova contain over 1.5 million bottles of wine, being stored in 34 miles of underground galleries excavated in lime-mining operations. The first bottle was stored in 1968, and new vintages are added each year.

Milestii Mici is also the name of the town in which the cellar is situated.

Budiselic bested his previous record by a whole 9 min 28 sec. Local brewery Zagrebacka Pivovara supplied all 2,000 bottles for the attempt, which was hosted at the Maraschino cafe bar in the city.

The oldest whisky is the Glenavon Special Liqueur Whisky, believed to have been bottled by the the Glenavon Distillery in Ballindalloch, Scotland, between 1851 and 1858.

The bottle, which was owned by an Irish family for generations, sold at a Bonhams auction house in London for £14,850 to a private collector recently. The distillery, in Ballindalloch, ceased operating in the 1850s.

The green bottle is unusually small in size and holds about about 400m.

The world’s largest bottle of wine measured 3.8m (12ft 2in) tall, 1m (3ft 3in) in diameter and was filled with 2,019.79 litres of wine. It was created by OK Watterfäscht 2011 in Switzerland and presented and measured in Watt, Gemeinde Regensdorf, Switzerland, on 9 July 2011.

Most beer bottles opened… by a helicopter

The most beer bottles opened with a helicopter in three minutes is four, and was achieved by Jan Veen of Germany on the set of Wetten Dass??? in Dortmund, Germany on 26 January 2008.

And as you can see in the below video, in attendance to cast his watchful eye was our old friend Gérard Depardieu!

The most varieties of wine commercially available in a single restaurant is 1,746 at the Restaurant Chiggeri in Luxembourg City, Luxembourg when counted on 31 December 2008.

All the wine on the list had been on the menu for more than six months.