Crimes fuelled by alcohol in the UK have fallen by 32% since 2004 and almost halved since 1995 dropping by 47%, research by the Portman Group has revealed.

Alcohol-related road traffic accidents have fallen by 44%, fatal accidents by 53% and roadside breath test failures by 19% since 2000, according to data from the Department of Transport.

All crimes involving alcohol are said to be falling in every region across the country, according to the Crime Survey for England and Wales (ONS).

According to a YouGov poll published today, police and the public seem to agree that local partnerships, better town centre management and a society which is becoming less tolerant to anti-social behaviour are responsible for falling rates of alcohol-related crime.

When asked which organisations were viewed as being the most important in tackling alcohol-related crime in their areas, 57% said the police, 45% bars, pubs and restaurants and 36% local authorities. 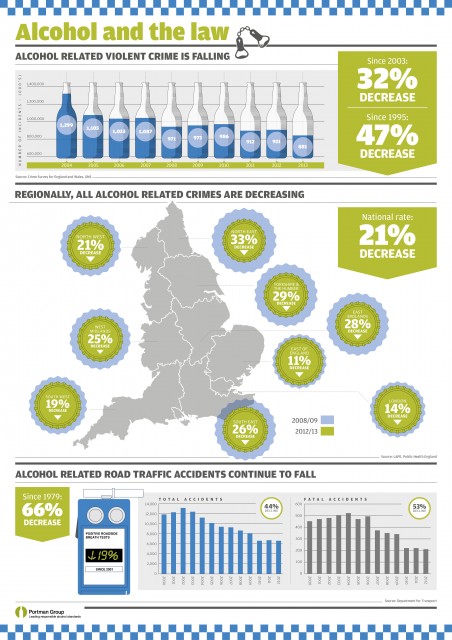 Henry Ashworth, Portman Group Chief Executive, said: “This research confirms what those on the front line in combating alcohol harms have believed for years – that local partnerships are key to tackling crime and anti-social behaviour.

“A steady decline in binge-drinking in the last decade, alongside society becoming less tolerant of anti-social behaviour, better town centre management and partnership working between police, councils and licensed premises is creating safer and more vibrant town centres which is great news for local economies.

“It is in all our interests to continue to invest in partnerships and support these positive cultural shifts.”