A beer infused with black truffles is aiming to make its way into New York’s best restaurants with a per bottle price of over US$120. 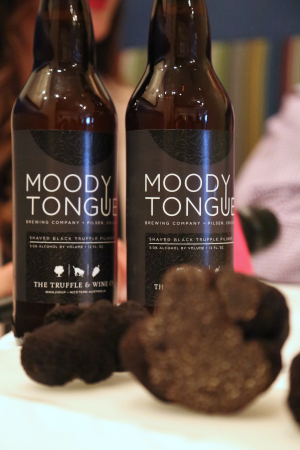 According to the New York Post, Moody Tongue Brewing’s “Shaved Black Truffle Pilsner” was created by the brewery’s founder, Jared Rouben who was originally a chef by training.

The first batch of beer is very small, only 40 barrels or 80 kegs and the truffles infused in the beer were each shaved by hand by Rouben.

“I spent several all-nighters shaving truffles,” he told the Post. “Imagine separating egg yolks from egg whites by the hundreds.”

Based in Chacago, Rouben makes what he calls “culinary beers”, which on the brewery’s website is described as, “a new genre that forges a connection between brewing and cooking.

“These beers share many of the flavour and aromatic characteristics found in wines and ciders, but are balanced with a variety of hop and malts found in traditional beer styles.”

Other beers have seen ingredients such as watermelon, raspberries, coffee, tea, honey, rhubarb and pea.

The beer debuted last month at the Michelin-starred Columbus Circle where it was paired with roasted bitter chocolate, truffle black pudding with brioche cream, walnut floss and green almonds.

However, in which restaurants it will turn up next is, for now, a mystery.