Recent cooler vintages in Napa have encouraged producers to look for restraint in their wines. But how much is the style change welcomed by French winemakers in the region, asks Adam Lechmere.

THE IDEA that there is a style change in Napa is gaining traction. A vanguard of winemakers is searching for expression in elegance – tannins are more pronounced, acidity is coming to the fore, and alcohol is coming down. This is reinforced by two cooler vintages, the 2010 and the 2011, where grapes struggled to reach a classic Napa ripeness, and flavour profiles were necessarily slightly more austere.

This is a development that many great winemakers welcome. Tim Mondavi, who now makes his own Cabernet called Continuum on the cool slopes of Pritchard Hill on the east side of the valley, has been wedded to a more elegant style all his winemaking life. Michael Silacci at Opus One, Cathy Corison in Rutherford, Chris Carpenter of Jackson Family Wines and many others all eschew what Corison calls “the richer style” – the over-extracted and overoaked wines many consumers think epitomise California, and Napa in particular.

And this would seem to be a development that the two dozen French winemakers working in Napa would embrace. The valley has an irresistible fascination for the French. Early pioneers were Christian Moueix and Bernard Portet at Dominus and Clos du Val respectively. Now there are many big names: Philippe Melka, who makes his own high-end wines in Napa and Knights Valley under the Melka label, and also has a dozen consultancies; Philippe Bascaules, formerly of Château Margaux and now Francis Ford Coppola’s right hand man at Inglenook; Genevieve Janssens at Robert Mondavi, and Stéphane Derenoncourt. Then there is Jerome Chery at Saintsbury, Christophe Paubert at Stags’ Leap Winery and Francoise Peschon at Araujo. And then there are enthusiastic young winemakers like former Melka apprentice Julien Fayard, who is breaking ground in the little-known new AVA of Coombsville at the southeastern end of the valley, and a dozen others like him.

They have set up shop in Napa for many reasons but chief amongst them is perhaps the least expected: they relish the challenge. It’s often the received wisdom that winemaking is easy in much of the New World. After all, it rarely rains in Napa between April and October, sunshine is guaranteed, and with it, ripeness. The myriad problems faced by a winemaker in Bordeaux – unpredictable weather, frost at flowering, spring hailstorms, damp, oidium, mildew, millerandage – are rare.

It is these very advantages that many French winemakers – and winemakers of any nationality, if they are dedicated to expressing terroir – regard as challenges.

Napa, Stéphane Derenoncourt says, “is like an opposite philosophy of winemaking. In Bordeaux, you have to fight against the rain to get ripeness. In California you have to fight against the sun to keep freshness”.
But it’s actually a Frenchman, Philippe Melka, who warns there is a danger of simplification if you try to make American wines in the French style. If you “Bordelaise the California fruit… you reduce everything and you remove what California can give. It’s not the right approach. I agree with Parker – we don’t want to create a French California wine”.

The “French sensibility”, he says, is to value structure and texture above fruit. You mustn’t reduce alcohol: if you want to get it down, you either have to pick early and risk unripe wines, or remove it mechanically. Neither option is palatable. “Most vineyards in Napa will produce 14.5% to 15.5% alcohol. You have to embrace the California sun,” he says. At one level you’re going to get fruit-forward wines, with concentration and power, layers of creaminess, tannins that are soft and sweet or chalky. But then you have to look not for concentration but for “purity and precision, structure and texture”.

The attitude to vegetal aromas – the bell pepper or herbaceous note that is common in Cabernet Sauvignon – is something a French winemaker will discuss with enthusiasm.

Philippe Bascaules, who joined Coppola at his legendary Rutherford estate in 2011, is fascinated by the opportunities at Inglenook – the freedom to irrigate, for example – and while he is intent on inding a purely Californian expression of Cabernet Sauvignon, he also hints that that expression may well aim at a structure and flavour profile that Bordeaux itself is in danger of losing.

“Over the last 20 years in Bordeaux there has been a tendency to get rid of vegetal aromas. They decided to pick later and later, and now you can find overripe wines as you do here, with the taste of plums and no freshness.”

So – contrary to Melka’s view – he wants to reduce alcohol, if necessary by irrigation at the end of the growing cycle, or by reducing yield. While he has no intention of picking unripe grapes, there is also the possibility of picking earlier to get “some greenness”.

You would think a simple dividing line could be drawn between the French and the American sensibility in this attitude to vegetal flavours in Cabernet. Even Corison, after all, whose wines are famed for their elegance, is of the opinion that “Cabernet grown in the right place loses its green character”.

Another Frenchman, Julien Fayard, a former Melka protégé and now a consultant based in Napa’s newest AVA, Coombsville in the cooler southeastern end of the valley, agrees with Corison. “Greenness is not what the Napa terroir is about. Napa Cabernet is not difficult to ripen. Our challenge is on the opposite spectrum with overripeness, therefore vegetal or green Cabernet is a sign of overcropping or over watering, or a sign the vineyard is in an area that is way too cold for Cabernet ripening.”

For Fayard, the “French sensibility” is not to do with style so much as constraint, and politics. He loves California, which he sees as “an open book”, but recognises that the rules need to be tightened.
“You can label a wine Cabernet Sauvignon, but you’re allowed to put in 25% of any other variety – Malbec, Petit Verdot, even Chardonnay. For my French education, this is too much. There is beautiful creativity and flexibility here but it is very safe for a winemaker.”

So he makes things as difficult as he can for himself. Coombsville, an area of rolling hills and wooden-railed smallholdings, is as unlike the great appellations to the north – Rutherford, Oakville, St Helena – as Burgundy is unlike Bordeaux.

And it is marginal. “Fifty percent of the land is difficult, fifty percent impossible. It is poor in water, and colder, the soil is three inches deep in places, then hard rock.” This is what Fayard means when he says “there are no constraints, so we have to create them”.

To imply this respect for terroir is a purely European concept would be deeply patronising to the dozens of Napa winemakers who spend their lives crafting wines that are beacons of California excellence – and no one would dream of suggesting it.

But it is also true to say that often an outsider can see things with an objective eye. Philippe Bascaules, steeped in Bordeaux lore and aware that many wines there are becoming international and losing their identity, is launching himself into the challenge of finding how Cabernet expresses itself in terroir that is new to him. It would seem that he’s not entirely in agreement with compatriots like Melka and Fayard – nor native winemakers like Corison – but that is what is so fascinating about winemaking in a new world.

 Continue on for five French winemakers in Napa: 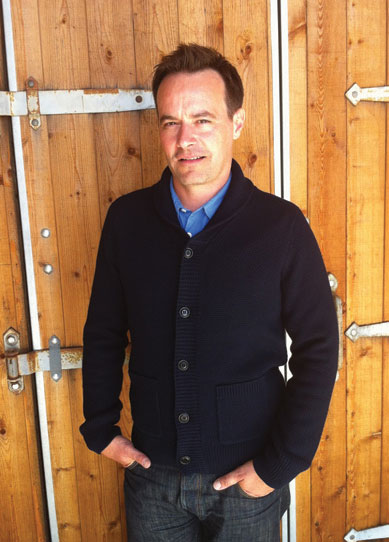 Being a Pinot Noir winemaker, I have exposure to amazing fruit sources from Carneros, but also the Sonoma Coast and Anderson Valley. The valley gathers an amazing amount of talents which is emulating and inspiring. Also, it is very close to San Francisco which has an amazing food and wine scene. Always important to be inspired! 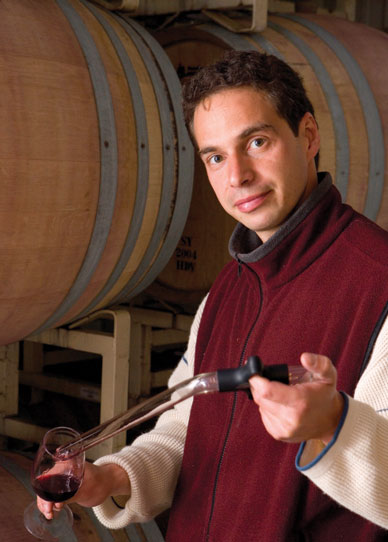 It’s a younger wine region which still has plenty to explore in terms of viticulture and style; it’s a beautiful region, with freedom of thinking and immense energy. But I guess these reasons are just as good for all winemakers, and not only to French people. 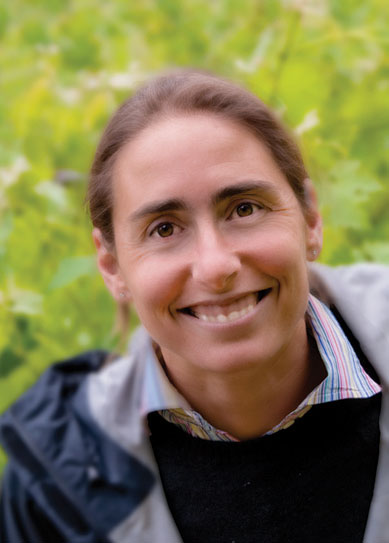 I have worked in Napa since 2003. I have been working alongside Philippe Melka as his assistant since September 2003. I am also the consultant and winemaker for a project called Oakville East (biodynamic vineyards on the east side slopes of Oakville above and below Dalla Valley Winery. I only make Bordeaux blend and Cabernet Franc labels for this project.

Which countries and regions have you made wine in, before coming to Napa?

The diversity of climates and geology we have. Most of the winemakers here want to produce the best wine they can. In the past 10 years there has been a lot of investment in vineyards and wineries in Napa which has resulted in state- of-the-art, gravity flow wineries containing the latest technology and equipment. 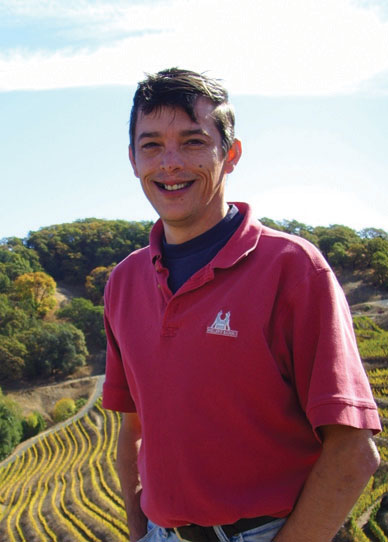 What are the three most compelling reasons for a French person to work in Napa? 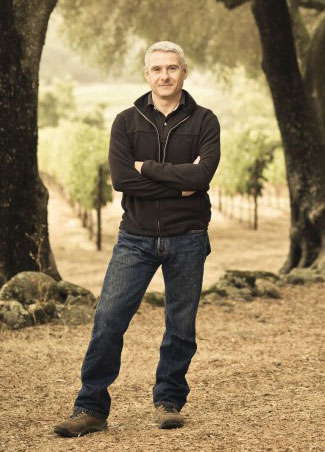 The majority of my training took place in Bordeaux, but my winemaking techniques have been influenced by experiences that span all over the world.

Which countries and regions have you made wine in, before coming to Napa?

Bordeaux, Chile, Spain, New Zealand, and the US.

What are the three most compelling reasons for a French person to work in Napa?

The beauty of the region, the accessibility to nature, the close proximity to San Francisco, and the overall quality of life; the world class wines that are produced in Napa Valley and the opportunity to work for a winery that provides the freedom to craft wines influenced by the French winemaking philosophy, which is focused on expressing terroirs through balance, freshness and elegancy.

I was fortunate to land at Stags’ Leap Winery, which not only provides this freedom, but is also rich and colourful in history, with authentic and magnificent wines.