Looking out at the rows of vines in his Animo Vineyard up on Napa Valley’s Atlas Peak, Michael Mondavi comments that he has not seen two back to back vintages in Napa with both high quality and higher yields, as there has been in 2012 and 2013.

He dates this recollection back to what he calls his start in the industry—in the 1960s. Having grown up on his family’s historic Charles Krug property, that timeline can likely be stretched even earlier.

In the late 1960s and early 70s, Michael Mondavi worked with his father, Robert, making the wines at the newly opened Robert Mondavi Winery, before taking over sales and marketing.

Michael is eager to talk about the present and introduces several intriguing topics on the drive up to Atlas Peak but he leaves the details for his son, Rob Jr, who is already up in the eastern hills.

It seems wonderfully confluent that today Rob Jr. is making wine at Michael Mondavi Family Estate. While you can find both father and son in the cellar and at the tasting room on Dealy Lane in Carneros, the one place you will certainly find both of them at some point in the day is in the vineyard; they wear their love for winegrowing in their expressions and body language as they stand among the vines. Despite the fact that they were still harvesting, both appeared relaxed and completely comfortable in the Animo Vineyard.

Animo’s Cabernet Sauvignon is now cultivated especially for the M for Michael Mondavi wine. The desired style harkens back to older Robert Mondavi Reserve wines from the 60s and 70s. While there is riper fruit and alcohols than those earlier decades’ wines, it is great balance they still seek. 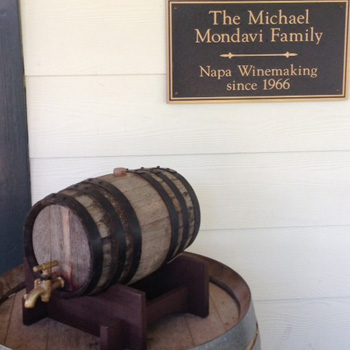 Rob Jr. explains that as he got to know the vineyard site, a number of changes were made. Some of these were small, such as modifying pruning and fertilisation, with larger changes not far behind. Much credit is given to New Zealander, Danny Schuster, the viticulturalist for Ornellaia (the great Italian estate Robert Mondavi acquired in 2002 for a period of time), who helped the Mondavis seek balance in their California vineyards.

Rob and Michael explain that Schuster bases viticultural decisions on the plant’s lifecycle. With many vineyards, by way of example, crop thinning is done when there is around 80% veraison. But Schuster introduced earlier thinning while the grapes are still green. Why, he questions, should the grapevine go through all of the work of ripening fruit only to have it dropped once it changed colour?

More intense changes included switching the vine training from cane to cordon — something done in part to bring out elegance in the M wine. Balance, Rob Jr explained, is now easier to achieve, and the vineyard is also easier to manage.

Head-trained vines are likely in the vineyard’s future – specifically for the family’s Cabernet Franc. The thought is: no matter where the sun hits, there is protection. Greater effort is being put into creating dappled or filtered light among the vines, for more delicate, mature tannins. All of these actions, Michael explains, help lead Michael Mondavi wines towards their desired styles.

No matter the wine, no matter the style, the family is one-cohesive group. Spend time with them at the winery or out in the vineyard and one thing is clear- they enjoy one another. Warm greetings, joking, and a few (very funny) barbs are all in the family.

Following a tour of the Animo Vineyard, the following M by Michael Mondavi wines were tasted:

M by Michael Mondavi 2009 includes a tiny percentage (4%) of Petite Verdot, a first for the wine. There are bright red fruit and integrated oak flavours on a rich, silky palate.

M by Michael Mondavi 2005. The wine’s first release, there are integrated red currant and red plum fruit flavours with olive and spice. The palate is silky smooth.