The Wine Advocate’s Italian reviewer, Monica Larner, announced today (29 August) that she would not be including the producer’s wines in her upcoming Friuli report.

The news broke on Do Bianchi, which also offered a translation of the post (see below, it has subsequently been removed).

Bressan argued that the money used to fund the scheme is being paid for by the Italian taxpayer.

A wave of outrage followed on social media with many calling for a boycott of Bressan’s wines and Bobby Stuckey MS, owner of Frasca in Boulder, Colorado said he would delist the wines.

Bressan remained fairly unrepentant, posting a comment beneath the article on Do Bianchi in which he said, “I speak my mind always and freely as I am a free man. And as such I hate mostly of all hypocrites.”

He said: “But to all the scandalized people about that comment… . I am enraged toward a person that uses public money, MY money!, in a state of financial 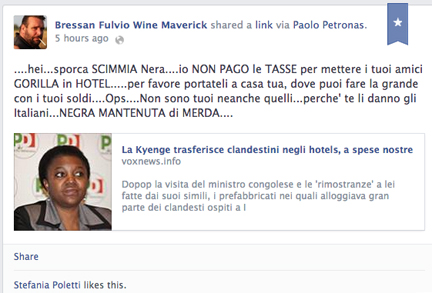 distress of my country, by helping illegal immigrations and criminals while the regular ones and the citizens are suffering. And I will use whatever word I want to express myself.

“If you are offended by my rants… just don’t read them. But if you do, stop using those as a pathetic low way of promoting and marketing yourself.”

He added it was an “honour” to be delisted from Frasca and singled out Stuckey, rather ironically noting: “I would be very surprised if you bought a six pack every three years, would be also awesome if you weren’t charging close to 500% on your cost to put it on the list.”

He finished by saying that a boycott would not harm him very much as he already made very little wine and was wealthy enough to, “be, have and do as I want.”

Rather, he said, any boycott was more likely to harm importers and distributors.

Two days later on 25 August, Bressan posted another comment which he said was composed “with calm mind”.

He began by saying, “First I APOLOGIZE for the words used to that person… but I point out that they were dictated by Rage in seeing PUBLIC MONEY thrown away by this Minister, paid by Italians.”

He then said he would be the first to rescue the minister “in a treacherous sea” but that he would have no qualms about standing by his opinions.

Bressan is a keen advocate of “natural” winemaking, forbidding the use of chemicals in the vineyards, using indigenous yeasts, non-addition of sulphur and eschewing filtration.

He has participated in the Real Wine Fair and is imported by Les Caves de Pyrène.

Meanwhile, the deputy mayor of Diano Marina in Liguria, Cristiano Za Garibaldi, has apologised after insinuating that Kyenge was a prostitute.

He too had posted on Facebook that he was unlikely to meet Kyenge as he did not frequent Rettilineo di Ceriale, a street known for prostitution with a high percentage of the prostitutes being black immigrants.

Born in the Democratic Republic of Congo, in July Kyenge was also compared to an “orangutan” by Roberto Calderoli, a former government minister with La Liga Norte.