With around 20% of Americans on a diet, low-calorie wine brands are booming in the US, and particularly where celebrities are involved.

Kick-starting the trend was Skinnygirl, which, as previously reported by db, was a label created in 2009 initially for ready-made cocktails by chef, author and TV star Bethenny Frankel.

The brand now also includes a range of three wines, which were added to the line-up in March 2012 (following the sale of the label to Fortune Brands/Beam for US$8.1 million in March 2011).

According to the company, the new product has already sold 100,000 cases, half the quantity sold by Skinnygirl wines in its first year, although The Skinny Vine is cheaper, with an RRP of US$11 compared to Skinnygirl’s $15 per bottle.

California’s Beringer brand, part of Treasury Wine Estates, had previously tried to crack this sector in late 2004 with the launch of White Lie – a low-calorie 9.5% abv Chardonnay – but withdrew the product one year later due to a lack of interest.

In fact, the calorie savings in either Skinnygirl or The Skinny Vine aren’t particularly significant: a bottle of white wine at 13.5% abv contains around 560 calories, meaning a 5 ounce/148ml serving will provide you with approximately 112 calories – which is just a 12-17 calorie saving per glass, the equivalent of a small bag of carrot sticks.

Of course the US isn’t the only source and consumer of low-calorie wines, and as previously reported by db, the UK has a thriving low-alcohol – and therefore low-calorie – wine sector.

Driven by a lower duty rate on wines at or below 5.5%, a raft of labels have been launched for UK retailers taking the low-alcohol category to 1 million cases in 2012.

Leader among these is the 5.5% abv Café Collection from South Africa’s First Cape, followed by Banrock Station Light, although big brands such as Blossom Hill and Gallo have both recently unveiled 5.5% wine-based drinks for the UK market, as well as Blue Nun with its Delicate range extension.

Aside from these products, which are technically “wine-based drinks” and not wines, there is a growing number of lower-alcohol (as opposed to low-alcohol) wines coming onto the market, such as Jacob’s Creek Cool Harvest or McWilliams Harmony range endorsed by Weight Watchers.

Germany’s Reh Kendermann has however been producing wines under licence for Weight Watchers since 2002 and currently retail a white and rose with 8.5% abv (and 75 calories per 125 ml glass).

Furthermore, particularly dynamic in this lower-alcohol sector at present is New Zealand, above all the Marlborough wine region.

Already available in New Zealand, Marlborough’s Brancott Estate ‘Flight’ is a lower alcohol range that will be launched to the UK on- and off-trade later this year according to Adrian Atkinson, wine development director at brand owner Pernod Ricard.

This will join longstanding 9.5% abv The Doctor’s Sauvignon Blanc from Marlborough’s Forrest winery and newcomers such as the same region’s “First Pick” – a 9% abv offering from Constellation-owned Kim Crawford – and the 9% abv “Bella” Sauvignon Blanc from Invivo Wines.

Of course, it should be added that there are plenty of traditional, naturally lower-alcohol wines produced worldwide, from Mosel Rieslings to Vinho Verde or English Bacchus. There’s also always the home-made solution with the white wine spritzer.

It should also be noted that while the booming Moscato sector offers drinkers lower alcohol levels, the high sugar levels in the wines don’t provide significantly reduced calorie counts.

Consequently, a Moscato such as Gallo’s Barefoot Moscato has a calorie content of 127 calories per 5 ounce (148ml) serving from an abv of 8.5% and 64 g/l of residual sugar. That’s actually a handful more calories than found in a standard abv dry white wine.

Finally, for those wanting to work out just how many calories there are in a measure of wine, one alcohol unit is measured as 10ml or approximately 8g of pure alcohol, and alcohol has 7 calories per gram. This means one unit has 56 calories.

Over the following pages are db‘s top 10 low-calorie wine brands, ranked according to their scale, awareness and, primarily, calorie content.

Lindeman’s was the first major brand in Australia to launch a lower-alcohol wine range when it unveiled Early Harvest in 2007 with a 25% reduction in alcohol and calorie content.

It is also one of the few brands to produce a lower-alcohol red wine, and Lindeman’s has a Shiraz in its Early Harvest range of wines.

The Shiraz has an 8.5% abv and around 90 calories per serving, as do the other wines in the range, which includes a rosé, white blend, as well as a Semillon/Sauvignon and a pink sparkling Chardonnay.

According to the brand owner, Treasury Wine Estates, the brand is leader of the lower-alcohol category in Australia, which is worth over AU$50 million, and the wines “are skilfully produced using grapes harvested from naturally early-ripening regions of the Murray Valley to produce a wine that is big on taste but lower in alcohol.” 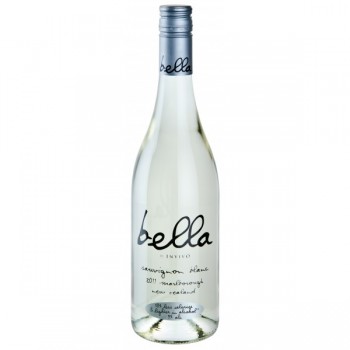 As the UK’s best selling variety, it is perhaps no surprise that Sauvignon Blanc has been the focus of vinous innovation in recent history.

And along with sparkling variants from Marlborough – source of the world’s most pungent Sauvignon – come lower-alcohol wines.

First to the market was Forrest Winery, but others have now followed, creating a whole category of lower-alcohol Marlborough “Savvies”.

For the future, Marlborough Sauvignon brand leader Brancott Estate is bringing the lower alcohol “Flight” to the UK later this year, although the range extension is already available in New Zealand.

The wines contain an average of 90 calories per 148ml/5 ounce serve. 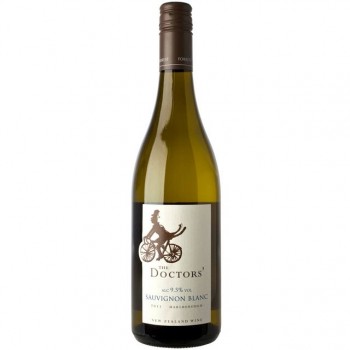 With just 9.5% abv and 9 g/l residual sugar, each serving of this aromatic Sauvignon contains around 100 calories.

According to the producer, careful selection of Sauvignon Blanc clones as well as sites, “plus a couple of little viticultural secrets” have resulted in this lower alcohol wine, championed by Adnams in the UK. 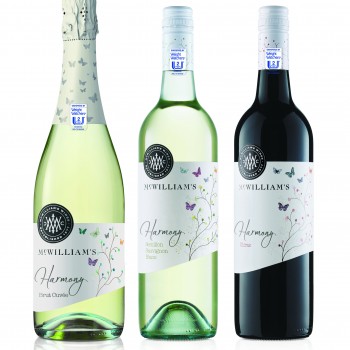 Each bottle features a removable Weight Watchers sticker, which offers details of the programme’s ProPoints value for a single serve, while the back label carries nutritional information, including calorie content.

McWilliams already produces a range for the Australian market called Balance, which has been endorsed by Weight Watchers since 2010. 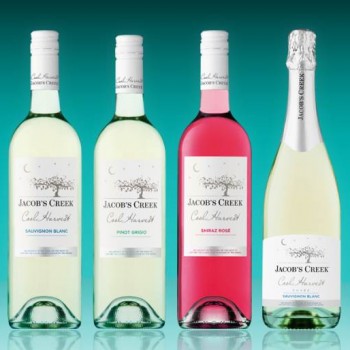 Launched in late 2011 by Jacob’s Creek was a new range called Cool Harvest with a lower abv from early picked grapes which are harvested at night according to the brand owner, Pernod Ricard.

The range comprises as a Vermentino, Sauvignon Blanc and Shiraz rosé with between 9.5% and 10.5% abv, and as a result a lower calorie content compared to the standard offering.

A more recent addition to the range is a sparkling Sauvignon Blanc with 8.4% abv and a slightly higher £10 price tag in the UK. 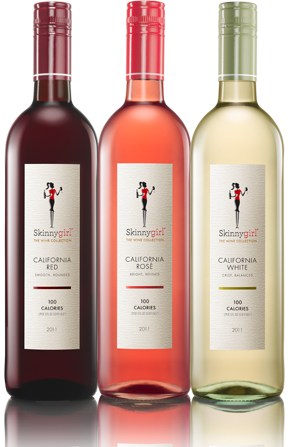 Credited with kick-starting the low-calorie drinks trend is Skinnygirl, which was created in 2009 for ready-made cocktails by chef, author and TV star Bethenny Frankel.

In March 2012 however, the range was extended to include three wines, each of which promise to contain just 100 calories per 5-ounce serving (148ml) and have 12% abv.

The Skinnygirl Wine Collection comprises a California white blend, red blend and a rosé, with each retailing for US$15, slightly more than new competitor The Skinny Vine.

The brand is now owned by Fortune Brands, following Frankel’s sale of Skinnygirl to the group, which owns Jim Beam Bourbon, in March 2011 for US$8.1 million. 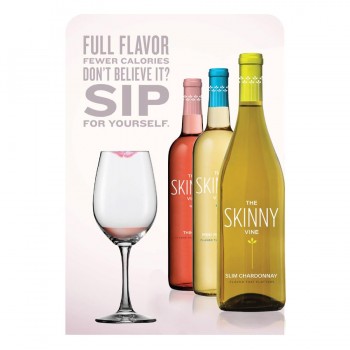 Launched earlier this year by Treasury Wine Estates was The Skinny Vine, a Californian sourced range of wines designed to appeal directly to calorie-conscious wine drinkers in the US.

The product is backed by celebrity nutritionist and author of Skinny Chicks Eat Real Food, Christine Avanti, and according to TWE, the wine brand has already sold 100,000 cases.

Produced under licence for Weight Watchers by Reh Kendermann is Fruity White, an off-dry German wine which contains just 75 calories per 125ml serving.

Comprising a white with 8.5% abv and a rosé with 9%, the wines are “medium-sweet” and employ Weight Watchers’ points scheme, promising drinkers just two points per glass.

As reported by the drinks business at the time, Chris Stirk, director of Weight Watchers Products and Licensing explained, “Reh Kendermann GmbH is exclusively licensed to produce Weight Watchers wine and is the only wine range to include Weight WatchersProPoints® values on the label.”

Continuing, he said: “Contrary to a recent press release, no ‘partnership’ exists between Weight Watchers and either Accolade Wines or Banrock Station Light.”

However, since that time, McWilliams has produced a range which is also endorsed by the UK’s largest dieting brand. 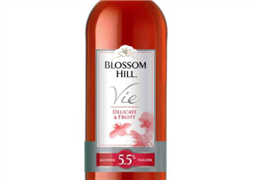 In the urge to hit crucial on-shelf price points in the UK an increasing number of brand owners have launched low-alcohol range extensions because duty rates are lower for wines at or below 5.5% abv.

Such drinks can’t be called “wine”, even though they are retailed in the wine aisle, because they contain less than 8.5% abv – the minimum level for products made from fermented grapes in the EU (though exceptions exist for northerly cool climates).

As a result, the products are referred to as “reduced alcohol wine-based drinks”.

Market leader in the UK is First Cape’s Café Collection which sells around 600,000 cases of a total market for these wines of 1-1.2 million cases.

Newcomers to the category include Blossom Hill with “Vie” and Gallo with “Summer White”.

It should be added that the products tend to contain higher levels of residual sugar than standard dry wine equivalents, with Blossom Hill Vie rosé for example containing 48 g/l, which is almost double the amount in its White Zinfandel rosé which has 26 g/l and 10% abv. 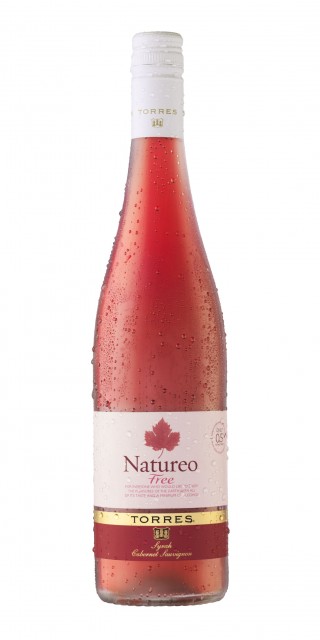 If you really want to lose weight then drink water, but if you crave the taste of wine and are concerned about the calorie intake then Torres has the answer.

Launched back in 2008 was Natureo, a wine from Spanish winemaker Torres that has been stripped of its alcohol content, and therefore the majority of its calories.

With just 0.5% abv the product – it is not strictly a wine – has around 20 calories a glass, which is over half the number in a small apple.

While the white version, made with Moscatel, was introduced over four years ago, Torres has now added a red and rosé Natureo to the line-up.

Speaking to the drinks business about the product, Miguel Torres Maczassek said, “Funnily enough it is more complicated to make a dealcoholized wine than a conventional wine, but after many tests we found the solution in the so-called ‘Spinning Cone Column’, which gave us this great balance of the ‘nose’ and ‘palate’ we had been looking for.”

“So now we have 3 Natureo’s and they are really all a great success in many countries.”

Torres Natureo can be bought in the UK in supermarkets Asda and Waitrose for £5 per bottle.