The Sly Fox Brewing Company in the US has launched its new Helles Golden Lager in a “topless” beer can. 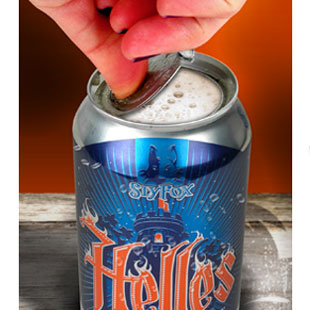 The entire lid of the can is removable, which “enhances the drinking experience while turning it into a drinking vessel and eliminating the need for separate glassware.”

The 360 Lid beverage can technology was developed by Crown Holdings and Sly Fox has become the first brewery in North America to use it.

Sly Fox’s head brewer, Brian O’Reilly, said: “This technology allows the full flavour and aroma of the beer to hit the drinker’s senses and makes the can an even more appealing package for outdoor activities and situations where you want to be able to move around and sip your beer easily.”

O’Reilly added that the new can is ideal for fans of craft beer as it means they can savour the full aroma of the beer.

“Craft brew enthusiasts want to enjoy their beer as it was meant to be experienced whether at home or at an event and the 360 Lid makes the beverage can the perfect vessel to do just that.”

The can is also 100% recyclable and “infinitely recyclable, meaning it can be reused again and again with no degradation in quality.”

The new beer in the new can is scheduled for distribution through early April.