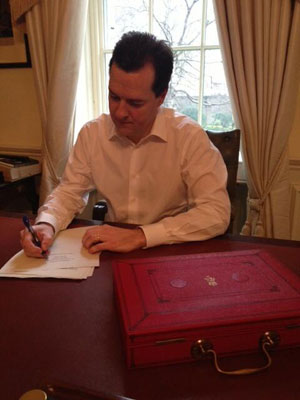 The freeze will equate to a 6p cut in the average price of a pint of beer, but it is thought that the escalator will stay in place on wine and spirits.

The beer community has been particularly vocal in the build-up to the Budget and it looks as though the chancellor will respond to the lobbying.

Chief executive of the British Beer & Pub Association, Brigid Simmonds, said: “It’s clear there is huge public support for British beer and pubs – for a tax freeze, and for an end to the hugely damaging beer tax escalator.

“Times have changed dramatically since the beer duty escalator was introduced. It is time for a rethink.

“Beer tax rises have been so extreme, that a tax freeze wouldn’t even cost the Treasury any revenue. With more buoyant beer sales, and the protection of 5,000 jobs, mostly in pubs, the measure would pay for itself.”

And, in what looks like another attempt to win over voters, reports also claim that the Chancellor will axe September’s planned 3p rise in fuel duty.

The amount of money that workers can earn before paying tax is also expected to rise, to £10,000, but these measures are thought to simply be attempts to soften the blow of another tough Budget.

The Chancellor, who today posted this picture on Twitter in his first ever tweet, had hoped that he would have balanced the government’s books by 2014-15, but that deadline has already been pushed back to at least 2017-18.

The Chancellor will make his Budget statement at 12.30pm, following Prime Minister’s questions and db will bring you analysis of the key announcements.