The price of a bottle of “Two-Buck Chuck”, Charles Shaw’s popular California wine brand, has ended its 11-year run at US$1.99. 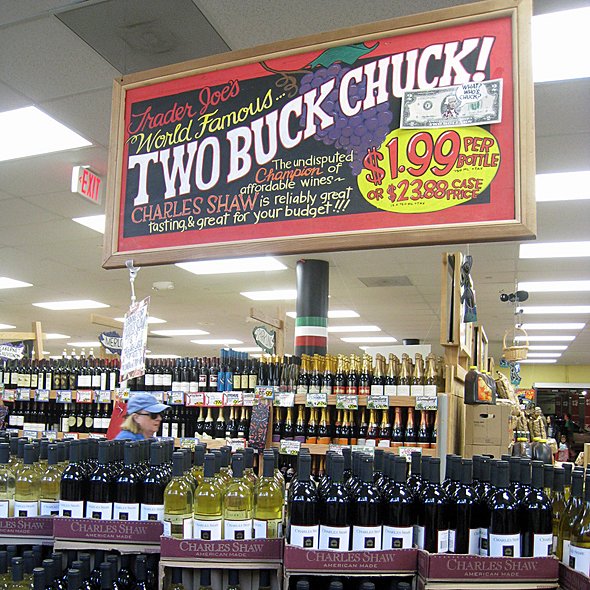 This week, Trader Joe’s grocery stores throughout California has put the price of “Two-Buck Chuck” up to $2.49 a bottle.

The wine has maintained its $1.99 price tag in California since it came onto the market 11 years ago, but ranges from $2.49-$3.79 in other US states due to tax and distribution costs.

“Quite a bit has happened during those years and the move to $2.49 allows us to offer the same quality that has made the wine famous the world over,” Alison Mochizuki, spokeswoman for Trader Joe’s, told the Los Angeles Business Journal.

“In general, our retail prices change only when our costs change,” she added.

Trader Joe’s sells 5 million cases of Charles Shaw wines a year, and has sold more than 600 million bottles of “Two-Buck Chuck” since it first hit the shelves in 2002.

The $2.49 price tag has shoppers searching for new names, with some customers joking that the brand should now be called “Upchuck.”

Owners of the Charles Shaw brand, the Bronco Wine Company, said it was able to keep the price so low because it owns 18,000 hectares of vineyard, which insulated it from large fluctuations in grape prices.

The Charles Shaw range is formed of a number of single varietal wines, including Chardonnay, Merlot, Cabernet, Sauvignon, Shiraz, Sauvignon Blanc, Pinot Grigio, White Zinfandel and Valdigué in the style of Beaujolais Nouveau.

Earlier this month we reported that the average price for a bottle of wine in the UK off-trade has broken through the £5 barrier for the first time to £5.03.