The Elland Brewery’s 1872 Porter has been named Supreme Champion Winter Beer of Britain at the Campaign for Real Ale’s (Camra) National Winter Ales Festival in Manchester. 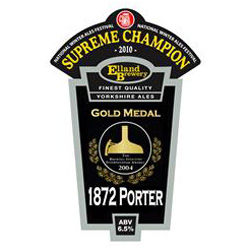 It is the second time that the West Yorkshire-based brewery has won the winter beer award, after being crowned supreme champion in 2010.

The 1872 Porter is a 6.5% ABV and is described in Camra’s Good Beer Guide 2013 as “a creamy, full flavoured porter with rice liquorice flavours and more than a hint of chocolate”.

Elland Brewery owner Martin Ogley said he was shocked to win the award again. “I am gobsmacked, as I never expected this. There are so many great beers at the festival that it is remarkable for the judges to choose us again.

“1872 Porter is our most award winning beer and I will now have to be ready to brew more of it.”

Camra director, Nik Antona, said: “Porters should not be regarded as endangered beers, they are beers for today’s discerning drinkers. And on a cold day, 1872 Porter is a perfect winter warming beer.

“Elland Brewery 1872 Porter is a fine example of a modern day interpretation of one of this country’s classic beer styles. It’s gorgeous, drinkable, likeable and is highly recommended.”

The 1872 Porter and the other Overall finalists, will now enter into the final of the Champion Beer of Britain competition at the Great British Beer Festival, Olympia, London, 13-17 August.