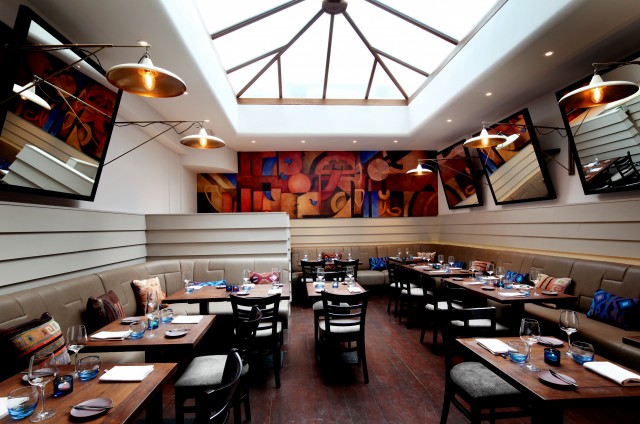 Having been hotly tipped as the next big cuisine by René Redzepi of Noma and Nuno Mendes of Viajante, 2012 will be remembered as the year Peruvian cuisine landed in London with signature Latin style. Touted by many as the new Mexican, the Peruvian food trend in London has been largely spearheaded by dynamic duo Ceviche in Soho and Lima London in Fitzrovia, the former (as the name suggests) specialising in ceviche, and the latter offering a broader spectrum of Peruvian cuisine, including huayro potatoes grown at 4,000 metres.

A collaboration between entrepreneurial Venezuelan brothers, Gabriel and José Luis Gonzalez, and celebrated Peruvian chef Virgilio Martinez, Lima London opened its Inca blue doors last July. Focusing on fine dining, ingredients are predominantly sourced from the British Isles, though Peru’s vast biodiversity is shown off through wild produce from the Andes and the Amazon. On my visit late last year, I was lucky enough to spot Martinez behind the stove in the open kitchen; a rare treat, as he’s based at his high profile Lima flagship, Central, leaving the legwork to affable head chef Robert Ortiz.

Martinez, Ortiz excitedly informs me, had recently returned from a mint foraging mission in the Amazon rainforest like some sort of philanthropic Latin James Bond. Freshness, authenticity and seasonality are at the forefront of Martinez’ agenda at Lima London, the aim being to serve ancient Peruvian ingredients with a contemporary twist.

Split between two floors with a buzzing bar below, the restaurant is housed in a light, bright space centred around a pitched glazed roof designed in homage to the peak of Machu Picchu. White walls are offset by a Cubist-inspired blue, orange and red mural part reflected in the rectangular mirrors hanging from the walls. Dotted across the beige banquettes, blue and orange cushions boasting Inca-like geometric stitching have been cleverly matched to mimic the work that unapologetically dominates the space.

Nestling into a banquette, I bypass the many variants on the Pisco Sour for a spicier number – the Cuenta del Diabolo (devil’s story), a mix of chili-infused Pisco, Cointreau and lime decorated with devil horns fashioned from chilies. The ruby red concoction is soothingly sweet, bringing back nostalgic memories of strawberry Skittles, with a warming chili kick on the finish. First courses are divided into “tiraditos” (cuts of raw fish that navigate the divide between sashimi and carpaccio), ceviches and potato–based “causas”. Peru boasts over 3,000 different types of potato and they go large on spuds at Lima London, showcasing the carb in an array of guises.

Mention must be made of Martinez’ painterly presentation. His dishes are composed of such vivid colour and arresting beauty they make you question whether you’re in a restaurant or a gallery. Were art critic Brian Sewell to dine here, he’d be torn between eating the food and sketching it. The prettiest looking dish is braised octopus with white quinoa and lilac botija olive bubbles, which looks like Damien Hirst has been let loose in the kitchen with a pipette and a bowl of edible flowers.

Sea bream ceviche is served in a mouth-puckering marinade (affectionately dubbed “tiger’s milk”) – fear not, you won’t be supping the vital juices of a female tiger, but rather a vivifying broth of lime, ginger and coriander with a whack of chili that will open your airways faster than you can say Vicks VapoRub.

Duck crudo meanwhile, is formed of juicy slivers of cured duck breast slathered in Algarrobo tree honey, shavings of flesh-coloured foie gras and an unidentifiable yellow sauce that offsets the pink of the duck beautifully, like the colours of a matador’s cape. While I’ve tasted more delicious foie in my time, the overall ensemble is a symphony of colour, flavour and texture, proving umami-rich, creamy and comforting on this bitter winter night.

Seemingly wanting to outdo himself with the main course, Martinez crafts crab, the aforementioned high altitude huayro potato, red amaranth and a purple corn reduction into a rainbow of yellow, pink and white bouncing off the bright orange amaranth powder. He even shapes it into an arc for the full Wizard of Oz effect. The subtle flavours of the sweet crab meat and earthy potato mingle so seamlessly, it’s hard to tell where one ends and the other begins.

While desserts are a chocaholic’s delight, I was lured by the dulce de leche ice cream, curious to see how it would work with the addition of a beetroot emulsion. The daring pairing was a triumph, the toffee sweetness of the ice cream tempered by the earthy undertones of the beetroot, both of which were enhanced by the crunch of the maca root crust beneath, then sweetened again by a swash of dulce de leche recalling the sweet-savoury interplay of Heston Blumenthal’s inspired brown bread ice cream with salted butter caramel at Dinner.

Lima’s wine list is refreshingly curt, if lacking a little in identity, and while the majority of the world’s major wine regions are represented – from Alsace to Stellenbosch via the Colchagua Valley, the food is so dazzling and the cocktails so enticing, wine is forced to take a back seat. My one gripe with the restaurant is that the menu is more baffling than it need be, and will have you reaching for your Spanish dictionary, though the informative staff have an encyclopedic knowledge of obscure Peruvian ingredients, from annatto seeds to white kiwicha. Worth a visit for the visual feast provided by the painterly plates alone, Paddington Bear might not be Peru’s most famous export for much longer…