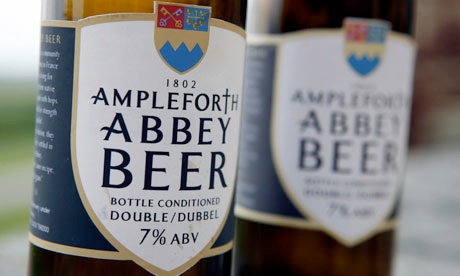 The North Yorkshire monastery produced the beer based on a recipe the monks picked up while in exile in France in the 17th century.

The 7% beer was produced with the help of Dutch brewer, Wim van der Spek from nearby Little Valley Brewery and he and Father Wulstan Peterburs visited several Trappist monasteries in the Low Countries to study production of similar beers there.

Van de Spek then combined these modern practices with details of the recipe for la bière anglaise from the abbey of Dieulouard in Lorraine where the community fled to in 1608.

Sean McFetrich, director of commercial operations at Ampleforth, explained to the drinks business that, “we researched quite significantly into how the beer was made and while we wanted to keep the brewing as local as possible we wanted someone who understood how the type of abbey beer we were trying to make is produced and Wim fitted that.

“We’re trying to develop our own style but it is very much based on Trappist beers. We think we’re the only UK monastery involved in brewing, there are many beers out there with monastic connections – Bishop’s Finger and so on – but we’re the only monastery actively involved, we believe.”

The beer is double fermented – with the second fermentation happening in bottle – and a tasting note from the 17th century described it as having “sparkled like Champagne”, which has of course led to notions that the English monks may have come into contact with their brother Benedictines in France, most notably Dom Pérignon.

The beer became so popular that it was served at the court of the Dukes of Lorraine and was given royal patents by Louis XIV and Louis XV. The monks fled back to England in 1789 with the start of the French Revolution and settled in Yorkshire in 1802 – hence the date on the label.

Hops used include Northern Brewer from Germany and Savinjski Goldings from Slovenia and while the yeast is from an unnamed monastery in Belgium, there are striking similarities with the ales produced by Rochefort in Wallonia.

The production of beer is not the first time the monks have ventured into alcohol production, having revitalised their apple orchards over recent years to produce award winning cider and cider brandy, which are sold in the abbey shop alongside a range of other products including honey, cakes and soaps.

Self-sufficiency and support for the local community is key to the Rule of St Benedict which the monks follow, as is the doctrine of keeping the monks busy in their working as well as spiritual lives.

The money generated through sales of the beer will go towards the upkeep of the abbey.

The beer is due to go on sale in the abbey’s shop in July and it is hoped will find outlets further afield, although the aim is to keep sales local for now.

Fetrich explained: ‘We’re looking at the people who buy our cider at the moment so farm shops, pubs, local restaurants and hotels and it’s also going to be in a local supermarket called Booth’s from July.

“Tesco has also said it’s interested and may take it on from November but again only in its Yorkshire stores. We’re trying to keep it regional to start with and then see how it goes from there.”