Accolade Park: A lot of bottle 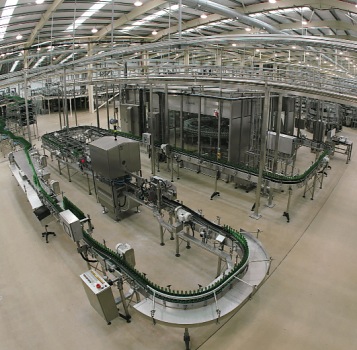 As evidence that there is increasing interest in shipping wine in bulk and bottling as close to the source of demand as possible, Bristol’s Accolade Park bottling plant hit a new high in November with the dispatch of 1.2 million cases in a single week.

The state-of-the-art facility, owned by Accolade Wines (formerly Constellation), was operating Monday to Sunday to meet orders ahead of Christmas and had beaten 2010’s busiest week by 30,000 cases.

It had also broken a record in terms of production at the plant by transferring as much as 20.7m litres of wine into bottles and bag-in-box in one month, during October.

Operators at the site were set for similarly large levels of demand until mid-December as shoppers choose to make their Christmas purchases later than ever before.

Richard Lloyd, general manager at the facility, explained, when db toured the site in late November 2011: “We always run five days a week but we slowly build up towards Christmas from August, moving firstly to six days a week and then a full seven by September, before dropping down to four days in the second week of December.

“However, what we’ve noticed is that Halloween has become bigger for us and Christmas orders are coming a bit later, probably because Halloween is bigger.”

The bottling plant, which was begun in October 2007 by the mouth of the River Severn on the outskirts of Bristol, became operational from January 2009 and produces an average of 130,000 cases each day.

With two high-speed bottling lines, it can fill 400 glass bottles every minute, while there are three further lines used for bag-in-box.

There is also scope for filling more because the plant, which cost US$100 million (£65m) to build and equip, has space for a third high-speed bottling line.

However, Simon Williams, chief supply chain officer for Accolade Wines, said the company is waiting until after Christmas before deciding on whether to install the extra line, which will cost £11m. 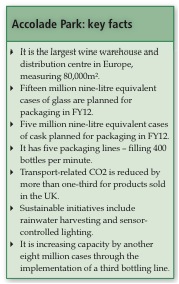 “We have room for expansion and we are envisaging we will need another line but we are holding fire at the moment with the economy as it is.”

Currently, Accolade Park fills the equivalent of 21m nine-litre cases of wine each year, 18m of which are for the company’s own brands, such as Hardy’s and Echo Falls, and the other three million for producers and retailers, including Treasury Wine Estates and Sainsbury’s, which uses the plant for its own-label wines.

Williams explained that without further investment the existing equipment could be used to fill another four million cases of bottled wine and three million case equivalents for bag-in-box, while a third line would allow the facility to process an extra eight million cases of glass bottles.

Notably, while Accolade Park has the capability to bottle under cork and screwcap, it has never been asked to supply wine closed with corks. “We have half a million pounds worth of machinery we have never used,” said Lloyd, referring to the plant’s corking equipment.

The facility also houses 53m bottles of wine in a warehouse and can store as many as 74 containers in its outside yard. With each container holding 24,000 litres, Accolade can, before handling the wine, retain almost 1.8m litres, which, Williams explained, is the equivalent of four days production.

Meanwhile, inside the plant are 84 tanks and each has the capacity to store 55,000 litres. To fill the tanks each container is lifted using a mobile crane and then placed onto a sloping surface to help the bulk wine pass into the tanks under gravity, although pumps are also used.

Lloyd explained that the new operation at Avonmouth was built to replace Accolade Wine’s former and smaller packaging facility at Whitchurch, also in Bristol, which has now been demolished.

With a five-million-case capacity, the old bottling plant was “full” he said, and “because margins were decreasing we needed to increase our capability to bottle in the UK”. According to Lloyd, a shipping container filled with bulk wine will carry 2.5 times more than one filled with bottles, and Accolade is now receiving 8,000 containers at the new operation each year.

As one would expect, the facility is tightly organised and Lloyd pointed out that some of the machinery that was moved from the former plant at Whitchurch is now running 25% more efficiently with 10% fewer people at Accolade Park.

“We have designed the lines to reduce manning because a bottling line can be long and complex,” he explained, adding that the entire complex runs “under the lean manufacturing philosophy” – first introduced by car manufacturer Toyota.

Accolade has also reduced its raw material usage at the plant, not just through the adoption of the 330 gram lightweight bottle but also through the decision to receive flatpacked cardboard for bag-in-box containers. “All others buy their bag-in-box pre-glued meaning they are shipping air,” said Lloyd, “and our boxes have 10% less cardboard in them than anyone else.”

Wastage has also been minimised through small changes such as using bands to secure deliveries of glass in place of plastic shrink-wrap.

Then there are savings in energy usage through capturing latent heat from boilers to warm the water used for sterilising equipment, while rainwater is collected and used for flushing the lavatories.

The latest development at the plant concerns reducing oxygen absorption during bottling. Already, Lloyd said that the wine picks up less than 0.1 parts per million of oxygen from offloading to filling in bottle, “and we know that is leading in the world”.

To assist in analysing the amount of oxygen in the finished wine, Accolade has invested in the £15,000 Nomasense non-invasive oxygen measurement equipment, which reads the total packaged oxygen in a sealed bottle using a laser.

He said that although the bottling process could not be improved in terms of reducing the amount of dissolved oxygen in the wine, Accolade is working on decreasing the quantity of oxygen in the headspace.

“We are looking at the design of the bottle and changing the inside of the neck so there is less free space for oxygen in there. You wouldn’t see from the outside but we are thinking of making the headspace smaller by filling it with a bit more glass – and this is a redistribution of glass in the bottle, so it’s not adding weight.”

Of course the neck could be made shorter, but as Lloyd remarked: “We’ve been told the consumer hates a shorter bottle, and marketeers can be very sensitive, so we won’t be playing with the height.”