Diageo is to invest €153 million in its iconic St James’s Gate brewery in Dublin, though the move seems to confirm the company has abandoned plans for a “super brewery” on the outskirts of the city. 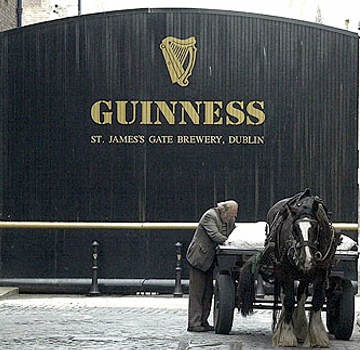 The world’s biggest drinks company had said back in 2008 that it had drawn up a €650 million masterplan to build the new super brewery and sell part of the St James’s Gate site to developers.

However, struggling beer markets and a steep decline in Dublin land value has forced the Guinness brewer to shelve the project.

Diageo will retain a long-term option on land at Leixlip on the outskirts of Dublin, which is owned by descendants of the Guinness family, where it had planned to build the super brewery.

News of the investment in Guiness’s spiritual home will be welcomed by those who expressed their dismay over the brand’s “heritage” being compromised by the potential sell-off of parts of St James’s Gate.

The move will boost capacity by nearly 50% at the historic brewery close to the river Liffey where Arthur Guinness moved his brewing operations in 1759 to brew his eponymous stout beer.

A Diageo statement said: “The plans for implementation at St James’s Gate over the next two years will be an important part of securing the long term competitiveness of Diageo’s beer business and by concentrating all brewing activity on the St James’s Gate site will underpin the company’s commitment to Ireland. “

Though the project will create around 300 construction jobs during the two-year redevelopment, the company said it would press ahead with plans to close down brewing facilities in Kilkenny and Dundalk by the end of next year. The closures are expected to lead to around 100 job losses.

David Gosnell, president, Diageo Global Supply, said: “The decision to consolidate to the St James’s Gate site is fundamental to delivering the competitiveness necessary for the long term sustainability of our brewing in Ireland. This is a significant investment and an expression of confidence by Diageo in our Irish operations.”

Irish minister for jobs, enterprise and innovation Richard Bruton added: “This announcement represents a huge vote of confidence in the Irish economy by a world-leading company, creates very welcome construction jobs, and secures Diageo’s brewing operations in Ireland for decades.

“High-tech manufacturing must be at the centre of our jobs recovery, and today’s news that the next generation of Diageo’s activities will take place at a brewing centre of excellence in Guinness’s historic home in Dublin demonstrates what is possible.

“Every pint of Guinness sold throughout Europe and the US is currently brewed in Dublin.

“Many of its other successful products are also created here, and today’s announcement could pave the way for even greater things for St James’s Gate.”