This year’s Cape Winemakers Guild Auction saw a record amount raised, with buyers participating from all over the world. 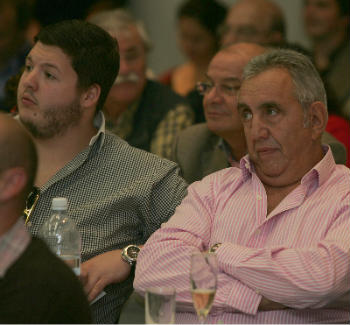 The Nedbank Cape Winemakers Guild Auction, held in Stellenbosch on 27 September, attracted 122 buyers in total and produced an unprecedented turnover of ZAR5,286,700 (£22,676).

Buyers from the UK, Belgium, Namibia, Czech Republic, Hong Kong, Netherlands and Canada, bought 30% of all the wines offered in the auction.

The annual auction raises money to fund the Cape Winemakers Guild protegé programme – a scheme to help the country’s most talented young winemakers.

For the 10th year running Alan Pick (pictured, above right), owner of The Butcher Shop & Grill in Johannesburg, was the biggest spender, buying ZAR1.3 million (£103,182) worth of wine in total.

Speaking about the auction, Louis Strydom, chairman of the Cape Winemakers Guild said: “We got the balance right between the ratio of white and red wines on offer this year and the great diversity of wines ensured keen bidding and interest from the floor right until the end”.

“There was something for everyone with good value on offer as buyers snatched up wines at competitive prices on the one hand, with the more sought-after collector’s items fetching exceptionally good prices on the other”.