Dom Joly pairs up with CIVB

The Conseil Interprofessionnel du Vin de Bordeaux (CIVB) has teamed up with comedian Dom Joly to produce a series of short, fun videos. 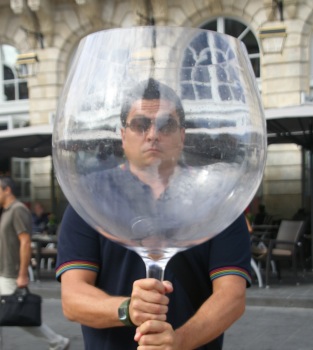 Trigger Happpy TV star Joly is known for his love of wine, food and travel and recently spent time in Bordeaux to learn more about wine production in the region.

As well as sampling wines from some of the region’s thousands of châteaux, Joly also took the opportunity to visit some of the city’s major attractions.

He took a course at the Ecole du Vin, Bordeaux’s wine school, which he described as “the best school I have ever been to”.

He also watched the Marathon du Médoc – a “happy” marathon with runners this year dressed as animals running through the vineyards of the Médoc with the opportunity to refresh themselves with wines en-route.

Joly also took part in the Ouvre la Voix, an annual scream-off contest in the Entre Deux Mers, where contestants cycle along the disused railway, which is now a cycle path, and scream as loud as possible, with the loudest winning.

Joly said: “I spent three fantastic days in Bordeaux in September, I think, probably the most surprising thing for me, was the variety of affordable Bordeaux wines; red, white and rosé available.

“Like most people, I had an image of Bordeaux as being red, expensive and really only for wine connoisseurs, but in reality, there are a multitude of wines available for easy drinking with some amazing wines under £10. I would recommend a weekend in Bordeaux to anyone who loves food and wine.”
A selection of videos charting his visit can now be viewed on YouTube. http://www.youtube.com/watch?v=0YH6tmaKObQ