Goose Island has celebrated the hop harvest season with Chinese consumers at the Chicago beer brand’s brewhouse in Shanghai. 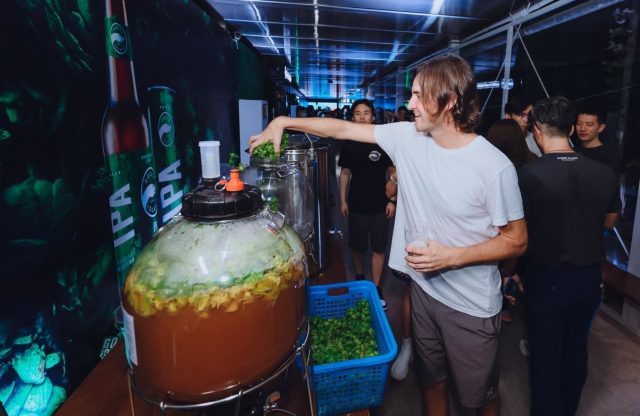 The Goose Island Brewhouse in Shanghai comprises 2-storey, boasting a hop farm and a bar with 29 taps. Earlier, the brewer threw a party that offered a range of interactive experiences showcasing the brewing process, while celebrating a successful fresh hop harvest with Chinese consumers.

Hailed as a pioneering craft beer brand in China, Goose Island has highlighted how it values the importance of raw ingredients. Last year, the brewery has established a hop farm in Jinshan, Shanghai, for growing fresh hops to be used in its beers.

The project began in May 2021, where Budweiser China – the mother company of Goose Island and part of ABInBev – jointly developed indoor vertical hop planting technology with a local agricultural technology company, together they cultivated the classic Cascade hops for the making of Goose Island IPA. Through continuous exploration and practice, the indoor-cultivated hop yield has gradually increased, reaching a production capacity of 3800kg per hectare; whereas when compared to traditional hop cultivation, the output per hectare was only 1600-2000kg.

This summer, the yield of indoor-cultivated hop-planting reached a new high, surpassing the traditional way of planting. Compared with the results of the first phase of indoor hop planting, the yield has since fourfold. Moreover, in the hydroponic setting, Cascade hops’ favoured growing conditions can be reproduced in Shanghai, which helps achieve a good harvest.

In order to better continue the exploration and cultivation of hops, Goose Island has also introduced more high-quality hop varieties into the project and used the harvested fresh hops to brew a series of craft beers in Goose Island for Chinese consumers.

This year, in addition to the success of locally-cultivated Cascade hops, the indoor hop farm has also simulated the growing conditions of hops in Europe, and has also begun to grow Saaz hops.

According to the brand, this indoor vertical hop planting project is an important attempt by the company to practise climate action and smart agriculture. According to agency statistics, compared with traditional planting, the land use of indoor-planting is 90% less, and the use of water, fertiliser, and energy consumption can be reduced by more than 80%. Moreover, as the farming conditions are much controlled, it also safeguards food safety.

The group has revealed it envisions developing the local fresh hop farm further and, in the future, plans to add more hops varieties to its remit to assist in brewing a broader range of beer styles for the market.