Could whisky replace petrol in our cars?

With talk of dwindling oil supplies ramping up, whisky makers could have a role to play in helping to solve the fuel shortage, the drinks business learns.

With a research centre at Edinburgh’s Napier University, Celtic Renewables describes itself as “the first company to produce biofuel from the by-products of the Scotch whisky industry”.

The Scottish government agreed to fund founder Martin Tangney’s explorations into the ABE fermentation of whisky production residues in 2008, and its faith in the project turned out to be well-founded, as the notion of converting Scotch byproducts into usable fuel was proven to have legs in 2010.

Now, with fuel shortages looming as a result of two of the world’s largest oil providers – Russia and Ukraine – being embroiled in a brutal conflict, talk is once again turning to alternative fuel options, and people are beginning to pay more attention to the likes of Celtic Renewables, which has been chipping away at a solution for years.

So exactly how does it all work? “We have adapted a century-old fermentation process (called the ABE fermentation) so that we can use bacteria to convert biological wastes and residues – such as residues left over from whisky production – into low-carbon chemicals that we use in our daily lives,” Tangney told the drinks business.

“Currently these chemicals, specifically acetone and butanol, can only be made from petrochemicals. However, our process makes the same biochemicals that can be used in everything from food production to pharmaceuticals. Butanol can also be used as a fuel.”

The butanol produced through Celtic’s process has been legally approved as a biofuel and can, says Tangney, be used “here and now as a direct replacement for petrol in any unmodified car”.

It is in continuous production at sites including Celtic’s plant in Grangemouth, just north of Edinburgh, and while the fermentation takes “several days to get to large scale production”, the company runs a number of fermentations staggered one after the other to maximise output. 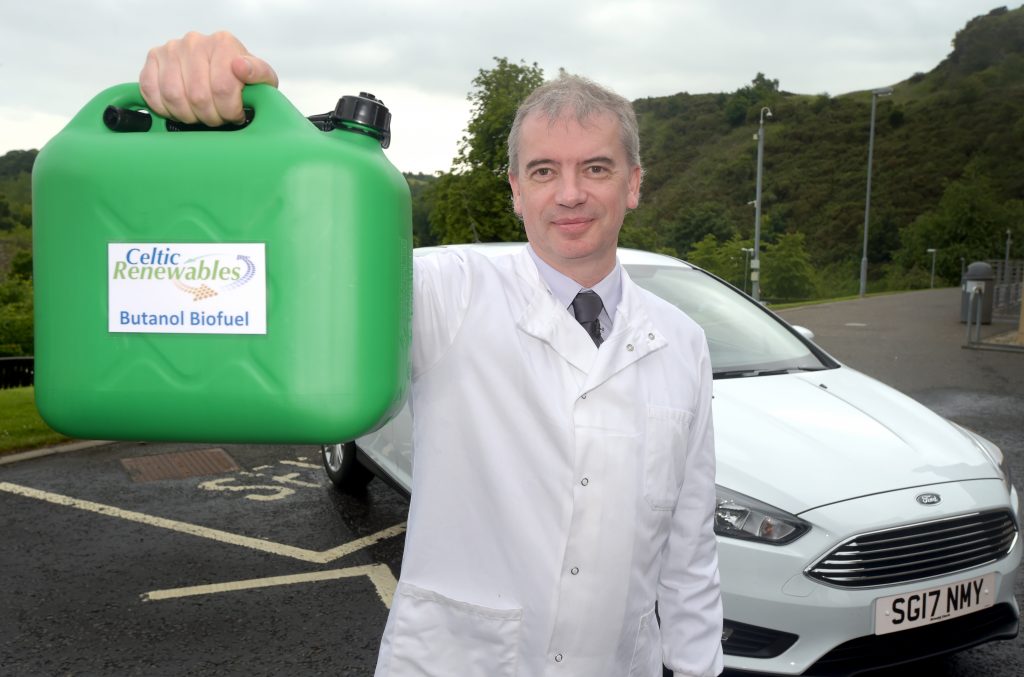 Given that Celtic has already managed to successfully power an ordinary hire car on butanol produced from the residues of a local distillery, it is not beyond the realm of imagination that in time, its product could become available for any one of us to use as an alternative for petrol in our cars. Though what the product’s route to mainstream market might look like is unknown, as is how long it would take to make it widely accessible to everyday drivers.

As for clueing-up distilleries on the potential their waste carries as a potential fuel alternative, Tangney seems keen to steer clear of an educator role.

“Celtic Renewables acts as a completely separate industry from whisky,” he told db. “Our role is to take the whisky production residues and convert them at our plant into sustainable products. Although we are using whisky residues at the moment, we also have the patented capability to use residues from other food and drinks industries. Our objective is to replace petrochemicals with sustainable alternatives using all sorts of waste biological material in a circular model”.

However, one distillery – Ardnamurchan –is already a major investor in Celtic, with Donald Houston of Ardnamurchan Estates stumping up substantial funds to propel the research being carried out.

“The substantial equity investment that enabled us to spinout Celtic Renewables came entirely from Donald Houston,” Tangney has said. “Since then, we have gone on to raise over £43million in multiple rounds and Donald has contributed consistently along the way.”

Houston explained: “Since its launch, sustainability has been a major component of Ardnamurchan Distillery’s strategy. This innovative technology developed by Celtic Renewables fits perfectly with the distillery’s objective.”

Celtic is by no means the only company to have made strides in biofuel-powered vehicles. Glenfiddich announced last year that it intended to use biogas made from its whisky distillation waste to power its delivery trucks.

Glenfiddich’s green biogas currently fuels its trucks as they journey from the whisky’s production site in Dufftown to its bottling and packing sites in central and western Scotland. Each renewably-run vehicle displaces more than 250 tonnes of Carbon Dioxide. A biogas fuelling station is supplied by the distillery’s on-site renewable energy facility.

The fuel itself is created by loading waste matter from the distillery into an anaerobic digester, and capturing the biogas given off as it breaks down. This is subsequently cleaned and used as green, low-carbon fuel for Glenfiddich’s gas delivery trucks. Left-over solids are then used to fertilise barley fields belonging to the distiller’s growing partners.

“The Glenfiddich process is very different to what we do,” said Tangney. “It involves making gas and using specially adapted gas-powered vehicles, and is currently something that is bespoke to that distillery. But it does, however, demonstrate the tremendous desire to do things differently”.

Last year, French oil brand TotalEnergies also introduced a 100% renewable motor car fuel made from wine residues, to be used at the FIA World Endurance Championship (WEC), including the 24 Hours of Le Mans 2022, and at the European Le Mans Series (ELMS).

And if you were in any doubt that it’s possible to run a car long-term on anything but petrol or diesel, it’s worth noting that Prince Charles is said to run his Aston Martin on “surplus English white wine and whey from the cheese process”.