Big producers like Catena, Grupo Peñaflor and Familia Zuccardi are among the biggest names in Argentine wine, having helped to shape the industry and perceptions around the world. Now, the country’s smaller producers too are working to be seen, creating wines of individuality and character.

In 2020 Argentina exported around 395 million litres of wine, the highest volume in the past 12 years, according to the National Institute of Viticulture (INV).

That represented a 26.7% rise compared to 2019, with Argentina one of just four countries to post volume growth, followed by Italy, NZ and Portugal, making it the world’s 10th biggest wine exporter and the fifth biggest wine producing country in the world.

Big wineries drive the majority of exports, but it is smaller producers, making around 100,000 bottles each a year, often less, where Argentina’s creative muscle can really be seen.

While the 2000s in Argentina were defined by big wineries and the growing influence of international winemakers and consultants such as Michel Rolland and Paul Hobbs, the 2010’s saw Argentina’s small producer movement take off. 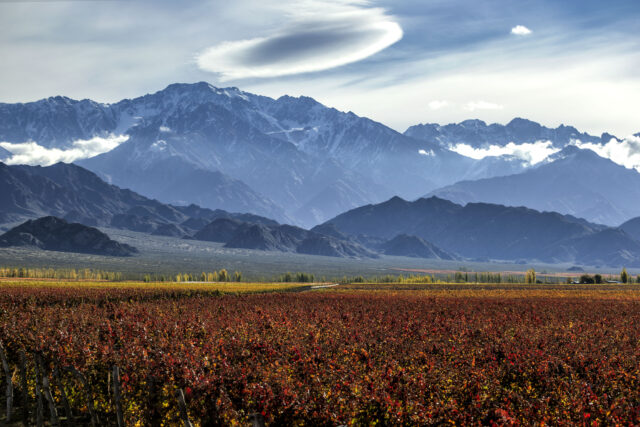 “What’s happening now is that big wineries like Catena and Zuccardi are making small batches and behaving like a small winery, but they are coming up with really interesting stuff,” says Hans Vinding-Diers, owner of Bodega Noemia in Patagonia.

“At the same time a lot of winemakers and agronomists are coming up with their own properties, and they are making a lot of noise because what small producers are doing is reversing that image of the oceans of Malbec and showing that Argentina has diverse climates and regions and can compete with some of the finest wines in the world.”

Of the 900 wineries in Argentina around two thirds are classed as small, run by just a handful of staff, with winemakers working to diversify Malbec by seeking out new terroirs, experimenting with new (and old) grape varieties and pushing innovation in the winery.

Estela Perinetti worked for Catena for two decades before setting up her own boutique label, Las Estelas, making wines from grapes grown at her family’s vineyard of El Peral in the Uco Valley. Oenologist María Jimena López meanwhile worked for Bodega Norton before setting up her own label, Graffito, making wines grown from Malbec and Cabernet Franc in Perdriel, Mendoza.

To survive as a small producer their wines first have to be good, and with a strong sense of identity, making them some of the most inherently interesting too.

Mariana Onofri is a sommelier and winemaker who started her own wine brand, Onofri Wines, in 2014, producing wines under the Alma Gemela and Zenith Nadir labels. Together with her husband, Adan Giangiulio, she produces grapes from an old vineyard in Desierto de Lavalle, northern Mendoza, and another in Los Chacayes, Uco Valley.

“Small producers are the ones that can break the rules of what the market thinks it needs,” says Onofri. “We make what we want, and that’s the beauty, because there are consumers looking for wines that are different and have personality and are expressing something different. Small producers have been able to show that we have the potential to make great wines with individual character.”

Onofri practices sustainable farming and minimal intervention, producing wines through micro vinification and minimal oak, with an emphasis on rescuing old vines, historical regions and grape varieties. Varieties include Teróldego, Carignan and Monastrell, as well as Riesling, Fiano and Grenache, Bonarda and Pedro Giménez. The latter is the second most planted white grape in Argentina (after Cereza), according to the INV, but often ends up in bulk wine production. Onofri produces a 100% Pedro Giménez under the Alma Gemela label.

“When we started making Pedro Giménez everyone thought we were crazy, because it’s mostly considered a class B grape here,” she says. “But it’s very versatile and is a fantastic base for blending. Wineries use it a lot, but it was very sad to see the low price paid for the grape. That’s why we started treating it like other whites. Now there are more than 20 100% Pedro Giménez wines in Mendoza and I really hope it is here to stay. I don’t like the idea of just creating a trend. We have to evolve and we have to take advantage of what we have. We don’t all have Chardonnay – we have Pedro Giménez. We started with very little (600 bottles), but when you are small you can take the risk and go for it. Now we make 6,000.”

Carignan and Grenache are two further highlights for Onofri, with a 100% Carignan produced at its Lavalle vineyard now being exported to London. The region has historically been tied to bulk and inexpensive wines, a reputation Onofri is hoping to shift.

“We are one of the few wineries making Carignan in the north of Mendoza,” she adds. “We are raising the flag, being respectful with what the vineyards can give and being creative, showing that you can do more than they tell you.”

Elsewhere Germán Massera, of the Escala Humana winery in Gualtallary, Uco Valley, which he founded with his wife in 2015, produces wines under the Livverá label, made from rare varieties including a 100% Bequignol (a red variety from Bordeaux) and 100% Malvasia, alongside Sangiovese, some Malbec, Bonarda and Cabernet Sauvignon.

A handful of producers are also forging a new path for biologically-aged wines in Argentina. David Bonomi released a 100% Chardonnay Volare de Flor in 2014 under his Per Se label – the first commercially available biologically-aged Argentine wine. Juan Pablo Michelini runs his own micro winery Altar Uco, with the Altar Uco Edad Antigua Vino en Flor a biologically aged wine inspired by the French region of Jura.

Eduardo Soler’s (Ver Sacrum) Geisha de Jade meanwhile is a 50/50 blend of Marsanne and Roussanne aged under flor for 12 months. While Amansado Wines, founded in 2012 by the brothers Adolfo y Gustavo Brennan, is producing wines aged under flor with the help of consultant oenologist Juan Pablo Michelini. Winemakers are also experimenting with orange wines, including Maricruz Antolin, winemaker at Bodega Krontiras, a biodynamic winery in Luján de Cuyo, Mendoza, who since 2019 has been working to produce an orange wine made from Chardonnay.

Others have ventured into lesser-known or extreme regions to distinguish their wines. Tacuil is among the highest vineyards in Argentina, some 2499m above sea level in the Calchaqui Valley in Salta, northern Argentina. Valle Arriba, owned by Raúl Davalos (of Bodega Tacuil) and Paula Marra, has vines planted at between 2000 and 3000m across Molinos, Cachi and San Carlos in Salta – micro valleys known locally as Valle Arriba. Using Tannat and Malbec, it produces just three limited edition labels of no more than 600 bottles each.

Viñas del Perchel was founded in 2005, in Jujuy’s Quebrada de Humahuaca wine region. It was a pioneer in the region, planting vines at over 2,625m above sea level, producing Malbec, Syrah and Tannat. The project is managed by Javier Vargas and his sister Mabel, with help from winemaker and agricultural engineer Gabriela Celeste.

Bodega Noemia is in the Neuquen province in the Rio Negro Valley, Patagonia – a region known for its winds, low humidity and therefore lack of disease. A green strip in the middle of a desert, the region receives very little rain but benefits from an abundance of water thanks to the Rio Negro River, which delivers glacial water from the Andes.

In 1998 winemaker Hans Vinding-Diers stumbled upon a “once in a lifetime” pre-phylloxera vineyard planted there in 1932, mainly to Malbec. Rediscovering the region’s historic vineyards, he made its first wines in 2001 with some fibreglass tanks and Bordeaux barrels. Later, Italian Countess and wine producer Noemi Marone Cinzano came on board and, understanding the potential, began building the project with Hans. The first vintage was released in 2003.

Today its focus remains Malbec, producing around 120,000 bottles a year, but is managed by just 8 people. Now owned by Vinding-Diers, the team is further investing in the region, having just purchased a neighbouring 35 hectare vineyard, and is working to create nursery to preserve the
historic genetic material in the surrounding area.

Bodega Anielo, also in the Rio Negro, was founded in 2010, with a vineyard first planted in 1998. Since then the team has acquired a second 20 hectare site, which included 1 hectare of old vineyards planted in 1932 and 4 hectares planted in 1947 – both pre-phylloxera and masale selected. The original winery, built in 1927, has been completely renovated and its winemaker, Federico Moreira, is working to better understand the ancient winemaking practices of Patagonia.

‘You need the right vineyard, the vision and the guts’

The notion of setting up a winery can be captivating, but it’s not for the faint-hearted. In a country where inflation is rife, with little or no government support, a small producer not only has to have great wines, but healthy margins. The small producers that exist in Argentina today have survived, and almost certainly have a high standard of wine to show for it.

“The great thing about being a small producer is that you have a real story and you have to live it,” says Hans. “It’s not something where you can just come and put the money down. You need the right vineyard, the vision and the guts.”

“Today people are more focused and there’s a lot of passionate people. The ones that exist today are the ones who survived, like us, and we can clearly see a future.”