The second part of a substantial whisky collection and one of the oldest malts ever-rebased by The Macallan will headline Sotheby’s first ‘Halloween’ sale at the end of this month, as the auctioneer’s newest department goes from strength to strength. 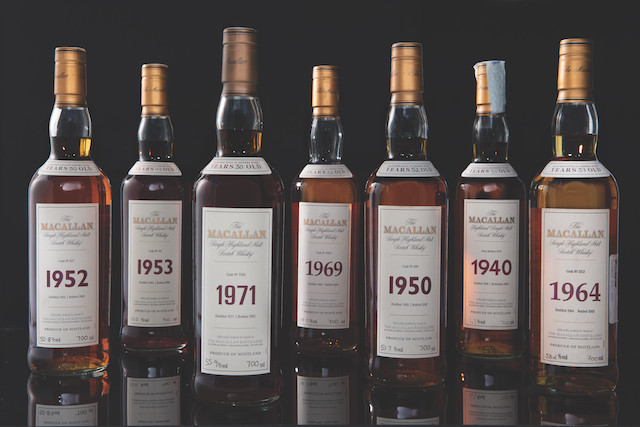 The sale on 31 October is now destined to be a fixture in Sotheby’s sales calendar and its flagship  auction for fine and rare spirits.

It follows the very first dedicated spirits sale last year which saw a record-breaking haul of £7.6 million, including a new record realised for a bottle of The Macallan’s Fine & Rare 60 year-old 1926, which went for £1.5m.

The success of rare spirits at auction has continued into this year, with some of the auction house’s top results in 2020 coming from whisky lots, Scotch and Japanese in particular.

Jonny Fowle, Sotheby’s spirits specialist, said: “After launching Sotheby’s Spirits business last year, this segment of the wine and spirits market has seen the fastest growth, not least during these past six months, with three new world auction record prices, and an increase in buying and bidding from both new and young collectors.

“The appreciation for whisky is incredibly diverse and our younger collectors are showing a keen interest in understanding the nuances of age, rarity and provenance, whether acquiring bottles for current drinking, special occasions, or to treasure for the future.”

Last year’s sale featured just the first part of an enormous whisky collection compiled by an American connoisseur and the next sale features ‘Part II’, as well as smaller consignments from other collections.

The sale spans 190 lots of Scotch, Japanese and Irish whiskies and is estimated to realise in the region of £800,000.

The sale will also feature a special lot consigned directly from The Macallan, six single malts aged 40 years-old and over – including the oldest spirit ever released by the distillery.

Proceeds from the sale of this lot will be donated to the charity City Harvest which distributes surplus food to vulnerable people around the world.

Full details will be revealed on 15 October when the new malts are officially announced by the distillery.

Fowle continued: “This season, we are thrilled to present the first of our annual spirits sales to take place on Halloween, not least with the second part of the Ultimate Whisky Collection and an opportunity for collectors to get their hands on a complete set of The Macallan’s new collection, so soon after its official launch. Our sale of part one a year ago – our first-ever single-owner spirits auction – marked an historic moment for the spirits market, with new benchmark prices and a fresh approach to selling whisky.

“This year’s offering, though lower in value, is testament to the quality of the collection in its depth and breadth. With The Macallan continuing to take the dominant pole position in our spirits sales, it is a real pleasure for us to open the auction with one of the most exciting launches in the world of collectible whisky in recent years.”