Diageo has unveiled an alcohol-free Guinness stout that will be rolled out in the UK next week. 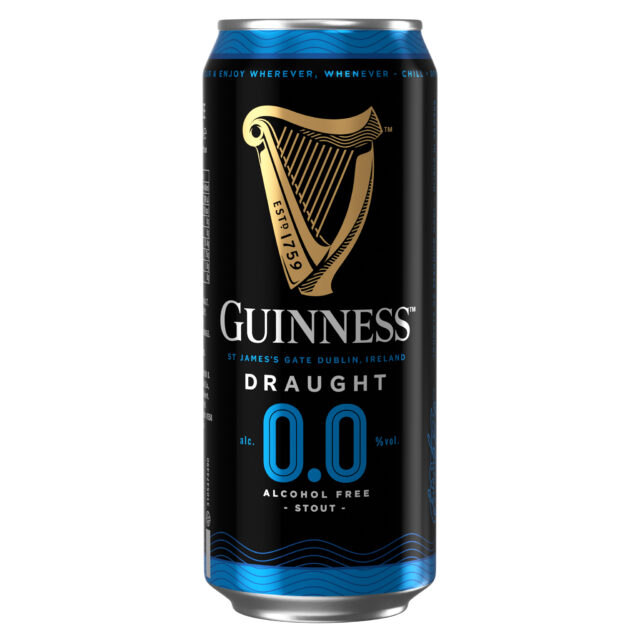 The beer, which was made at Guinness’ St James Gate brewery in Dublin, comes in at 0.0% ABV, contains 16 calories per 100ml, and will be rolled out in the UK from 26 October. A full 440ml can contains just over 70 calories, and a pack of four will carry a recommended retail price of between £3.50 and £4.50.

It is a de-alcoholised beer, where the alcohol is removed through a cold filtration method.

Most mainstream beers are either cold filtered to remove the yeast and bacteria, or heat pasteurised to kill all yeast and bacteria. Cold filtration allows the alcohol to be filtered out “without presenting thermal stress to the beer, protecting the integrity of its taste and character”, according to a spokesperson for Diageo, which owns the Guinness brewery.

The launch comes after months of rumours that Diageo was in the process of fine-tuning an alcohol-free Guinness recipe. Diageo’s global head of innovation, Michael Ward, revealed plans for a non-alcoholic stout during a media event last July outlining some of the company’s plans for new products. Months later, leaked photos seen by the drinks business appeared to show a packaging design prototype for Guinness 0.0.

“This is an exceptional day for Guinness, as we finally reveal Guinness 0.0,” Guinness’ global brand director Gráinne Wafer said.

“The launch of Guinness 0.0 highlights our long-held commitment to innovation, experimentation, and bravery in brewing, harnessing the power of our brewers and our ingredients, to create an alcohol-free beer that is 100% Guinness but 0% alcohol.”

Non-alcoholic and low ABV beers have become increasingly popular over the past decade, with big brewers like Heineken and Carlsberg launching alcohol-free versions of their own flagship beer labels and seeing sales rise as a result. Belgian brewer AB InBev launched a low ABV alternative to Stella Artois earlier this year, and has also pledged that low and no-alcohol products will make up 20% of the company’s entire drinks portfolio by 2025.

Booze-free drinks have also had huge success during lockdown. In the week to 9 May, sales of non-alcoholic beer in the US were up 44% compared to the same period last year, according to Nielsen.

Proof Drinks, which owns Cazcabel Tequila and beer brand Pistonhead, said it has seen sales growth of low and non-alcoholic products outpace alcoholic drinks during recent weeks of lockdown. Pistonhead Full Amber (6.0% ABV) saw sales growth of 238% in week one (22/03 v 29/03) versus Pistonhead Flat Tire (0.5% ABV) of 138%. But in weeks 3, 4, 5 and 6 of lockdown it is the non-alcoholic variants that have seen the greatest sales growth, increasing overall volumes each and every week of more than 70%.

5 LOW AND NO-ALCOHOL DRINKS TRENDS TO WATCH IN 2020