UK supermarket Morrisons has teamed up with Saltaire Brewery to brew a beer made using surplus bread from its bakery. 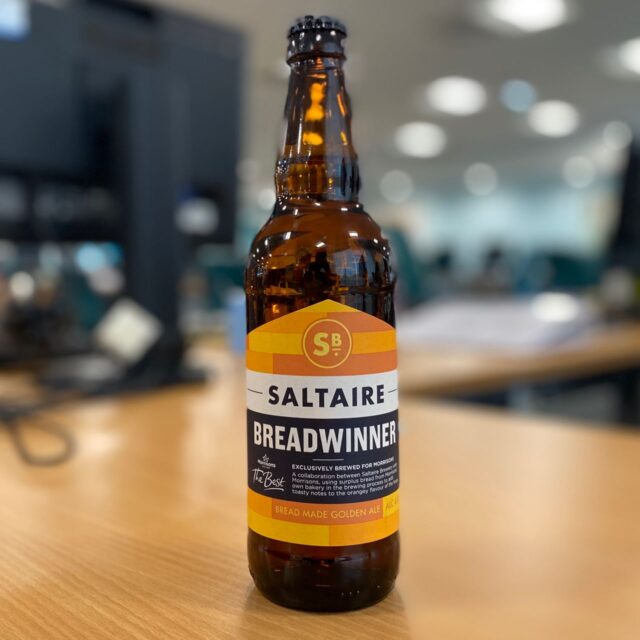 The bread, which is used to replace a portion of the malt, gives the beer “toasty notes” while the hops provide a “citrus kick”.

Jack ColeClough, Morrisons beer buying manager, said: “After launching Saltaire Brewery in a few local Yorkshire stores it was so popular that we now offer bottles across the country for customers to enjoy. We hope customers enjoy this beer because it tastes great and cuts down on food waste.”

Co-owner and sales director of Saltaire Brewery, Nick Helliwell, said: “This is another step on the journey in our partnership with Morrisons. Both companies value the support of local relationships, and this beer is another product of that principle.”

Saltaire has previously teamed up with the supermarket to provide the beer it uses in pies and burgers.

Helliwell added: “By its nature, Breadwinner pairs brilliantly with food, especially some of the other products that we produce together, such as Morrisons steak and ale pie, and this summer’s beef and ale burger, that are both really popular with customers.”

In 2018, M&S teamed up with Adnams on three beers produced using the crusts of sliced sandwich loaves. In the same year, Welsh brewer Tiny Rebel teamed up with frozen food specialist Iceland to produce Bread Board, a beer made using leftover bread from Iceland stores and bakeries.

Cereal giant Kellogg’s also ventured into brewing, partnering with Salford-based brewery Seven Bro7hers in 2018 to create a beer made with cornflakes that were either too big, too small or overcooked to make it through quality control. It has since launched similar brews made with rejected rice krispies and coco pops.

More recently British baker Warburtons teamed up with with specialist Toast Ale to create a brew using stale crumpets. Toast Ale started out in Hackney in London, making beer using surplus bread from bakeries and delis around the capital.

Similar projects include the Beer Project’s Babylone beer, made in Brussels from surplus bread from supermarkets, and Crumbs Brewing in Reigate, Surrey, which produces all its beers using leftover bread from local bakery Chalk Hills.

WELSH BREWERY, BAKERY AND DISTILLERY COLLABORATE ON GIN MADE FROM BREAD

FRIENDS OF THE EARTH, STROUD BREWERY AND TOAST ALE COLLABORATE ON ‘SUSTAINABLE’ ALE