Domaines Ott has launched a new luxury French rosé to augment the highly-exclusive £100+ pink wine club, and db is the first to taste it in the UK. 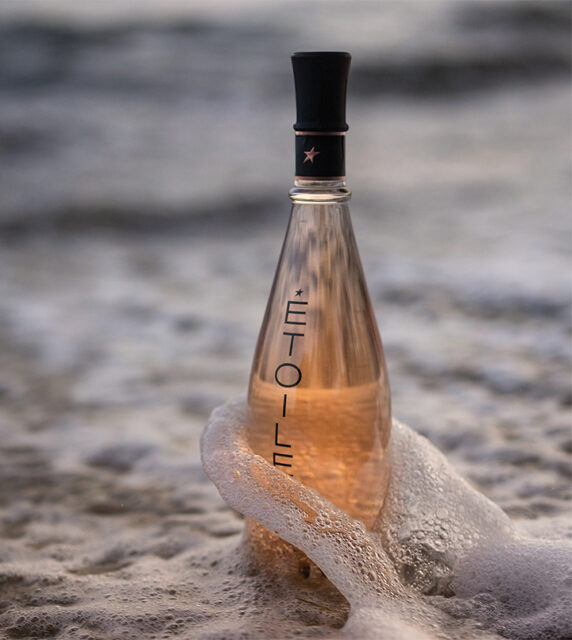 Notable about this latest release is certainly the price – costing £120, it is three times more than the former top-of-the-line pink wine from Domaines Ott: the £40 Clos Mireille, Coeur de Grain from Provence.

But also notable about this new rosé is the sourcing: it is not a Côtes de Provence.

That’s because the new launch is a blend of wines from three difference vineyards spread over two appellations: Côtes de Provence and Bandol. This means that it can’t take on the name of either highly respected pink wine producing regions – it is, in effect, a Vin de France, even though it doesn’t say it on the label.

In fact, the striking skittle-shaped bottle – a classic packaging cue for Provençal wines – simply features the brand name, which is Étoile, and producer: Domaines Ott.

The name, meaning star in French, is a written reference to the tiny star logo on all bottles of wine from Domaines Ott.

Jean-François Ott explained, “Étoile – meaning star in French – represents the little star that has guided us since the beginning of this family story: when our great grandfather used to sign his bottles of Ott the two ’t’s formed a little star; this is the same little star that appears just after the name Domaines Ott.”

But this wine, he added, “is also a tribute to our great grandfather, and his pioneering vision of rosés in general, and the wines from Provence in particular.”

As for the blend, according to Christian Ott, it combines the fruit from three Domaines Ott terroirs, which are Clos Mireille and Château de Selle in Provence and Château Romassan in Bandol.

“We wanted a wine that encompasses the characteristics of these three different domaines, to capture the salinity and moreish character of Clos Mireille, the finesse of Château de Selle, and the structure of Château Romassan,” he said.

Notably, the wine, which comprises 80% Grenache grapes and 20% Mouvedre from the 2019 vintage, has been partly aged in spherical ceramic vessels, which Christian said had been chosen to “highlight the purity of the fruit”.

The rest has been made and aged in stainless steel tanks. This approach is unlike other luxury £100+ rosés, such as Garrus by Château d’Esclans and Clos du Temple from Gérard Bertrand, which have been fermented and aged in oak barriques, like a fine white Burgundy.

Finally, commenting on the combination of wines from across three estates and two appellations, Jean-François Ott said, “It’s a blend we have created many times and one we wanted to share with our customers to remind them of our unique position in Provence.”

He added, ‘The idea of Étoile was to throw away the rule book; to create a wine that lives up to our expectations and our vision as winemakers of an outstanding Provence rosé.”

Having been lucky enough to receive one of the only sample available in the UK during lockdown, I tasted it at home on two separate occasions over the weekend, both in a professional setting, and another with food.

The wine was not sampled ‘blind’, but I did taste it unaware of its high price. In other words, my impressions weren’t penned thinking about whether the rosé offered good value, but whether it was a great example of its type – that is, a still, dry, unoaked pink wine.

And, bearing in mind the quality of rosés from Domaines Ott, you won’t be surprised to learn that it is.

The colour is in keeping with Provençal rosé – Étoile is a bright, pale salmon pink, the type of appearance that’s both pretty, and promises instant refreshment.

Aromatically, the wine is youthful, fresh, and open, with clearly-defined notes of peach, pear, orange blossom and pomegranate, but also a subtle creaminess, suggesting there’s depth to this rosé.

And, like great Provençal rosés, Étoile manages to combine oily-textured ripe fruit with a dry mouthwatering finish, meaning that the wine feels slightly weighty on the tongue, but fresh as it disappears down the throat – a dangerous combination if you lack self control…

It’s a layered wine, with peach, wild strawberry and white cherry, along with a touch of orange zest and pink grapefruit, as well as a palate-cleansing chalky character and gently salty sensation.

Overall, it is dry, persistent, and, in particular, pristine – everything about it seems so pure, bright and clean, from the appearance to the nature of the fruit.

While a highly impressive rosé, I’m not surprised it’s good… the component rosés from the 2019 vintage were among my very top scoring wines from this year’s 2020 Global Rosé Masters – with the Domaines Ott Clos Mireille 2019, when tasted blind, proving the best unoaked dry rosé of the competition.

I mentioned above that Étoile was the latest rosé to join a highly-exclusive pink wine club. Well, just two other still wines are currently members of such a circle.

Those are Garrus by Château d’Esclans and Clos du Temple by Gérard Bertrand. Like Etoile, both are dry Grenache-based rosés from France, and both retail for more than £100 – in fact, £120 and £170 respectively. However, they differ from the new launch from Domaines Ott in that both are barrel-fermented. Also, while Garrus uses grapes grown in Côtes de Provence, Clos du Temple doesn’t – it hails from a biodynamic vineyard in Languedoc, dubbed a ‘grand cru’ site by producer Gérard Bertrand.

Click here to read my thoughts on these two luxury rosés, which were the two highest-scoring wines in this year’s Global Rosé Masters.

Meanwhile, you can see all the medallists from this year’s Global Rosé Masters by clicking here, and, following such an extensive tasting, I also put together my thoughts on the top rosé trends of today, which you can read here.