The US government has announced that current tariffs on still wines made in France, Germany, Spain and the UK, as well as Scotch whisky, will remain in place, but that duties will not be raised to 100%. 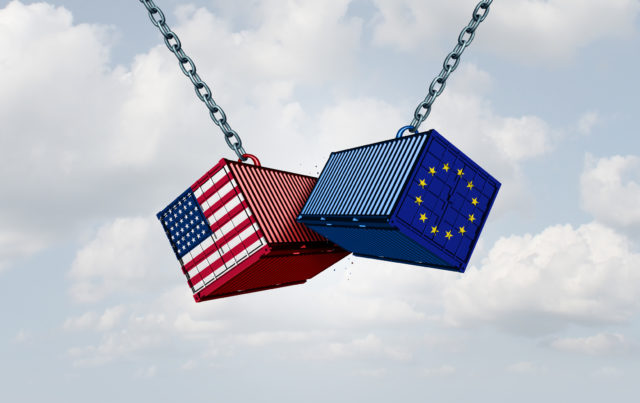 The United States Trade Representative (USTR) announced on 14 February that the current 25% import tariffs on still wine (not over 14% ABV) made in France, Germany, Spain and the UK, and transported in containers of 2 litres or less, would remain in force.

Also affected by the tariffs are Scotch whisky, single malt whiskey from Northern Ireland, and liqueurs made in Germany, Ireland, Italy, Spain and the UK.

In a review of duties in December 2019, the US government proposed raising tariffs by up to 100%, as well as subjecting additional EU-made wines and spirits to the tariffs.

The current 25% tariffs were implemented on 18 October 2019 and were authorised following a long-running dispute over subsidies given to Airbus over rival US aviation company Boeing. Back in June 2018, the EU imposed 25% import tariffs on all US whiskey imports.

After reviewing the case, the US government has decided to raise tariffs on aircraft imported from the EU to 15%, up from 10%, but to keep wine and spirit tariffs the same. The changes will come into effect on 18 March.

The US government will review the tariffs again in 180 days.

The USTR said it received almost 26,000 comments in response to its review in December.

The statement noted: “As of this time, the trade representative has decided not to increase the rate of additional duties above the additional 25% currently being applied to non-aircraft products.

“The US Trade Representative has also determined that going forward, the action may be revised as appropriate immediately upon any EU imposition of additional duties on US products in connection with the large civil aircraft dispute or with the EU’s WTO challenge to the alleged subsidisation of US large civil aircraft.”

Reacting to the news, chief executive of the Scotch Whisky Association (SWA), Karen Betts, said the industry body was “deeply disappointed” that the tariffs remain in place.

Betts added: “This tariff has now been in place for four months and is hitting Scotch Whisky producers hard, particularly small distilleries. We’ve seen a significant drop in exports already, and based on this we believe we could be facing at least £100 million in lost exports over a year.

“It cannot be right that our industry is continuing to pay the price of trade disputes that have nothing to do with our sector. It’s critical to us that UK-US trade talks now prioritise the urgent, early removal of all tariffs on whiskies. As a first step, we welcome the Prime Minister’s commitment that the UK government will remove EU tariffs on US whiskey as soon as possible now that the UK has left the EU. The UK government must work to ensure that the US reciprocates.”

The SWA’s views were mirrored by those of the Distilled Spirits Council of the United States (DISCUS).

In a statement, the group urged the EU and US authorities to remove trade barriers on spirits.

It continued: “The distilled spirits industry on both sides of the Atlantic has suffered enough. According to new data released this week from the US International Trade Commission, the EU’s 25% retaliatory tariff on American whiskey caused exports to the EU, the US spirits industry’s largest export market, to tumble 27% in 2019 compared to 2018.

“Global exports of American whiskey have declined 16% and global spirits exports are down 14.3% over the same timeframe. The longer these disputes are unresolved, the greater the threat of even more tariffs on our industry.  Specifically, the EU has stated it may impose retaliatory tariffs this spring on US rum, vodka, and brandy in its parallel case at the WTO concerning Boeing. In addition, the EU is scheduled to increase its retaliatory tariff on American whiskey to 50% in spring 2021.”

A statement by the US Wine Trade Alliance was more positive, however, it warned of continued damage to the US wine industry.

A spokesperson commented: “We applaud the administration on its restraint in not increasing or expanding the tariffs on European wine.

“Wine tariffs remaining at the status quo is a testament to the hard work put in by the wine industry, but it’s still a shallow victory. The administration’s refusal to remove the current 25% tariffs on select European wine will continue to hammer American business owners and consumers.”

A study commissioned by the Wine & Spirits Wholesalers of America (WSWA) found that with the current tariffs in place, the US alcohol industry stands to lose almost 36,000 jobs and over US$1.6 billion in wages, costing the US economy more than $5.3 billion this year.

WSWA president and CEO, Michelle Korsmo, said: “Our members…are already being negatively impacted by the imposition of retaliatory tariffs by China and the European Union on US-origin distilled spirits and wines – these tariffs will only increase that burden. We hope that the administration recognises the consequences to US business and encourage EU and US trade officials to reach a deal soon.”

“It’s been like the sword of Damocles hanging over our head for the past few months, hamstringing our every move,” he said. “Our normal business practices (eg. purchasing) are frozen until we have clarity. It’s dominating the share of mind in our entire industry that could be put to much better use.”

US IS A ‘REPLACEABLE’ IMPORTER OF EUROPEAN WINE

US AND FRANCE AGREE TARIFF TRUCE FOR A YEAR

SWA: US TARIFFS COULD COST INDUSTRY £100M IN A YEAR