C&C Group-owned beer brand Tennent’s has launched a new lager containing around the same amount of calories as a low ABV or alcohol-free beer. 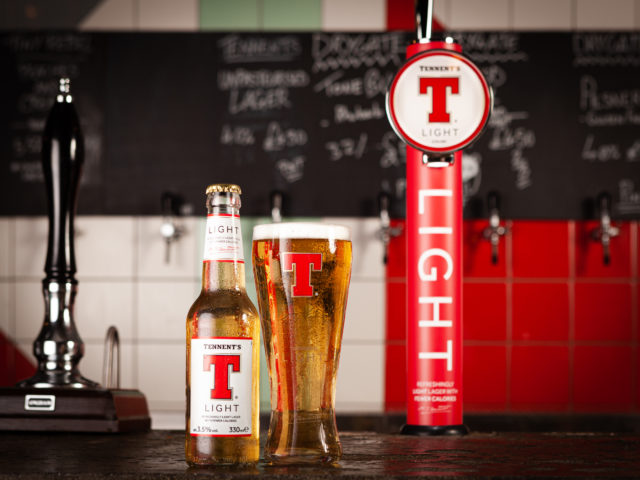 It has launched exclusively in the on-trade at sites in Scotland, and will be available both on draught and in bottle.

James Hughes, brand manager at Tennent’s, said: “Tennent’s Light has been developed recognising current consumer trends for local produce, authenticity and the growing demand for ‘low and no’ alcohol options. Additionally, our research told us there was a significant gap in the market for a beer that brings together great flavour, low calories and low ABV.

“We’re incredibly excited to introduce Tennent’s Light to the market. Our talented brewing team at Wellpark have spent months cracking the perfect recipe, which is not only low calorie and low ABV, but it also tastes great.

The launch comes as drinks manufacturers have become more transparent when it comes to the nutritional value of their products. Members of industry body Brewers of Europe, which includes groups such as the British Beer and Pub Association (BBPA) and Irish Brewers Association (IWA), recently committed to adding an ingredients list and calorie count on all beer bottles and cans by 2022.

At the start of 2017, Pernod Ricard said it would provide a web link to nutritional information on the labels of all of its strategic brands, following a report by the EU Commission inviting the trade to devise its own calorie labelling strategy. Other producers, including Diageo and AB InBev, have already made similar pledges, providing nutritional information on a voluntary basis through a combination of online information and on-pack labelling.

Tennent’s became the first alcoholic product in the UK and Ireland to display calorie info on its packaging in 2016.

Heineken has also said it will list nutritional information on its cider brand Bulmers in the UK, having changed the recipe for Bulmers Original to reduce its sugar content by 30%.

10 OF THE WORLD’S LEAST FATTENING BEERS