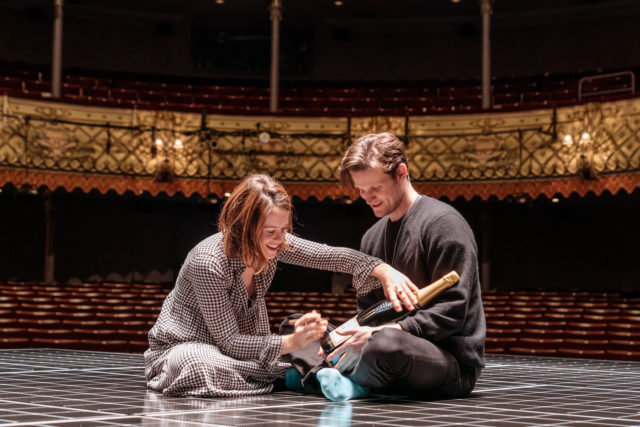 This week, in celebs signing Champagne bottles, Claire Foy and Matt Smith signed a jeroboam of Taittinger to celebrate their respective turns in Duncan Macmillan’s play about modern love and the climate crisis, Lungs, at The Old Vic, which finished at the weekend.

Taittinger is a corporate sponsor of The Old Vic. Our theatre-land spies tell us the signed jero will be used for a future fundraising opportunity. Watch this space.

A craft brewery in York was delighted to receive a picture of Dame Judi Dench sampling one of its beers – the Dame Judi Quench. 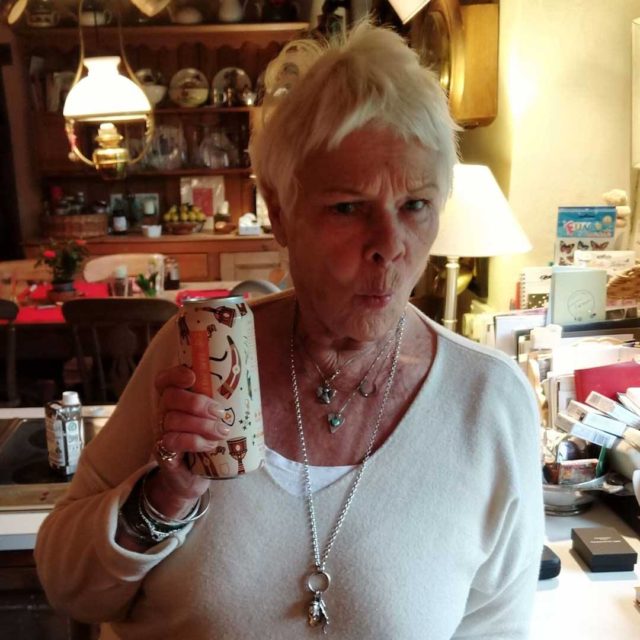 The beer was made by Brew York in collaboration with local beer bar and shop The House of Trembling Madness.

Managing director of Brew York, Wayne Smith, told db: “We were chatting to the bar manager Geo at a beer festival earlier in the year and decided to brew a beer together,” he said.

“Being two York based businesses, we wanted the name of the beer to reflect something famous form York, so one of the Trembling Madness team came up with the idea of Dame Judi Quench, which we loved.

Smith explained that his business partner, Lee Grabham, who is also the head brewer, once worked with Dench’s nephew, who is a regular at Brew York. He offered to take the cans to Dench, who now lives in Outwood, Surrey, for her to sample.

Her positive reaction has now prompted calls for the beer, which sold out in August, to be rebrewed.

In dangerous driving, Smokehead Islay Single Malt Whisky has been working with Brooklyn-based Ducati mechanic and builder Tyler Lunceford over the past nine months to build a one-of-a-kind, customised Ducati, inspired by vintage motorcycles.

The time came to reveal ‘The Smoker’ on Tuesday night (12 November) at The Bike Shed, a private members club for motorcycle enthusiasts (yes, it’s a thing). 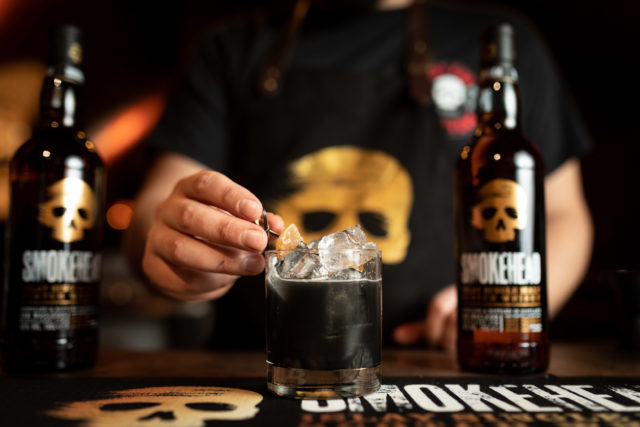 Cocktails made with Smokehead, Smokehead High Voltage and Smokehead Sherry Bomb were served throughout the night, including the creatively-named ‘Smoker’, created exclusively for the project; a robust mix of Smokehead, lemon juice, honey syrup, ginger liqueur, and activated charcoal (we are in Shoreditch, after all). 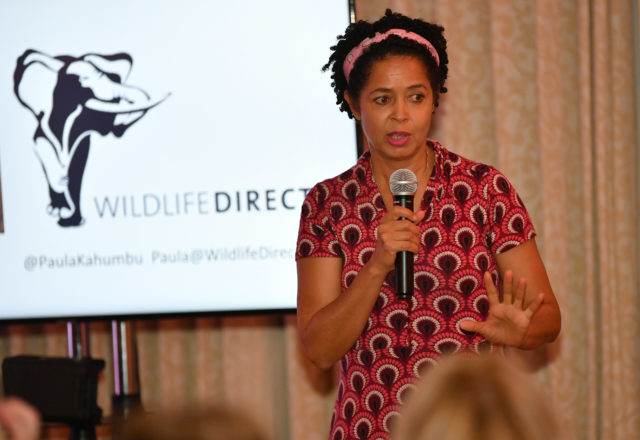 In less petrol-fuelled news, Amarula, together with its conservation partner WildlifeDirect, hosted key customers, members of the press and some of the Women in Travel Retail network at Kew Gardens’ Cambridge Cottage on Tuesday evening. Guests heard from Dr Paula Kahumbu (CEO of WildlifeDirect) who spoke about the important elephant conservation work she does. Some of this work is funded by donations from The Amarula Trust.

For each person attending the event, Amarula donated £100 to elephant conservation. 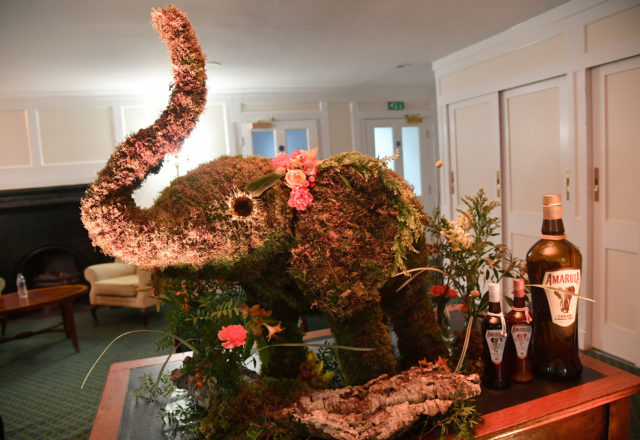 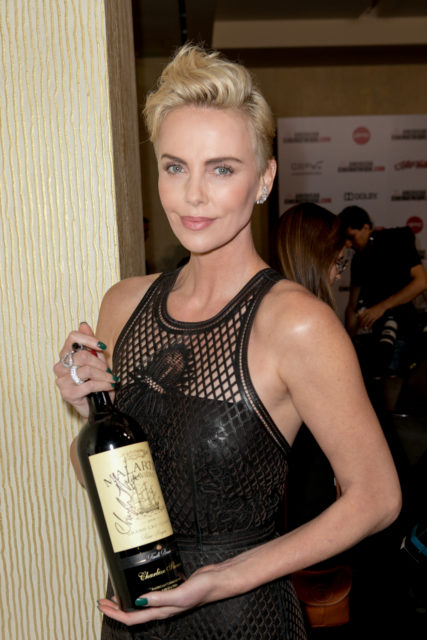 In Hollywine, the American Cinematheque gala evening in honour of Charlize Theron took place on Friday (8 November) at the Beverly Hilton Hotel.

As the event’s wine partner, Château Malartic-Lagravière’s wines were presented to the 700 guests of the actress.

In celebrity drinks launches, we headed to the Trading House in the Square Mile on Tuesday night to toast the launch of a new low ABV label, The Clean Liquor Co, which is headed up by none other than former Made in Chelsea star Spencer Matthews.

It was a star-studded event attended by Matthews’ nearest and dearest including Vogue Williams, sister in-law Pippa Matthews (ne Middleton), and close friends and former Made in Chelsea co-stars Hugo Taylor and Jamie Laing.

Matthews, currently co-starring with his wife in E4’s new series Spencer, Vogue and Baby too, began his TV career on Made in Chelsea.

Now, he is the CEO and public face of Clean Liquor Co, a new brand of distilled ‘spirits’ bottled at 1.2% ABV. The first drink in the range is called CleanGin.

We caught up with Matthews this week to find out more about his plans for Clean™ world domination.

“The ideal for me is that you should be able to go into a bar, and order any kind of drink you want, whether that’s a G&T or a rum and coke, and be able to get a Clean™ version of that,” he said.

Matthews told us he’s already got plans for darker styles that mimic whisk(e)y and rum. He and chairman Justin Hicklin have been working on the project since March, and the former MIC star said his patience was tested a lot as more and more low ABV and alc-free spirit products came on to the market.

“The thing that kept me sane was that I wasn’t really blown away by anything on the market, to be honest.”

In cocktail comps, congratulations goes to Simon Davey of London’s Trailer Happiness, who has won the UK leg of this year’s Angostura Global Cocktail Challenge.

Dacey will represent the UK at the final in Trinidad and Tobago in February 2020 against fellow finalists from 36 countries.

Davey won the judges over with two serves; the Queen’s Park Hollows and Eye of the Hurricane.

Work is well underway on a first of its kind: a city centre home for Durham Distillery, which is expected to open in early summer 2020.

The 5,000 sq. ft. space is undergoing a full refurbishment into a working distillery, and once complete will create local jobs with roles including a distillery manager and distiller.

Champagne Bollinger hosted an event at the Hôtel de Crillon in Paris last week, to mark the 40th anniversary of their partnership with 007.

Guest of honour Michael G. Wilson, one of the producers of the James Bond films, was joined by Étienne Bizot from the Bollinger family and an exclusive list of invitees.

The evening paid tribute to the shared history of the two brands dating back to 1979, when Champagne Bollinger become the Official Champagne of Britain’s most famous secret agent upon the release of Moonraker. 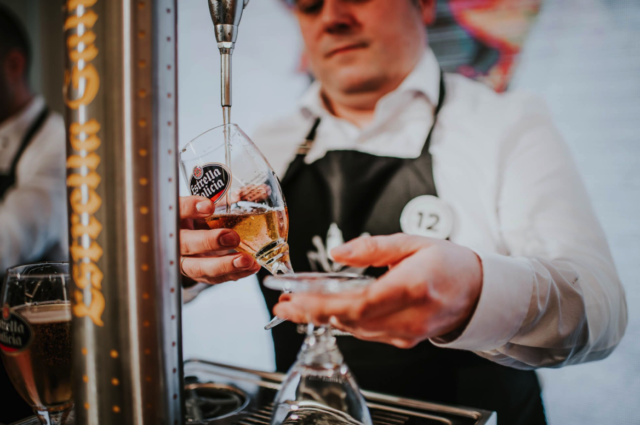 Bar workers will be treated to workshops which will shine a light on different beer styles (this being Estrella, with a focus on lager); service and pouring training; and a tasting and pairing session.

The final stage of the programme, hosted in London on 19 November, will see 20 members of staff from across the country compete for the title of Estrella Galicia Beer Master in the UK.

Competitors will be tested on their knowledge of beer culture, as well as their pouring skills in pouring and presentation. The winner will be invited to participate in the final in Madrid 2020.