The ‘world’s first’ glacier bar is opening in Iceland

Thrill-seekers can sign up to visit the “world’s first glacier bar” located at the Langjökull Glacier in Iceland. 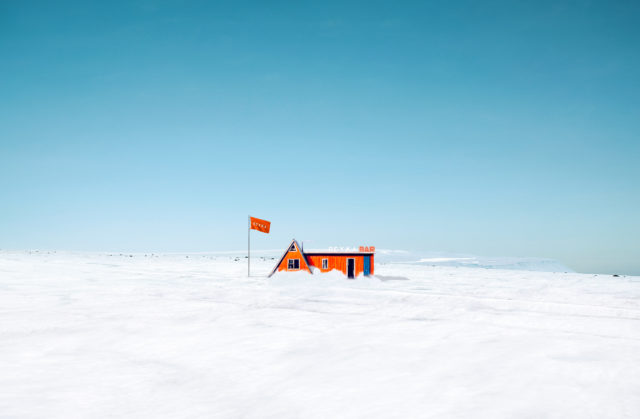 The bar has been set up by Reyka Vodka, taking experiential PR stunts to a whole new level. Literally.

The brand, which is owned by William Grant & Sons, claims to source water from the glacier for the vodka’s production. Langjökull, the nearest glacier to the capital city of Reykjavik, is the second largest ice cap in Iceland, at 935 square kilometres. At its highest point it sits 1,450m above sea level.

Vodka fans who want to visit the bar can sign up through Reyka Vodka’s website to be entered into a prize draw to win a trip to Iceland scale the glacier and hit the bar when it opens between 16 and 20 October.

If you’re feeling adventurous enough, you can make your own way there. Co-ordinates for the bar’s location can also be found on the spirits brand’s website.

Fabiano Latham, Reyka Vodka brand ambassador said: “We’re puffin-chuffed to bring the charmingly offbeat spirit of Reyka Vodka to the world with this one-of-a-kind, once-in-a-lifetime opportunity to drink our vodka in the world’s first bar on a glacier.

“Reyka Vodka is not just made in Iceland, it’s made of Iceland- so where better to host our Reyka Bar than at the very source- Langjökull Glacier.”

A number of drinks companies have been hosting adventurous pop-ups this year. Brewdog Distilling Co, the spirits arm of craft beer giant Brewdog, is leading consumers to a secret pop-up bar of its own in Scotland this week.

Daily clues as to the bars whereabouts will be revealed on Lonewolf’s Instagram and Twitter feeds, using the hashtag #wheresthewolf.

The scavenger hunt is similar to a stunt AB InBev-owned Busch Lager pulled earlier this year. Busch opened a pop-up store in the middle of a national forest in the US in July, offering hikers who successfully tracked down the activation the chance to win a lifetime supply of beer.