TV presenter, comedian and winemaker Graham Norton’s has gained his first UK listing for his new pink Irish gin, which goes on shelf in Tesco this month. 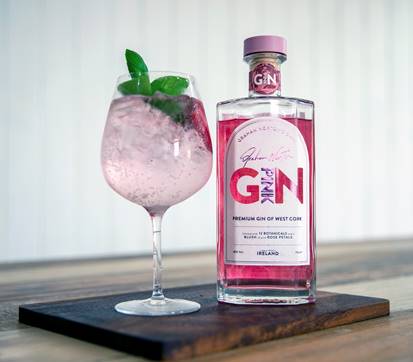 Graham Norton’s Own Irish Pink Gin, which was first revealed in a teaser video on Vimeo last July, has been launched by the same New Zealand company that produces Norton’s wine range, Invivo, and distributed in the UK and Ireland by Benchmark Drinks.

The new 40% ABV gin, which will be on shelf in time for Mother’s Day, is made from Irish grain and contains 12 botanicals including lemon peel, orange peel, elderflower, rose hip, and fuchsia flowers, along with an infusion of rose petals to give it its distinctive pink hue.

A second small-batch London Dry style gin, Graham Norton’s Own Irish Gin, will be released and go on shelf later in the year.

The idea for the gin was apparently hatched over a martini following a blending of the team’s 2018 GN Pinot rosé, Shiraz and Sauvignon Blanc wines.

“Great gin is a starting point. Add the right mixers, a favourite glass and a friend or two and you’ve got a recipe for something very special indeed,” Norton said.

The TV presenter first teamed up with New Zealand wine producers Invivo to launch a Sauvignon Blanc in 2014, and has since extended the range to include a rosé, Shiraz and a Prosecco, which was awarded a silver medal at The Drinks Business 2018 Global Sparkling Masters.

Sales of Norton’s eponymous wine brand are now sold in New Zealand, Australia, the UK, Ireland, the US, Norway, Denmark, Hong Kong and Japan, with the 2018 vintage topping 3 million bottles.

Gin has seen a huge boom in recent years, with sales in the UK now worth an eye-watering £191 million, up £13 million from 2017. Gin exports also rose 15% in 2018, to £612 million and combined with combined domestic and oversea sales breaking the £2.5 billion mark.