Diageo has revealed its plans for the restoration of Port Ellen distillery on Islay, featuring two separate distillation regimes that will both replicate the distillery’s original character and allow for more experimentation. 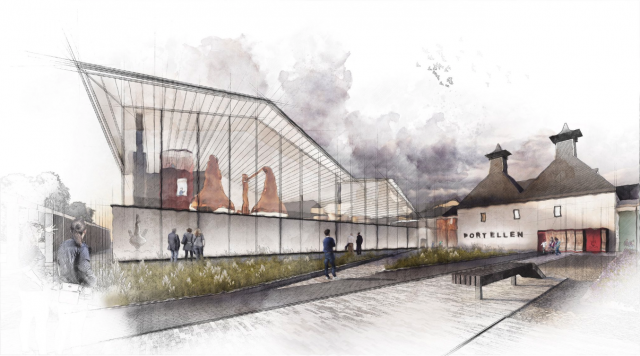 Diageo has unveiled its plans for the first time since announcing its decision to revive the so-called ‘lost’ distilleries of Port Ellen and Brora in October 2017.

The plans, unveiled at a public consultation yesterday (29 January), are due to be submitted to the Argyll & Bute Council later this year and feature two separate distillation regimes which will allow the distillery to both retain its original character and to experiment with different flavour profiles.

Diageo plans to fully restore the remaining buildings at Port Ellen, which was originally opened in 1824, and construct a new still house containing two pairs of copper pot stills.

The first pair will look to replicate the original stills at the distillery in order to recreate the character of Port Ellen’s spirit. The second and smaller pair of stills will be used to produce “alternative spirit characters” allowing the distillery to “experiment with new whisky styles”.

The experimental stills pay homage to previous Port Ellen owner John Ramsay, who helped to pioneer a series of innovative techniques in the 19th century that have since been adopted by many Scotch distilleries.

These include the use of spirit safe – now a feature of all Scotch malt whisky distilleries – which was first tested at Port Ellen distillery in the winter of 1823-24.

Archive records also show that Ramsay was exporting “significant quantities” of Port Ellen single malt to the US from as early as 1840. Between 1841 and 1843, he also experimented with distilling malt whisky in a Patent still, using continuous distillation now employed for grain whisky production. He was also an early adopter of the now-common practice of importing Sherry and Madeira casks for finishing his spirits.

Project implementation manager for Port Ellen, Georgie Crawford, said: “To have the opportunity to recreate the original spirit character of Port Ellen distillery so we have new generations of that classic Islay-peated malt is incredible, but then to combine that with the freedom to experiment with new variations is truly extraordinary.

Here’s a first look at our plans to bring the iconic Port Ellen distillery back into production. The plans which outline two separate distillation regimes will be formally submitted to Argyll & Bute Council later this year pic.twitter.com/JXmJXpZvF2

“Like the whisky, the plans for the building combine the best of heritage and innovation. We believe these plans are a fitting tribute to the exceptional legacy of Port Ellen and we are incredibly excited to be able to share them.”

The project will restore the old pagoda-roofed kiln buildings and warehouses, which survived demolition in the 1930s. These will sit alongside “spacious and modern light-filled new buildings” which will house the distillery equipment.

The restoration of Port Ellen is part of a £35 million project to restore the Islay distillery as well as Brora, based on the remote eastern coast of Sutherland, both of which closed in 1983.

In October last year, Diageo received planning permission from the Highland Council for its Brora plans, which involves restoring the distillery’s original buildings, which date back to 1819.

Pending approval of the plans, Diageo will aim to open Port Ellen in 2021. It joins Elixir Distillers’ new Islay distillery, due to start production in 2020, and the soon-to-be-opened Ardnahoe, as the island’s latest arrivals.