Revered within the craft beer world, Yellow Belly, an 11% imperial stout brewed in a collaboration between Buxton Brewery in Derbyshire and Sweden’s Omnipollo, may be discontinued due to a trademark dispute with another UK brewery. 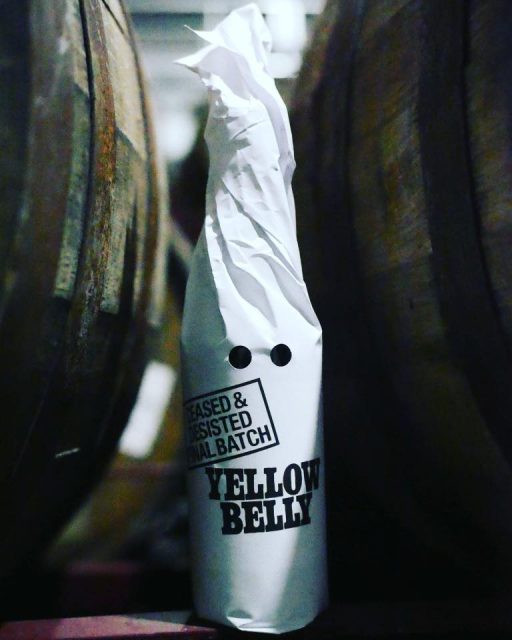 The collaborative brew was initially developed in 2014 as part of Berkshire brewery Siren’s Rainbow Project Challenge in which 14 breweries are paired up and tasked with creating a beer inspired by the colours of the rainbow.

Drawing yellow, Buxton and Omnipollo felt that the prime meaning of the colour was cowardice. Inspired by the political climate at the time, they developed a beer – an 11% peanut butter and biscuit Imperial stout (brewed with neither peanuts or biscuits) – and packaged it in paper deliberately designed to denounce organisations such as the Klu Klux Klan.

Created to promote open-mindedness and denounce racism and cowardice, Yellow Belly has since developed a cult following in the craft beer world, but now finds itself on the wrong side of a trademark dispute.

Batemans Brewery in Lincolnshire has also made a claim to the name. The brewer has produced a beer called ‘Yella Belly’ for the past 20 years with its current brew bearing the name being a 3.9% golden ale. It is believed to be the European holder of the ‘Yellow Belly’ trademark.

Yellowbelly, or yeller belly, is a nickname for people born in Lincolnshire, though the origin of the term remains uncertain. Possible causes that have been cited include the uniforms of the old Lincolnshire Regiment, a species of frog or newt found on the Lincolnshire Fens and sheep grazing on mustard fields.

The trademark dispute is being investigated by The European Union Intellectual Property Office (EUIPO).

Announcing the news on social media, Omnipollo wrote: “☠️UNBELIEVABLE😵. Forced to discontinue YELLOW BELLY (11%) after 5 yrs. Trademark lawyers🚪💥🕺🏾knocking down the door💆🏿‍♂️💆🏻‍♂️. Gutted. It’s been a wild ride over 50 countries🙏🏽thank you for making it happen. Furiously running with our BUXTON fam to put out the FINAL 2019 VINTAGE ”ceased and desisted” BATCH. Stay tuned for the next chapter…oh, and don’t be racist”.

Yesterdays announcement about YELLOW BELLY (11%) being discontinued whipped up a small storm🌪🍺Beer is our life and thank you for sharing every aspect of it with us🙏🏽®️Some background: Life isn’t black or white and after several attempts to come to an agreement the European trademark owner didn’t see a way for us to co-exist. On a positive note the American trademark owner (who has in no way been involved in this dispute) @sapsuckerfarms ❤️ got in touch last night to say that they are 100% cool w us using the name in the US. Right now we are focusing entirely on fulfilling the global 2019 vintage that is already in tank and will regroup to decide what the next chapter will look like after that. Don’t hate, innovate. #omnipollo #beereverything @buxtonbrewery

In a follow-up statement it added that the issue rested not with the American trademark holder, Sapsucker Farms, but with the European holder.

Sapsucker Farms, an organic farm in Minnesota which makes Yellow Belly cider, also wrote on its website: “Here in the USA, we own the trademark for “Yellow Belly” so fans of Yellow Belly beer jumped to the conclusion that we were the ones filing the C&D. So we started getting some pretty nasty messages from frustrated fans. Nope. It wasn’t us.

“We have been very aware of the other Yellow Belly for a long time. In fact, here in Minnesota, we work wth the same distributor too. And even though we own the US trademark for the name, the two Yellow Belly brands (ours and theirs) are so different, that we felt we could easily co-exist. We also liked what they are doing, so we have not felt the need to pursue any legal action. However, that does not mean that we aren’t concerned about protecting our trademark. We are protective of our trademark and we do keep an eye on what is happening here in the USA and evaluate each situation as it arises.

“Since this story broke, we have been in contact with Ominpolo and we really appreciate their help in straightening out the confusion regarding the parties involved.

“On another note, don’t be too quick to demonize the brewery who did issue the C&D. After all, they do own the European trademark, and none of us know any of the details involved in the case so we need to be fair to them as well. Likewise, Omnipollo and Buxton Brewery should have been more cautious about potential trademark infringement”.

Speaking to the BBC, Stuart Batement, managing director of Batemans said he hoped to reach a solution with the brewers involved.

He told the news site that he had been “surprised” by the ferocity of the online backlash, but maintained the importance of checking registered names before releasing products.

He added: “My logic on it is if various people that are going on social media and are adamant about the importance of the name Yellow Belly, then they appreciate there’s an importance in branding,” he said.

Geoff Quinn, owner of Buxton Brewery and Henok Fentie, head brewer for Omnipollo, told the BBC that they would avoid getting involved in any legal disputes.

While many have defended Batemans’ right to protect its trademark, fans of Buxton and Omnipollo’s beer have branded its actions as “childish”, “out of touch” and an attempt “to grab free publicity”.

Others have stated that while the names are similar, it would be difficult to confuse a 3.9% ABV Golden Ale with an 11% ABV Imperial Stout.

Trademark disputes in the beer industry are not usual. This year we have seen Sony take on California brewery Knee Deep Brewing over its Breaking Bad beer, MillerCoors and Stone Brewing battle it out, BrewDog finally win its appeal against the Elvis Presley estate, Portland’s Shipyard Brewing lose a fight against a Missouri-based brewer Logboat Brewing Co. and MillerCoors take on South Korean brewer HiteJinro.