Wine GB marked a new phase in the future development of English and Welsh wines with its first annual tasting in London last week, revealing a raft of measures it’s taking to propel the industry forward, including proposed tax relief for cellar door sales, a new PDO system post Brexit and the provision of viticultural courses up and down the country.

The creation of the new body to promote the English and Welsh wines was first announced in December, following the merging of two industry bodies: United Kingdom Vineyards Association (UKVA) and English Wine Producers (EWP).

Releasing its first research survey last week, Wine GB highlighted wine tourism, the building of its global brand, vocational training for the rural economy and government support as key areas with which to support the industry’s growth, within the context of Brexit and rising exports of English and Welsh wine.

“We are working with the government and we are conscious that we need to put this industry on the agenda,” said Wine GB CEO David Parkinson, speaking to the drinks business, pointing out that often officials are not aware of how big of fast the wine industry is growing.”

“When we have a meeting and we are giving a presentation the light bulb suddenly comes on. They look at the numbers and say ‘I had’t realised it was of that magnitude’. It’s a pretty big business and it’s growing at a ridiculous rate.”

Last year, a total of 5.9m bottles of wine were produced in the UK, with sales increasing by 31% between 2015 and 2017, according to the Wine GB survey, which it said was “impressive” given the heavy frost damage in April 2017.

Statistics released by the Wine and Spirit Trade Association last month said that nearly 4m of those bottles were sold in the UK on- and off-trade –  a 64% rise compared with the 2.36 million bottles released in 2016, according to figures from HMRC.

Looking to the development of other New World wine regions for inspiration, Wine GB drew the strongest comparisons with Oregon, in that it too comprises “lots of small, family run operations with very few big players involved”. Assuming a similar growth pattern, Wine GB anticipates that the English and Welsh wine industry has the potential to produce 40m bottles by 2040, which would make it a £1 billion business.

Currently, the UK has 2,500 hectares under vine, with around one million vines planted in 2017 alone and a further 1.7m expected to be planted in 2018.

And while many industries are preparing for the negative impact of Brexit, Simon Robinson, chair of Wine GB and the owner of Hampshire wine estate Hattingley Valley, said Wine GB is relishing the opportunities that the UK’s exit from the European Union will afford their industry, partly because the majority of its exports are outside of the EU.

“In terms of the cost we are a higher cost producer, but if Brexit results in a fall of the exchange rate that’s a win-win,” he said, highlighting the US as the market that will “probably be our biggest market at least for the next few years,” followed by Japan and perhaps Australia, with exports of wines from the UK expected to reach £350m by 2040.

“If the exchange rate fall, it it makes foreign goods more expensive and it makes our exports cheaper in the US and other markets,” added Parkinson. “It’s difficult to crystal ball gaze, but for us we are not concerned, and we are relishing the time that we can have our own PDO system in place. It suits this industry incredibly well.”

When it comes to trade agreements, Wine GB is currently in talks, among other UK-based wine and spirits bodies, with Defra and the UK International Trade Committee, putting forth its argument for tariff-free trade.

“The big producers of wine and the US, who will probably be our big customers,South Africa, Australia and New Zealand, they will want tariff free access to our market,” reasons Robinson, “so it should be a very mutually beneficial for them to give us tariff free access to their markets. It’s the same for the EU. It makes sense to have tariff-free access in both directions. We are one of the few industries that are assaying yes, let’s get on with it – it will be a success.”

Investment in the English and Welsh wine industries is also growing, with Robinson revealing that Hattingley had received speculative enquiries from three Prosecco and three Cava producers, some from Germany and a few Californians investigating the prospect of coming to the UK’s shores.

Champagne Pommery has already bought a vineyard in Hampshire for its Louis Pommery England brand, while Taittinger has planted vines at its Domaine Evremond in Kent, and Californian wine giant Jackson Family Wines has also expressed a serious interest in England for the group’s next vineyard investment.

“The point that we are making is that it’s a place where they can invest in that’s clearly capable of producing a very high quality product,” said Robinson. “From their point of view it’s easy to invest in the UK. We have all the infrastructure that you could need. We have a very rapidly growing industry that’s growing fast and we are sitting on one of the biggest wine markets in the world. It doesn’t get much better than that.”

One of the most tangible changes set to take place after Brexit will be the creation of an independent PDO system for English and Welsh wines. While details of what form this system might take is still under consideration, (with Sussex a little further ahead in the process within the EU framework), Parkinson said it will “need to be in place from the moment we leave the EU”.

“We have work to do with our members and discuss these proposals with our members,” said Parkinson, emphasising that any changes would need to give producer times to ‘catchup’ with the required quality so that all producers are able to continue selling their wine in the interim.

“It will probably be introduced over a period of time. If it launched by 29 March there wouldn’t be enough time so the industry needs a phased introduction so everyone can be prepared. The quality is extremely high and improving. We want any legislation to be a reflection of that.”

Addressing criticism over the organisation’s logo and name, which was decided following a consultation with the industry, Parkinson cited the importance of using the ‘Great British’ name for the purposes of tapping into export markets, which he said is more important than any confusion that could be caused by the term “British Wine”, while also offering an umbrella term for both English and Welsh wines.

Upon the unveiling of its logo, the group’s branding was criticised for being too nationalistic, and also for emphasising British wine, which is in fact made from imported grapes or grape concentrate then made into wine in Britain, not from UK-grown grapes.

The circular logo comprises a bunch of grapes, topped with a crown-like stem, set upon a union jack flag, which is intended to highlight the growing international reputation of its wines, and is circled by the ‘Wines of Great Britain’ text. WineGB is the shortened form of the organisation’s name, and will be used in the majority of its marketing.

“This is a great confident brand,” said Parkinson, who also made the point that to the average consumer, the term ‘British wine’ “doesn’t mean anything at all”.

“The design is very prominent and striking that I think stands out and in the exports market that is going to be important part of the equation,” said Parkinson.

“I think the Britishness of the brand, particularly in the US, is a very important aspect. Choosing a brand that endorses an internationally recognised quality level is really important.”

Robinson added: “British is more important to export markets. The Department of Trade is running a British campaign. That’s not a reason for choosing the Wine GB brand, but British resonates more strongly than England. We are certainly not banging the drum for an nationalistic or jingoistic, but we are a national association.”

Branding aside, Parkinson said securing funding from the government for marketing purposes, pointing to Australia’s recent $50m grant for marketing and export activity, was high on its list of priorities, adding that it needed to be at Prowein next year “telling the world just how fantastic the quality of this country’s wine is”. 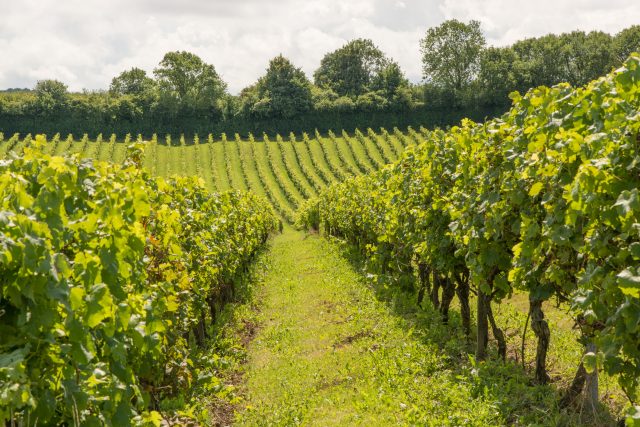 Ensuring that there is the infrastructure and work force to support growth is another consideration for Wine GB, which reported that while an estimated 2,100 people are currently directly employed by the English and Welsh wine industries, that figure could grow to 24,000 by 2040.

“We are working with Plumpton and agricultural colleges with the aim of launching satellite courses with Plumpton across the wider agricultural centres around the UK,” said Parkinson, with the aim of ensuring that specialist viticultural courses are available in a greater number of locations. “We need to ensure that the skills we are offering are relevant for our needs, but will also be relevant 20 yeas from now. Should we have courses on wine tourism for example?”

“The industry desperately needs people to prune the vines and we don’t have domestic that skill set at the moment,” said Robinson. “The farmers are equally concerned about it because the horticultural crops rely on overseas workers more than we do in many respects. They need them more then we do.”

Wine tourism is also a focus, which Parkinson rightly says will be an increasing part of the offering of the industry that will benefit not only the wineries and growers, but the infrastructure around it – hotels, restaurants, retailers and “even petrol stations”. As part of this effort, Wine GB is proposing some kind of tax relief for producers that offer cellar door sales.

“There’s a wealth of research particularly in New Zealand that shows that the international wine tourist spends 80% more than the average tourist, which is a huge uplift,” he said. “What will that means for the facilities to have hotels and restaurants as part of the offering on the winery context is a really important part of the market. How we have looking at California and Australia and New Zealand to get a feel for what might work for us.”

Finally, the survey notes that sparkling, unsurprisingly, wine currently accounts for 68% of wine production in the UK, with Pinot Noir the most popular grape variety, followed by Chardonnay.

However while the UK’s calling card remains its fizz, Robinson believes there is scope for still wines to make a greater impact in the future. While still wines made from the classic Champagne varieties will appear, Bacchus was highlighted as the variety with the best opportunity for becoming the UK’s flagship variety.

While its success remains to be seen, Parkinson compared its potential with that of Sauvignon Blanc in New Zealand, boldly predicting: “Bacchus could be our equivalent”.