Having been blown away Simon Rogan’s pop-up Roganic back in 2011, Lucy Shaw returns to its reincarnation on the same street in Marylebone to see if lightening can strike twice. 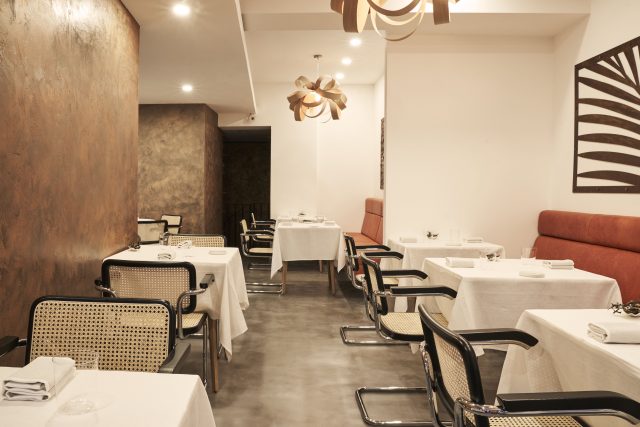 The concept: Back in 2011 chef Simon Rogan gave Londoners a taste of his two Michelin-starred farm to table flagship L’Enclume in Cumbria, where most of the ingredients are sourced from his nearby farm, at his Roganic pop-up, which made a hero of locally sourced seasonal organic ingredients.

With a dream team that included sommelier Sandia Chang and manager Jon Cannon, who have gone on to shine at Bubbledogs and Neo Bistro respectively, Roganic blazed brightly on Blandford Street for two years before Rogan went on to head up Fera at Claridge’s after Gordon Ramsay left the building.

In a happy twist of fate, Roganic re-opened this spring on the same street of its original incarnation, only this time it’s here to stay. A number of the original staff have returned to Roganic 2.0, including head chef Oliver Marlow, who worked at the original as a chef de partie, and affable general manager James Foster, who makes you feel instantly at home when you step through the door.

The décor: The food is the star of the show here, and little in the décor detracts from it. The space is bright and convivial. White walls are interspersed with earthy flashes of colour, from the burnt orange leather banquettes to the quirky light fittings crafted from ribbons of wood.

While Rogan hasn’t done away with white tablecloths, with its friendly staff and eclectic soundtrack featuring everything from Bryan Ferry to De La Soul, the space is pleasingly informal.

The room was buzzing with a colourful mix of characters during my visit on a sunny Tuesday lunchtime, including a lady dining solo in one corner who wore her wide brim hat and sunglasses throughout.

The food: Rogan has long been one of my favourite chefs – some of the best meals of my life have been cooked by him, so expectations were unnaturally high. Fortunately, they weren’t just met; they were surpassed.

Having written the rest of the afternoon off, my companion and I settled into our seats just after 1pm and enjoyed a four-hour journey taking in the textures, sights and smells of the Cartmel countryside from the comfort of our table.

For the ultimate Roganic experience it’s worth ordering the full tasting menu – a joyous ensemble of 18 courses, which sounds intimidating, but many are tiny bites that dance across the palate with an astounding lightness of touch.

The courses are perfectly judged, leaving you perfectly satiated but in no way button-poppingly full. The tasting menu is a play of three acts, opening with six amuse bouches, moving on to six larger dishes and ending with six sweet treats.

It would be dull for you, dear reader, if I described each dish in minute detail – many of them have to be seen to be believed – but what almost all of them shared was the killer combination of exquisite presentation, intense flavours, tantalising textures and fanatical attention to detail.

Signature dishes: From the first appetiser – a pair of pretty preserved raspberry tarts that look like they’ve been plucked from Alice’s wonderland, you know you’re in the hands of a man with an instinctive understanding of flavour, as earthy beetroot and tart raspberry collide on your tongue in a sour explosion.

One of the surprise highlights of the lunch was a modest amuse bouche of ‘seaweed custard’ and caviar, which was one of the most comforting and joyful dishes I’ve ever eaten. Speckled with pea green dill oil, the warm, creamy custard tasted like a heavenly fish pie and had the textue of a crème brûlée.

Another blinder of a dish were the pork, eel and hay cream bites – their white, Rice Krispies-like exteriors hid salty, fatty, smoky chunks of eel and pig that blended so seamlessly, it was impossible to tell where the eel ended and the pork began.

Marlow also showed his flair in a simple scallop dish served in its shell with a gooseberry and apple granita redolent with whispers of anise from wisps of tarragon in a dreamy combination of floral, sweet and tart flavours.

Mention must also be made of the painfully pretty dry aged duck. Served as a perfectly pink sliver adorned with bright blue cornflowers and clear discs of kohlrabi, the inclusion of daubs of thick, sweet, Chambord-like raspberry sauce was inspired. As was the accompanying quenelle of impossibly creamy parsley root mash.

The drinks: The best way to enjoy the tasting menu is to be left in the capable hands of Roganic’s ebullient sommelier Gaia Serafini, who will walk you through the wine pairings and explain how they help enhance the flavours in the food.

With a focus on organic, biodynamic and ‘natural’ wines, some of the pours were a little too left field, especially the opening offering – an orange wine crafted from the Vitovska grape high in the hills of Friuli in northern Italy, which was lacking in fruit and charm.

Much more agreeable was a rich, textured Marsanne/Roussanne blend from Domaine Bernard Gripa in Saint-Péray in the northern Rhône. Equally delightful was a raspberry-laced Barolo from Principiano Ferdinando, which was surprisingly approachable for its youth and paired perfectly with the duck.

Who to know: All of the staff I encountered were incredibly friendly, but GM James Foster and sommelier Gaia Serafini particularly so – seek them out on your visit and you’ll be well looked after.

Don’t leave without: Saving time (and room) for the desserts. Oli’s caramelised apple has become so popular (and Instagrammed) that he’s scared to take it off the menu for fear of causing a public outcry.

Crafted from razor-thin ribbons of apple curled into a perfect hockey puck-shaped circle resembling a caramel coloured liquorice wheel, the pud is incredibly fiddly to make and unbelievably tasty to eat, once you’ve mustered the courage to destroy its perfect folds with your fork.

Another highlight from the petit fours section is the crumbly juniper fudge, which cleverly captures the cooling freshness of juniper in gin, and leaves you craving both another cube and a tall G&T.

Last word: I think you can tell by this point that I enjoyed my lunch at Roganic immensely. There were only the tiniest of missteps during the meal – a fermented red cabbage and apple drink that was on the wrong side of funky and a too subtle flamed cod dish, which felt out of place in the line-up.

The meal confirmed my belief that Rogan is the most talented, daring and exciting chef working in the UK today with an unrivalled ability to consistently deliver powerful flavour combinations in elegant ensembles that please the eye and tease the palate. Props must also go to head chef Oli Marlow, who is executing Rogan’s exacting vision with admirable and enviable skill.

For those who can’t afford to splash out £115 for the full tasting menu, the £40 set lunch offers a six-course snapshot of some of the highlights, including the raspberry tarts, dry aged duck and juniper fudge. Rogan is at the top of his game and London is all the richer for Roganic’s return.