The 2017 harvest in Bordeaux is the smallest in over a decade, with the equivalent of 300 million bottles destroyed due to last year’s frosts but while some appellations were effectively wiped out, a very few enjoyed bumper crops. 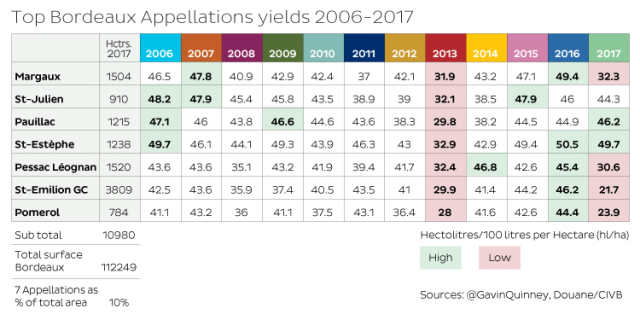 Building on his initial look at the state of the vintage late last year, local winemaker and commentator Gavin Quinney has dived further still into the minutiae of the losses both at the macro and appellation level.

Yet, as noted by Quinney and others last year, the effects of the frost were very far from uniform and as Quinney noted: “The figures also confirm that 2017 was a year of dramatically mixed fortunes for those viticulteurs, and this was chiefly down to the varying levels of impact of the late spring frost at the end of April 2017.”

As he goes onto say, Pauillac, St Estèphe and St Julien actually managed larger crops in 2017 than the average over the five preceding vintages.

St-Estèphe too came close to matching its 2016 crop and was comfortably above the lows of the 2013 harvest.

On the other hand, while the news from those three AOC is not disastrous, look anywhere else and the toll is much, much heavier.

For Margaux, Pessac-Leeognan, Saint Emilion’s grands crus and Pomerol, 2017 represents one of the smallest harvests in a decade; the smallest in fact in all but Margaux, with the Right Bank communes especially badly hit.

Move outwards to the communes producing Bordeaux rouge, rosé and blanc, Côtes de Bordeaux, Médoc and Graves and so on and the reports are grimmer still.

Although the Médoc and Graves and Côtes de Bordeaux managed slightly larger crops than in 2013, all the rest are smaller – for Sauternes and Barsac in particular – and they 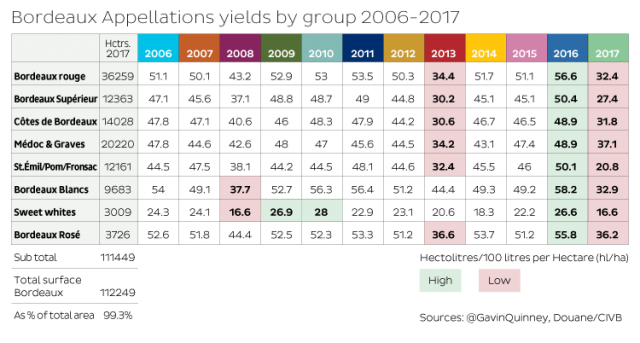 are all, without exception greatly reduced when compared to 2016.

Quinney states: “The pretty Saint Emilion ‘satellite’ appellations, covering close to 4,000 hectares, were nearly two thirds down on 2016. St-Emilion itself comprises two large appellations, St-Emilion Grand Cru and St-Emilion. Combined they were down 56% on the generous 2016 – from around 34 million bottles to less than 15 million.”

This is, by its very nature, still a broad overview and actual volumes produced by individual estates within both badly and barely hit AOC are sure to differ considerably.

It is also not a commentary on the quality of the wines being produced, the proof of which is still to come later this spring.

Despite the lucky escape had by a few of the top AOC, which should ensure decent volumes of some leading crus classés for this year’s en primeur campaign (depending on how much they decide to release of course) but it is clear that, more widely, the engine room of Bordeaux has had lumps taken out of it and as Quinney concludes: “For many hundreds of growers, surviving the impact of the frost damage is going to be tough, especially with two low-yield years from the last five. For those châteaux that escaped the worst of the frost, 2017 has turned out rather well. But I sense they won’t be shouting about it out of respect for their neighbours and friends.”