As one of the world’s most famous wines, Chablis has a reputation for quality. But familiarity with the brand means drinkers sometimes fail to delve deeper. the drinks business was determined to put that right, and ran a series of masterclasses extolling its virtues. 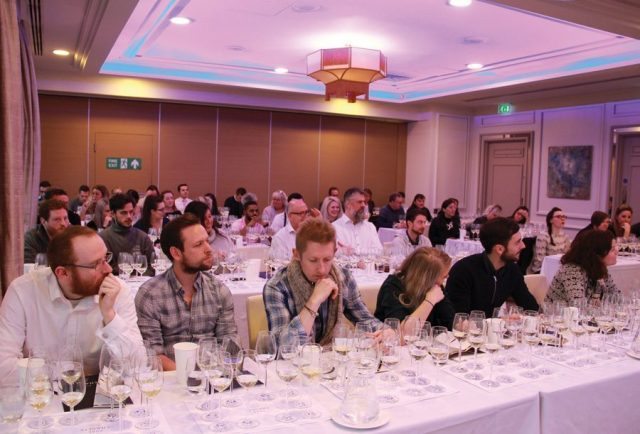 Everyone knows Chablis – and that’s its great strength, right? Well, it’s certainly one of the world’s most famous regional wine brands and, as a result, there’s barely a wine list or retailer without it.

However, such global recognition can be a weakness – and that’s because it doesn’t invite discovery. There’s a sense among wine buyers that Chablis ticks a particular box – delicate Chardonnay – and that’s it. But there’s so much more to Chablis than that.

It’s an area of different quality tiers, varied styles, and, importantly, a place of change. So, because we felt that not enough people were exploring Chablis fully, we decided to organise a series of masterclasses in the UK in association with The Bourgogne Wine Board (BIVB). These events had one aim in mind: to encourage the trade to rediscover Chablis and in doing so, realise the diversity an dynamism of this great region.

Hosting the masterclasses was writer and wine educator Michelle Cherutti-Kowal MW, who recently ran a packed series of UK-based events on ‘accessible’ wines from Bourgogne in partnership with the drinks business. And, like the events on Bourgogne, the classes on Chablis took place around the UK, with two-hour sessions in Oxford, Exeter and Belfast. Starting in Oxford during the summer, Michelle introduced Chablis to a range of restaurateurs, bar managers and retailers from the university town by focusing on what makes the region unique. 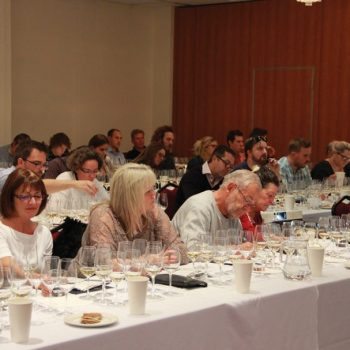 FRESH STYLE
The first crucial element to the inimitable nature of Chablis is the region’s climate. Located in the northern part of Bourgogne, it is on almost the same latitude as Champagne.

This explains the fresh style of Chablis, a white wine with a relatively low pH and ABV, and in terms of taste, one with “elegance and brightness”, according to Michelle. The location also makes the region challenging for viticulturists, particularly because Chardonnay (which is, of course, the sole grape of Chablis) flowers early – at a time when frost is still a threat.

But the other key defining aspect to Chablis is the soil. Based on limestone formed during the Kimmeridgian period – more than 150 million years ago when the region was under a warm, shallow sea – Chablis is famous for its white soils containing fossils of small oysters, called exogyra virgula. “Not many other places are so tied to its soil, and the Kimmeridgian limestone, which is bound together with hard clay, forces the roots to go deep; it challenges the grapes, so there aren’t huge yields,” explained Michelle, adding “it’s also a cool soil, which doesn’t aid ripening.” Michelle then noted that Chablis may be northerly for Chardonnay in Europe, and feature cool soils that are rich in Calcium carbonate, but it’s not actually a very wet area.

Describing the region as a semicontinental climate, she said the average rainfall is below 700mm, and said if water is ever applied to a vineyard, it’s only to spray on the vines for frost protection. These factors in combination – a northerly location, semicontinental climate, and clay-limestone soils – mean Chardonnay in Chablis finds a unique, yet fragile equilibrium where it reaches maturity without every over ripening.

The Chablis Wines masterclasses were an initiative from the BIVB and were organised in association with the drinks business in the UK.
Hosting the masterclasses was writer and wine educator Michelle Cherutti-Kowal MW, who recently ran a packed series of UK-based events on ‘accessible’ wines from Bourgogne. The Chablis masterclasses were held in:
• Oxford on 10 August
• Exeter on 31 October
• Belfast on 21 November

And it is these influences that produce the particular style of Chablis that has made it so well known and well liked: a white with elegance and purity. However, as mentioned at the outset, there are a range of expressions within the region, even though it is small: fewer than 5,000 hectares of productive vines are found in Chablis, which yield around 35 million to 40 million bottles annually.

The majority of the region’s output, accounting for 66% of production, is AOC Chablis, followed by Petit Chablis with 19%, Premier Cru with 14% and Grand Cru with just 1%.

Beginning with Petit Chablis, Michelle said that this quality level was “a really nice way to introduce people to the region,” adding that it is designed more for everyday drinking, and, although it has the leanness and freshness of Chablis, Petit Chablis is less expensive, and tends to be less long-lived. This entry-level appellation is found on limestone-based soils that were formed during the Portlandian period, and has less clay and fossils than the Kimmeridgian limestone of AOC Chablis.

Having tasted two examples of this quality level with the attendees, Michelle then said: “We sometimes forget that there is Petit Chablis, but it’s a great and accessible entry point to Chablis, and, in terms of food pairing, it would be a very good option for brunch by the glass, or at lunchtime, and would be excellent with eggs or chicken.”

STONY TEXTURE
Moving on to Chablis, Michelle said that the Kimmeridgian clay of the appellation gave the wines a ‘stony’ texture, adding that such wines were best served with food, particularly oysters or crayfish, “but not something as rich as lobster”. 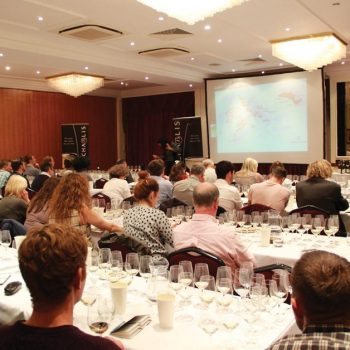 Continuing, Michelle said that Chablis is great with fish, but preferably with butter rather than cream-based sauces, and recommended: “Chablis is great with Sashimi.” In terms of winemaking, Michelle said both Petit Chablis and Chablis tend to be fermented and aged in stainless-steel tanks, and for Chablis, where oak is used, it is generally older, and employed to add a bit of texture, but not oak-sourced flavours such as vanilla.

With Premier Cru expressions next, Michelle said that generally the wines show more ripeness and richness than the Village Chablis appellations, and one can expect more “layers of flavour”. Such a change stems from the nature of the terroir – Premier Cru sites tend to be on slopes, giving more sun exposure, better drainage, among other specific characteristics depending on the exact plot.

Indeed, Michelle said there were 40 pieces of land, or Climats, giving 40 Premier Cru styles, although 17 of these have become the “flagbearers”, with the most famous being Mont de Milieu, Montée de Tonnerre, Fourchaume, Vaillons, Montmains, Côte de Léchet, Beauroy and Vaucoupin. Some of these Climats produce wines that are zestier, such as Montée de Tonnerre and Côte de Léchet, while others yield something fruitier, like Beauroy and Fourchaume.

Having sampled a Chablis Premier Cru from Fourchaume, Michelle said: “This is one of the fuller Premier Cru, and this is the ripest wine we’ve had so far.” She also pointed out that it was a wine from La Chablisienne, which is a cooperative that covers 25% of the entire Chablis region, and one of the most quality-minded in the world, with vineyards “in all the top sites; it has a fabulous reputation”.

Chablis is on tour in the UK again in 2017, and once more, writer and wine educator Michelle Cherutti-Kowal MW will lead a range of masterclasses designed to help trade buyers re-discover Chablis. Similar to last year, Michelle will present a selection of all four styles of Chablis – Petit Chablis, Chablis, Chablis Premier Cru and Chablis Grand Cru – and explore the stylistic nuances between each appellation (and even between right and left bank Chablis Premier Cru). She will also show why these wines work so well in the on-trade and independent sectors, and talk about how these classic examples of Chardonnay are perfect for adventurous food-matching. The Chablis masterclasses, in association with the drinks business, will be held in Cambridge on 13 February and Cardiff on 15 May. For more information please contact sheila@thedrinksbusiness.com

THINK BEYOND SEAFOOD
Because of the range of styles within the Premier Cru quality designation, Michelle noted that the food-matching options were large, but urged attendees to think beyond just seafood and fish.

“You can find that Chablis Premier Cru with some bottle age is suitable with dishes such as veal because the wine builds layers of flavours as it ages – yes, Chablis can be great with meat.” Now it was time to look at Chablis Grand Cru, which, Michelle said, was all located on the steeply-sloped right bank of Le Serein, the river that runs through the region. This top-level appellation incorporates an Amphitheatre of vineyards facing full-on south, as well as southeast and southwest.

Divided into seven Climats, Michelle said that aspect is not the only thing important to the style, but how far up the slope the vineyard is located. The south-facing slopes ensure that the vines are protected from northern winds, and receive maximum sun exposure. This combination of light, protection, and reflected light and heat back from the Serein River ensure that Chablis Grand Cru is the fullest expression of the entire region.

This richness is augmented by rules that stipulate that wines are left on the lees until 15 March of the year following the harvest, while it is common for producers of Chablis Grand Cru to use barriques for fermentation and ageing, including a proportion of new oak. “How much oak the winemaker uses makes a difference, and it can add a marzipan nutty layer to the wine, which, as the wine gets older becomes honeyed.”

This bigger, weightier and more complex style of Chablis does widen the food-pairing possibilities yet further, and Michelle listed foie gras, lobster, oily fish and wiener schnitzel as good matches for Grand Cru wines. She also stressed that these were wines designed for ageing.

Summing up, Michelle said that in general the lighter the wine, then the lighter the food one you should choose to go with it. As for the rediscovery of Chablis, Michelle urged the attendees to consider the different quality levels and Climats of the region, noting that it is a varied area that rewards exploration. However, she also said, because it’s all planted with just one grape, relative to so many other wine regions of the world, Chablis is “super easy” to understand.

> Bourgogne covers almost 30,000ha (4% of the French vineyard area), and Chablis covers 19% of this (around 5,000ha)
> Chablis produces 35 million to 40 million bottles annually
> Two out of three bottles of Chablis are exported
> Chablis is based on limestone that was formed during the Kimmeridgian period
> The region is planted entirely with just one grape: Chardonnay
> Chablis contains four levels of AOC wine: 2 Village appellations: Petit Chablis and Chablis; 1 Village Premier Cru appellation; 1 Grand Cru appellation