Tesco has launched its first own-label “Bottled Conditioned” Golden Ale, which will be accompanied by Camra (Campaign for Real Ale) design cues on the shelf. 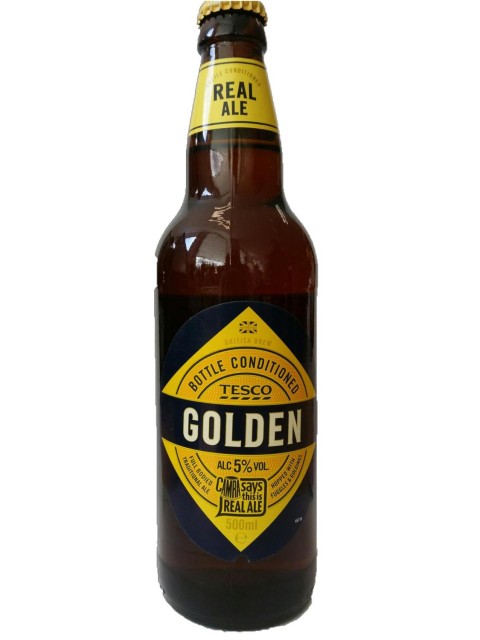 The Tesco Bottled Conditioned Golden Ale, brewed for Tesco by Marston’s, is arriving in stores this week and will retail at £1.99 per 500ml bottle.

To coincide with the launch, a number of stores will have shelf-edge stripping in the beer aisle, which incorporates the “Camra says this is real ale” logo.

Citing the move to tap into the craft beer market with an own-label product, Danielle Jack, product development manager for beers & spirits said, “With the current popularity of craft beer and number of experimental beers on the market, now is the perfect time to be launching the Tesco Bottle Conditioned Golden Ale.”

Chiara Nesbitt, Buying Manager for Beer at Tesco, said, “Tesco has been in discussion with Camra for some time, and so we are delighted to be the first supermarket to launch an own-label ale as part of Camra’s “Real Ale in a bottle” initiative.

“We have selected the Golden Ale as the pioneer for of our own-label bottled conditioned products as it is one of the most popular styles with customers. The bottles hit the shelves next week, and I look forward to hearing some feedback”, she said.

Tom Stainer, Head of Communications at Camra, added, “The Campaign for Real Ale believes in choice for beer drinkers and it is fantastic that Tesco is ensuring shoppers have an additional Real Ale in a Bottle available to them.

“Bottle conditioned beer is the closest drinkers can get to real cask ale from a pub. It’s a fantastic natural, living product and we’re delighted Tesco has chosen to help educate customers further about the delights drinkers can discover from Real Ale in a Bottle,” he said.