Deaths related to alcohol abuse in the UK are at their lowest level in 15 years, new figures from the Office of National Statistics (ONS) show. 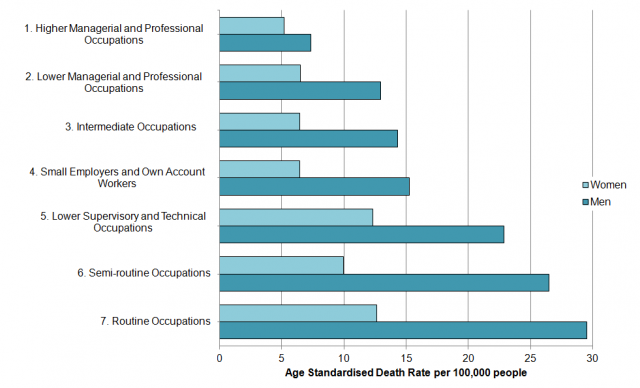 However the research revealed “substantial socio-economic and gender inequality” in alcohol-related deaths among working age adults in “routine occupations”, for example bar staff, cleaners and labourers, compared to those in higher paid managerial professionals.  Alcohol-related deaths were four times higher for men within this group than those in more advantaged socio-economic classes with 29.5 deaths recorded per 100,000 men and 12.6 deaths per 100,000 women.

Across the board, men were more likely to die from an alcohol-related cause than women.

Elaine Hindal, chief executive of the Drinkaware charity, said: “It’s encouraging to see that alcohol related deaths are at their lowest since 2000.  However it’s concerning to see the continued trend of alcohol related deaths disproportionately affecting men and those who work in more manual occupations. This is particularly worrying because ONS data shows that despite those in higher managerial and professional jobs drinking more, those they employ are more likely to die from alcohol related cause. This may be because those workers are more likely to have poorer overall health and are less likely to seek medical advice at the first sign of symptoms.”