A proposal to ban beer sales in small street bars in Vietnam has been dropped though other alcohol laws will be enforced. 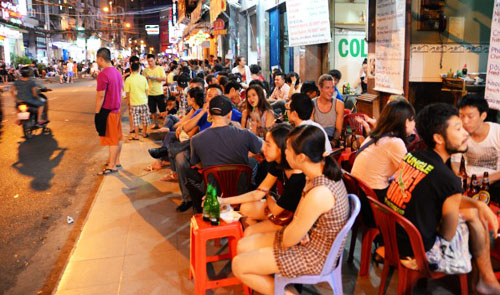 The idea to ban what are called “sidewalk bars” was raised last month and immediately drew flak from beer companies, bar owners and drinkers.

A proposal to ban beer sales to people who are clearly drunk or pregnant was also shelved.

Sidewalk bars are a common sight in Vietnam and are usually intermingled with food stalls and are often merely outside seating for actual bars.

They are enormously popular in Vietnam with both locals and backpackers, highly valued for offering cold, cheap beer especially during the sweltering summer months.

Last year the Vietnamese drank more than 2 billion litres of beer making it the third largest beer drinking country in Asia, behind only China and Japan. It is also one of the biggest beer producers in the region and has already produced around 2bn litres so far this year, a 6% increase on this time last year.

Despite dropping the proposed ban, the government still has plans to push through a new stamping system and banning beer sales to people under 18.

If and when this goes through, beer companies will have to stamp their products to help fight counterfeits, warn drinkers of alcohol abuse and prevent tax evasion.