The famed English diarist mentioned drinking “Ho Bryan” in 1663 and the estate is mentioned in the cellar book of Charles II in 1660 but the new shows that the estate was in existence over a century before, with two documents from the early 16th century noting orders of wine from a Pessac estate called “Aubrion”.

The documents were uncovered in the Gironde Departmental archives by art historian Laurent Chavier as part of the “Historical Challenge” laid down by the estate’s owner, Prince Robert of Luxembourg, in May of last year.

The challenge was for a researcher to uncover a reference to the estate that pre-dated the 1660 mention.

The oldest of the two new mentions dates to 21 January 1521 and is written in French (rather than Gascon) and concerns the sale of a perpetual annuity in wine between Jean de Monque, lord of the locality of Monque and a merchant of Bordeaux, Guilhem de Mailhois.

de Monque writes that he will repay the loan of 400 Bordeaux francs (around €50,000 today) with an annual delivery of “four pipes of wine” (eight barriques or 1,800 litres) from “the place known as Aubrion” and that if there is not enough of that wine then he must provide the shortfall with wine of a similar quality. 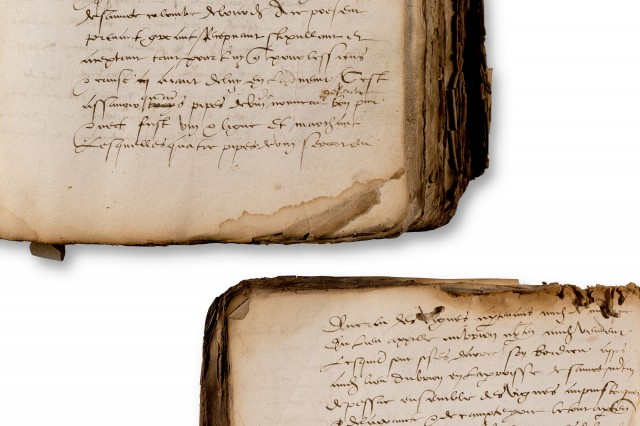 The second reference dates from 1 September 1526 and concerns the sale of “two barrels of clairet or red wine from the vineyard of Haulbrion in Graves”, which is being sold to Pierre Gassies and Pierre Mulle (possibly merchants) by a woman, Esclarmonde de Lagarde.

As the contact is made before the harvest, allowance is made for its colour and concentration hence the reference to red or “clairet” (a dark pink colour).