A US firm has collated statistics and figures from around the world pitting beer against wine. 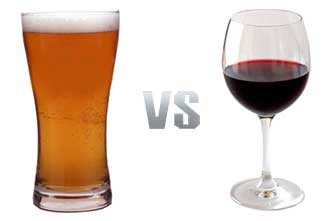 Comaprecamp.com has created an infographic based on worldwide wine and beer figures ostensibly to determine once and for all which one is better.

But rather than fighting can’t we all just get along?

Why can’t we enjoy wine and beer, not necessarily at the same time, but both as viable, acceptable and enjoyable options?

The figures provide numerous interesting facts that could come in handy at your next pub quiz.

For example, the Chinese are the biggest beer drinkers in the world and France have just lost their wine consumption title to the USA but the Vatican drinks more wine per person than anywhere.

And if you’re trying to look after yourself better then red wine can help prevent sunburn but beer is less calorific than wine, which doesn’t explain beer bellies.

Scroll down to find out the most popular beer brands, more health benefits of both and much more.