Liv-ex index: Being the best of the rest

Now recognised with their own Liv-ex index, the Rest of the World offerings are offering a healthy return for buyers who are prepared to broaden their horizons. 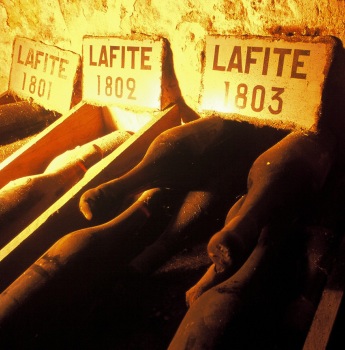 In 2010 and 2011, trade for ‘other’ regions – that is, those beyond Bordeaux, Burgundy, Champagne, Italy and the Rhône – accounted for less than half a percent of all trade on Liv-ex. There was such little demand on the secondary market that the wines did not feature in, nor were they represented by, any index.

Fast-forward three years and the annual trade share for those regions is 2.4% – roughly the same as Burgundy (which now takes over 6%) in 2011. The Liv-ex Fine Wine 1000 Index, launched in January this year, includes a sub-index dedicated to tracking the top wines from several of those “other” regions: Australia, Portugal, Spain and the US. And this index – the Rest of the World 50 (ROW 50) – illustrates just how strongly these wines have performed in relation to the rest of the market.

As shown in Chart 1, the ROW 50 has been climbing steadily for some time. While the Bordeaux 500 and Bordeaux Legends 50 have dropped by over 20% in the last three years, the ROW 50 has risen by 17%. Year to date, it is the only index showing positive movement, with a 2% rise since the start of 2014. 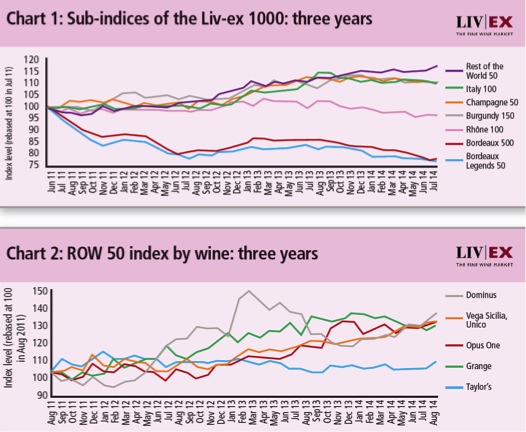 So why have the wines within this index defied prevailing market trends above all others? One reason may be a spate of good vintages that have drawn attention to back vintages. In March 2013 Penfolds Grange 2008 was scored 100 points by Lisa Perotti-Brown MW of The Wine Advocate; in August it scored 100 in the Wine Spectator.

The wines in the ROW 50 are the equivalent “first growths” of their respective regions; they are globally recognised. For some, popularity among buyers has been connected to the brand, meaning that the wines are a similar price irrespective of age or score. Most Opus One vintages are around the £2,200 mark, and the four most recent physical vintages of Vega Sicilia vary by less than 10% (on the plus side, the 97 point 2004 can be bought for just £100 more than the 94 point 2003). They are all significantly cheaper than any Bordeaux first growth.

In 2013, buyers looked beyond Bordeaux to Burgundy, Italy and Champagne. Now they are going further. The value in the fine wine market is certainly out there, and it seems that those broadening their horizons have been rewarded.