Within a notoriously fragmented wine industry, a number of brands have succeeded in building a presence that makes them household names. 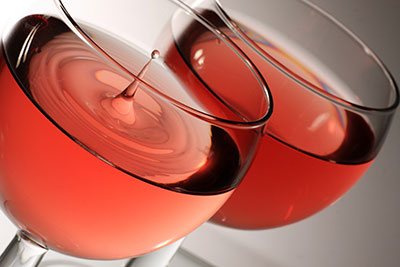 This year’s list of the 10 biggest wine brands by global volume sales shows little movement within the rankings, although with nearly all the featured labels in growth, it is clear that any newcomers hoping to break into this powerful group have their work cut out.

One notable omission from this collection of brands due to an absence of reliable sales data, is a number of big hitters from China such as Great Wall, Dynasty or Changyu. Although almost all their production is sold domestically, making them little known outside the Far East, you can be sure that major global brand owners looking to tap into the growing base of Chinese consumers are watching them carefully.

One to watch in particular is the state-owned Great Wall, the country’s largest with annual sales estimated at over 15 million bottles. Not content with dominating the domestic production scene, Cofco indicated last year that it had plans to expand its vineyard holdings into other countries too.

Another Chinese casting its gaze further afield is Changyu, which last year named its new €70m facility after Austrian producer Lenz Moser, who consults for a brand that is now available around the world, including UK merchant Berry Bros & Rudd.

That said, although the impact of government austerity measures has been more keenly felt in the luxury spirits sector, there are signs that China’s rapidly expanding domestic wine scene is currently experiencing a marked slowdown.

Until China rallies again, as it surely will, it is no coincidence that the world’s other great, but still relatively untapped source of wine consumers continues to provide a significant number of brands in this list.

The US may have a population of over 300 million, but only one third of Americans over the legal age of 21 currently drink wine, according to Stephanie Gallo, vice-president of marketing for her family business.

Nevertheless, slowly but surely, that figure is increasing as wine steadily builds itself a place in popular culture. According to the Californian Wine Institute, in 2012, per capita wine consumption in the US was 2.73 gallons (12.4 litres), up from 2.68 gallons the year before. (These figures include those not of legal drinking age).

That’s an attractive prospect for any wine brand whose business holds a solid base in the US. As even Starbucks gets in on the wine retail act, Gallo puts it, “There is nowhere to go but up.”

Read on to discover the full list and analysis of the world’s top 10 wine brands, based on data sourced either directly from the brands themselves or industry estimates. 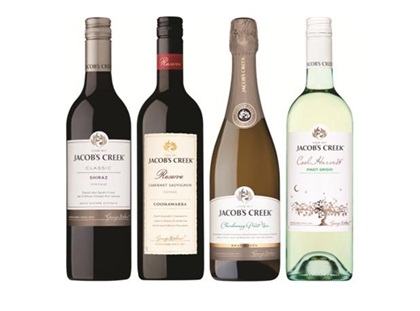 only), WAH (Japan only), Lamoon (Thailand only)

2013 heralded a makeover for Jacob’s Creek as owner Pernod Ricard unveiled a new brand identity for the Australian wine. A vine leaf and creek motif represents the first change to its logo since the brand was created in 1976.

In addition to marketing activity that made Jacob’s Creek the official wine supplier of this year’s Australian Open and an ongoing partnership with actress Naomi Watts for its Cool Harvest range, 2014 sees the introduction of a consumer blending experience. Launched in New Zealand, Blend by Jacob’s Creek pop-up bars will be rolled out worldwide sees winemakers guide guests to mix an array of base wines to match their taste.

Founded back in 1875, Beringer claims the accolade of being Napa Valley’s oldest continuously operating winery.

Now in the hands of Treasury Wine Estates, the brand became the subject of some uncertain rumours at the beginning of this year as new CEO Michael Clarke outlined his plan to revive group profits by exploring cost cutting options.

“We do have too many brands, we need to prioritise our brands and make sure the top end brands get the lion’s share of spend,” he outlined, fuelling speculation that, given Treasury’s particular problems in the US market, California-based Beringer could be a prime target.

For the moment, however, chief winemaker Laurie Hook and her team continue to produce a broad range of wines across the Napa stylistic and price spectrum, with additional vineyards in Knights Valley. 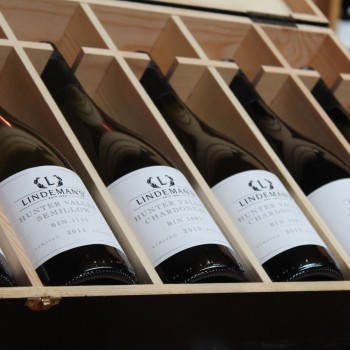 Part of the Treasury Wine Estates portfolio, Australian brand Lindeman’s set out an ambitious stall at the end of last year as it announced a bid to become the “biggest Australian wine brand in the world”.

The 170-year old label aims to leap-frog its competitors with the launch of a new global digital platform dubbed “It’s the sunshine that makes it.” Having ring-fenced £1m for the UK along, the brand is working to spread a core message of “great moments with friends and family”, alongside a bid to highlight its Hunter Valley roots. Explaining this move, chief winemaker Wayne Falkenberg told the drinks business: “At bin level we’re still a major player in quality but regionally we’ve lost a little ground so we’re bringing back regional wines.”

In order to showcase the Hunter’s character, Lindeman’s is focusing on the region’s signature Semillon and Shiraz, with Falkenberg outlining a plan to lay down some wine as reserve stock for “five to seven years”. 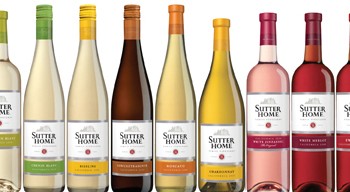 Sutter Home has come a long way since Swiss-German immigrant John Thormann established his small winery in Napa Valley during the late 19th century. Even so, the brand’s long-term owner Trinchero Family Estates prides itself on staying true to Thormann’s motto: “A great product for a fair price.”

2013 saw Sutter Home receive a makeover with a new label designed to “reflect the evolution of the brand and its consumers.” Strongly focused on the US market, Sutter Home continues to build on established initiatives such as its “Build a Better Burger” contest and ongoing “Hope for Home” campaign to support breast cancer research. 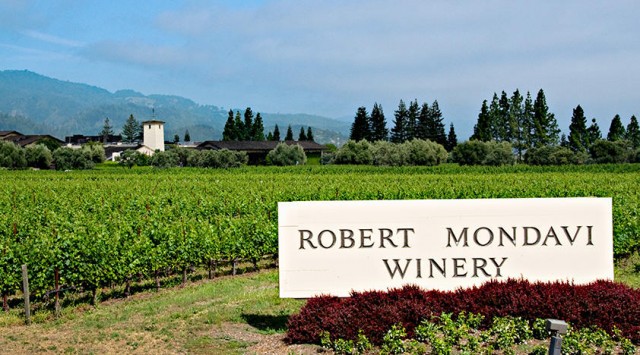 When founder Robert Mondavi established his eponymous winery in 1966, he set in motion a business that would catapult California’s wine industry into the modern era. From winemaking techniques such as stainless steel tanks, cold fermentation and French oak barrels to styles such as Fumé Blanc, Mondavi’s vision shaped the industry.

Now owned by US drinks giant Constellation Brands, last year saw Robert Mondavi Winery mark what would have been the 100th birthday of its founder with a series of celebrations and the renaming of a top block on the estate’s famous To Kalon vineyard “Robert’s Block”. 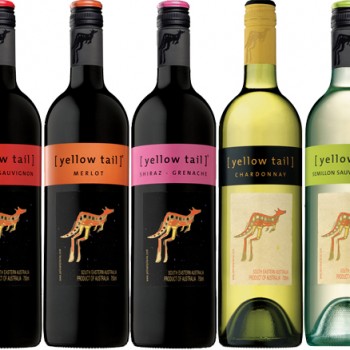 October 2013 marked a milestone for this brand as the one billionth bottle rolled off its production line, fewer than 12 years after Yellow Tail was created in 2001.

Last year also saw the addition of several new lines to the range. These included Yellow Tail Sangria, a variant which blends red wine with citrus flavours for the US and Australian markets, and, unique to the Australian market, Bondi RD: a lightly spritzed Sauvignon Blanc flavoured with either elderflower & mint or ginger & green tea.

In the UK, Yellow Tail claims to the the fastest growing wine brand and the top selling Shiraz. Building on its recent focus on sampling sessions in supermarkets and consumer shows, the brand’s aim in 2014 is to continue raising awareness through its “Are you a bit Yellow Tail?” campaign.

It’s a busy – and important – time for the Hardys brand right now. Following its 2012 relaunch and a £10m investment injection from Champ Private Equity, owner of parent company Accolade Wines, the brand is working hard to shore up its more upmarket positioning through a raft of marketing initiatives. In total the brand announced a £1.8m spend in the UK, with a particular emphasis on Chardonnay.

Building on its existing association with Australia cricket, 2013 has seen Hardy’s extend that focus in a three-year sponsorship deal that makes it the official wine of English cricket.

Following the creation of a central London pop up bar this summer, Hardys has now launched its own online shop, The 1853 Club, as a retail showcase for the top end of its portfolio.

Spearheading this activity is Accolade’s new CEO John Ratcliffe, formerly of Oddbins, Seagram and Liberty Wines, who joined the group in February this year, 15 months after the departure of previous CEO Troy Christensen. 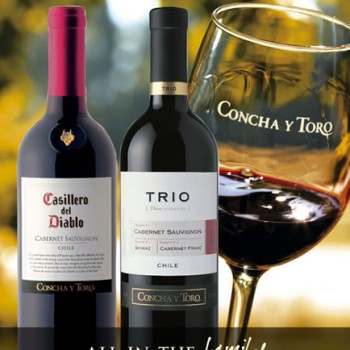 This 130 year old company currently accounts for 34% of Chile’s total wine exports. Leading this charge is flagship Casillero del Diablo, which achieved 12.2% growth last year to reach global sales of 3.8m cases. Boosted by a new campaign and improved sales strategy, the brand racked up solid 27% growth in the UK, its biggest export market, where the business has now set an ambitious target to double sales in the next five years.

Recent years have seen Concha strengthen its networks around the world so that the firm controls distribution for 65.5% of its total volume sales. In March 2014 the company announced a major new deal with Russian Standard, which now looks after its wines in the Russian market. 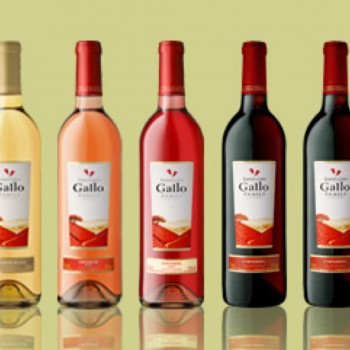 The flagship brand of the world’s largest wine company remains a key fixture on the world’s supermarket shelves. What’s more, it has every reason to maintain this buoyancy if consumer trends in its US heartland are anything to go by. Speaking to the drinks business at the end of last year, vice-president Stephanie Gallo reported on the steadily expanding place for wine in the nation’s culture, helped in part by the emergence of a younger new demographic. “Every morning we wake up there are 11,000 millennials that turn 21, and they don’t view wine as an elitist beverage,” she remarked.

Unsurprisingly, Gallo is determined to tap into this young breed of wine lovers – and not just those in the US. Having already secured a mighty 47% share of the US Moscato market, if you include the company’s Barefoot brand, Gallo recently embarked a UK Moscato campaign, targeted at 25-34-year old women.

The Gallo name may be better known, but sharing the same stable is the still more prolific Barefoot brand.

Founded in 1965, when Davis Bynam created “Barefoot Bynam Burgundy”, the Californian brand really began to pick up speed in 1986, before being absorbed by E&J Gallo in 2005.

Recent years have seen Barefoot capitalise on the hip hop artist-fuelled US trend for Moscato, with the brand leading efforts to spark a similar craze in markets such as the UK. Combine that with the UK’s thirst for sparkling wine and rosé styles and it explains why Barefoot chose to introduce Barefoot Bubbly Moscato here in 2013.

Whichever market you look at, Barefoot maintains a marketing focus that is closely tied to its environmentally friendly ethos that puts great emphasis on benefiting local communities. Activities range from beach cleanup operations to a recent “Respect the Mountains” initiative in the UK’s Peak District and Lake District national parks.

For over 25 years now Barefoot has aligned itself with not-for-profit organisations in the US, supporting the various causes championed by its “Soles of the Year”.

This year also saw Barefoot sponsor an event to mark the start of New York Pride.