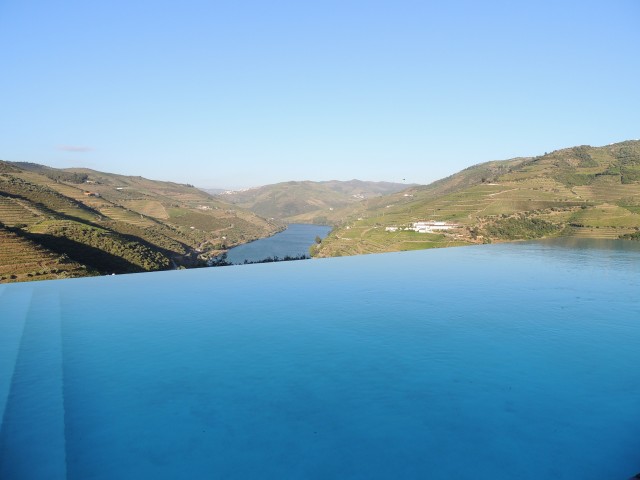 Team db’s Lauren Eads enjoyed a trip to Portugal’s Douro Valley this week taking in the sights of this stunningly beautiful wine region known for its Ports and more recently Douro wines – which are gathering momentum within international markets. Quinta do Crasto is arguably home to one of the most spectacular spots for a swim with its infinity pool positioned high in the mountains. 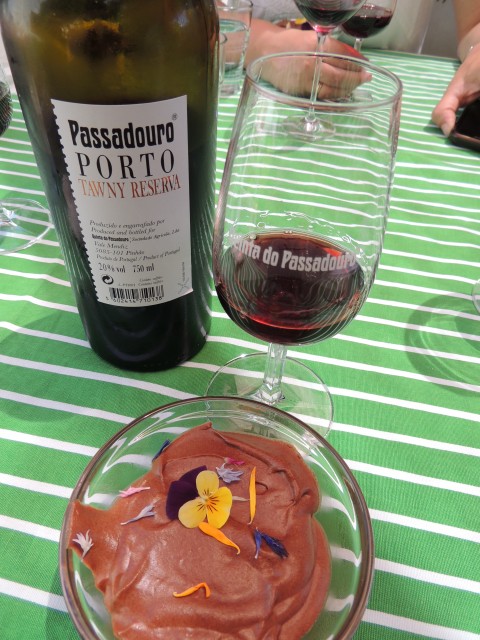 Much Port and merriment was enjoyed throughout the trip during which visits were made to several of the valley’s Quintas, perched high in the mountains, including  Quinta do Crasto, Quinta dos Malvedos, Quevedo in the Douro Superiore and Quinta do Passadouro, where an al fresco lunch was enjoyed alongside a selection of its Ports and wines. A full picture round up of the trip will be published online at the drinks business soon.

It was all stars and stripes at the Playboy Club in London last Friday as they played host to their annual Independence Day bash, attended by db‘s Neal Baker. The Mayfair venue put on an Americana extravaganza which included mini-hamburger canapés and live blues bands playing ’til the early morn’. 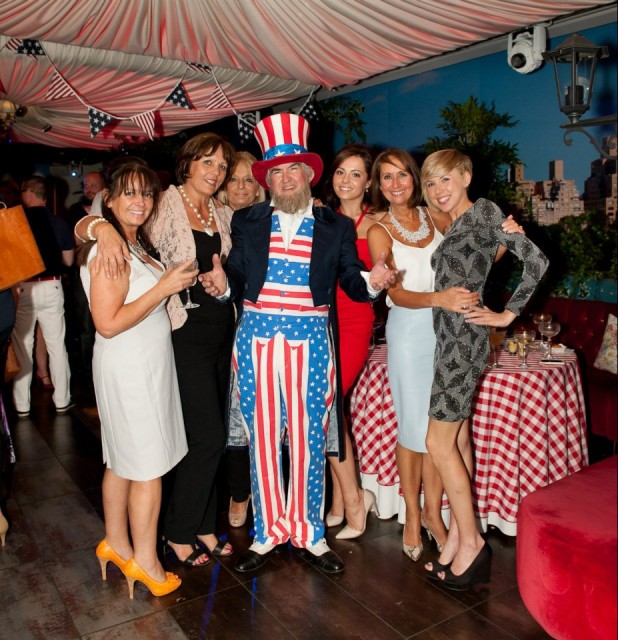 Uncle Sam also dropped by to spread some patriotic spirit at the event organised by M&C Saatchi PR. Cocktails and champagne were gleefully dished out by the ‘bunny-girls’ throughout the night, and there was even accommodation for football fans as the upstairs bar had TVs given over to showing the night’s World Cup matchup. Awesome! 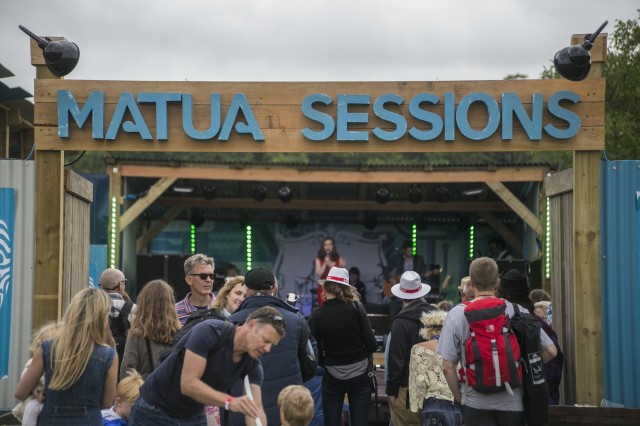 New Zealand winery, Matua, which became the first Kiwi producer of Sauvignon Blanc over forty years ago, launched its first Matua Sessions at the Love Supreme Festival in Sussex last week. The Matua Sessions stage, which gives a platform for emerging artists, was housed in an area designed to represented the “tin shed” beginnings of the brand. 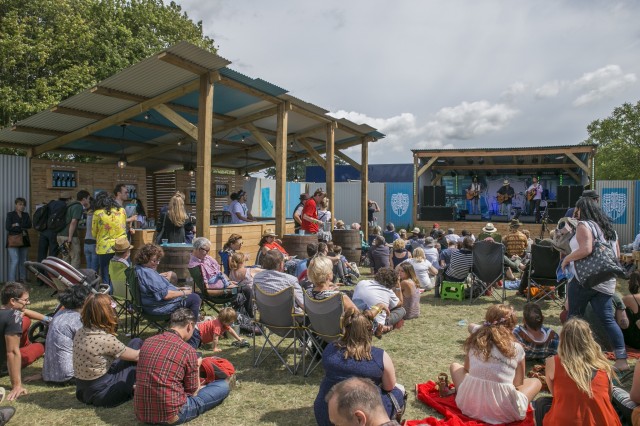 Highlights included Mimika – the London-based sixteen-piece contemporary jazz ensemble – who won the chance to have their festival first and join the line up in the Love Supreme Discovery Competition with Matua. Watch out for The Matua Sessions stage at this year’s Camp Bestival (31 July – 3 August) and Bestival (4 – 7 September) this summer.

The drinks business hosted its inaugural Global Rosé Masters yesterday when dozens of rosé wines put through their paces by our judges for a chance to be awarded a much-coveted medal. The event was held at Hardy’s Brasserie in Marylebone. The results of the judging will be published in an upcoming issue of the drinks business. 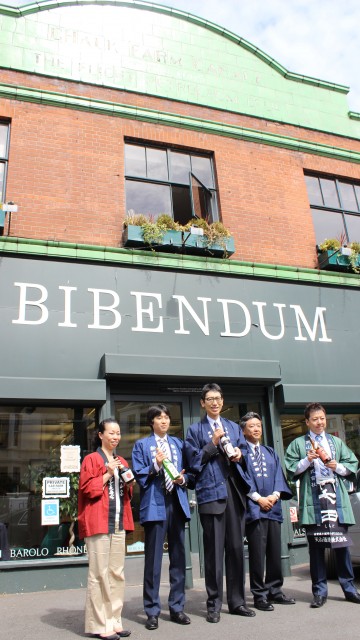 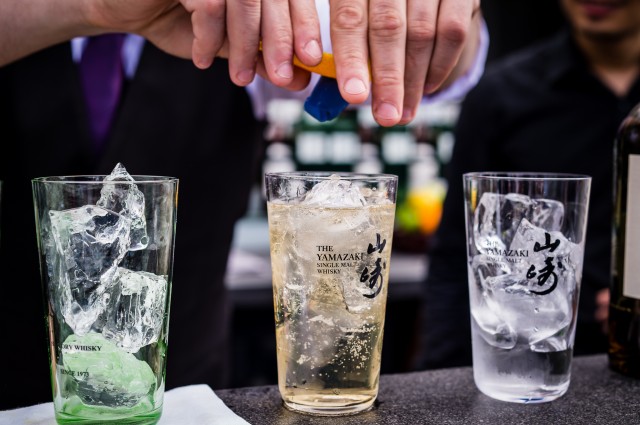 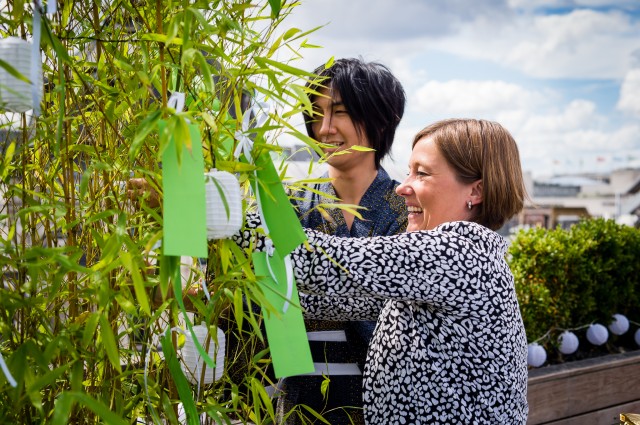 Taking place every 6 July in Japan, Tanabata celebrates the story of two star-crossed lovers, Princess Orihime and Hikoboshi, who were forbidden to be together. Legend has it that the pair would tie wishes to bamboo trees before the seventh day of the seventh month in the hope of meeting again on Tanabata day. Guests at the Suntory party on the Aqua Kyoto roof terrace were encouraged to tie wishes on a bamboo tree in between Whisky Highballs. 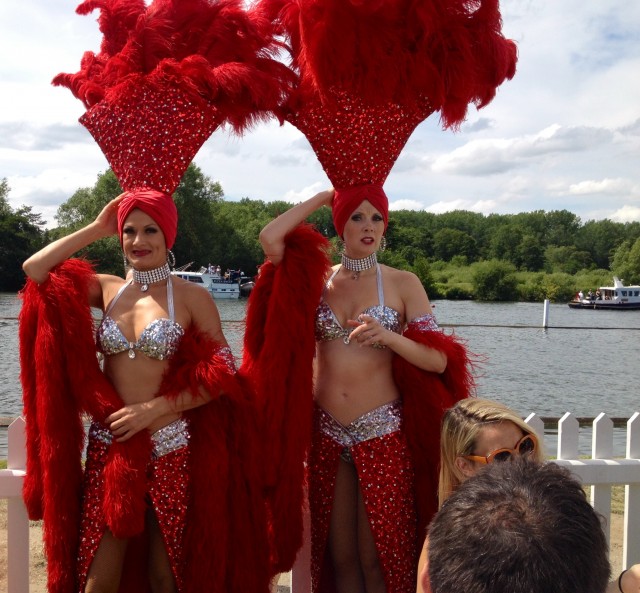 Making the most of the summer season, db’s Lucy Shaw was lucky enough to be invited to Henley Regatta with Visit Las Vegas, where showgirls from La Rêve brightened the riverside with scarlet feather boas and flair bartenders showed off their skills, mixing up daiquiris a plenty. 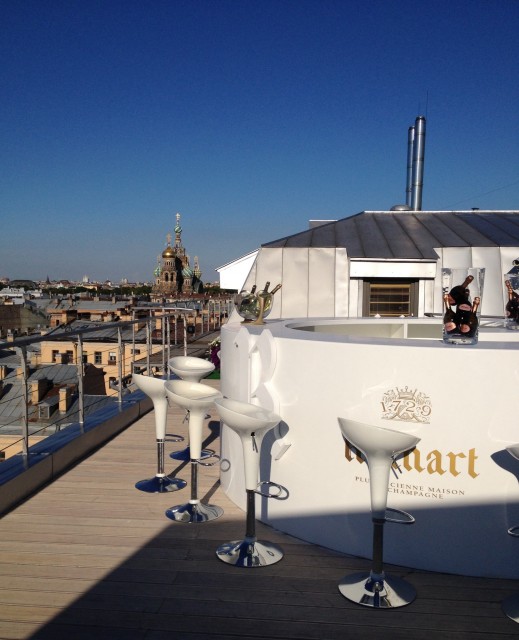 While staying at the Kempinski in St Petersburg this week, db’s Lucy Shaw was delighted to discover a Ruinart bar on the hotel’s roof terrace overlooking the Church of our Saviour of Spilled Blood built on the site where Tsar Alexander II was famously assassinated. 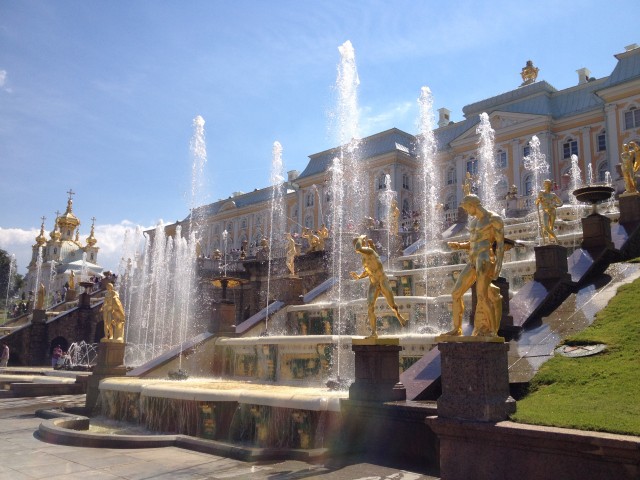 The visit to St Petersburg took in a plethora of palaces, including the palace of Peter the Great – Peterhof – often referred to as the Russian Versailles. One of its former residents, the aforementioned Tsar Alexander II, had Cristal Champagne created for him by Louis Roederer in 1876. Fearing assassination, the Tsar asked for the Champagne to be housed in clear glass bottles so that no poison could be hidden in them, leading to the name “Cristal”.

Former chairman of the Society of Independent Brewers (SIBA), Keith Bott, was this week presented with a Lifetime Achievement Award from the All Party Parliamentary Beer Group (APPBG) following a career in the British brewing business spanning 30 years. Bott started his brewing career as an assistant brewer at a microbrewery in his home town of Stoke-on-Trent, which he then bought, with his brother David, three years later. Bott became a SIBA trustee in 1996 and was elected chairman in 2003 serving two four-year terms as chairman of SIBA and in between them filled the role of president. 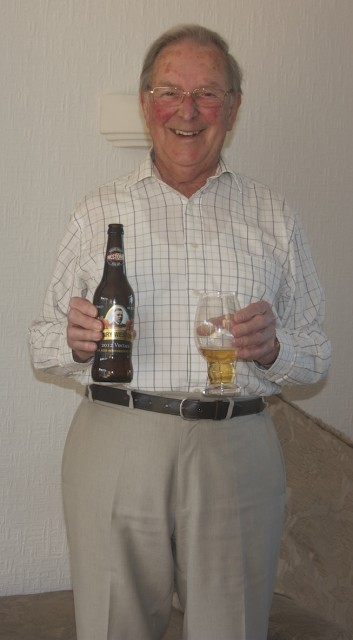 An 88-year-old war veteran this week won the opportunity to have his life story turned into a book as part of a competition run by Henry Westons cider. Peter Hardee, from the West Midlands, spent time serving as an officer in the Royal Lincolnshire Regiment in Jerusalem during World War II, followed by a successful career in the engineering industry. He entered the prize draw by collecting and sending in five Henry Westons bottle tops and will soon have his colourful life documented by professional writer Michelle Higgs. 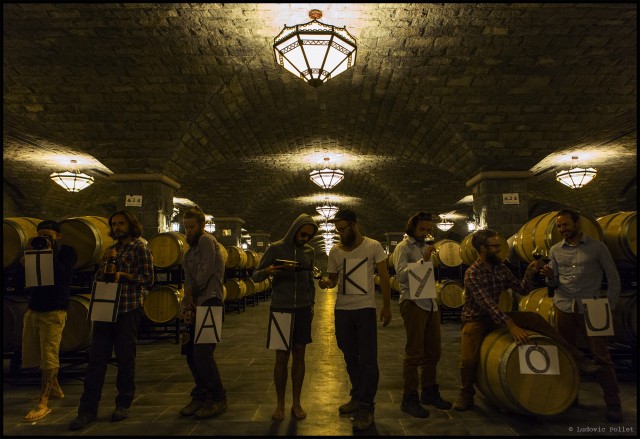 The Wine Explorers this week took time out to say “thank you” to everyone who has supported them so far six months into a three-year-long trip exploring some of the world’s most unusual wine regions including Ethiopia, Namibia and Japan. After six months on the road, the Wine Explorers have taken in 14 countries, visited 68 wineries, tasted over 558 wines and travelled more than 65,000km. This picture was taken at Château Rongzi in China to celebrate the milestone. Follow the Wine Explorers’ adventures on their website, Facebook page and blog. 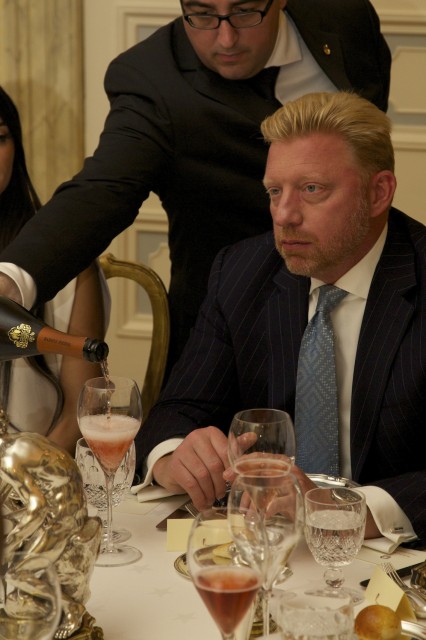 Former tennis ace, Boris Becker, was just one of the high-profile guests to attend a lavish dinner hosted by by the Italian Ambassador, Pasquale Q.Terracciano, and the President of Franciacorta wines, Maurizio Zanella Franciacorta, last week. 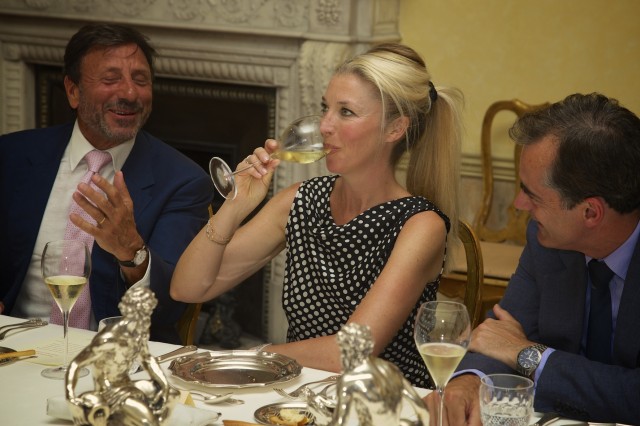 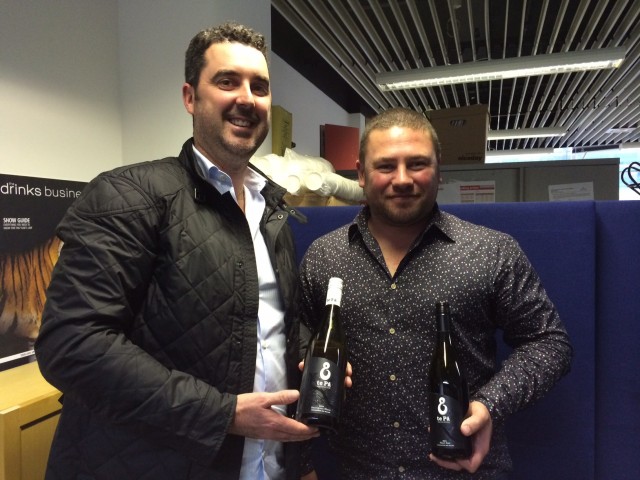 The team behind one of the most ambitious new additions Marlborough’s wine scene, Te Pa, paid a visit to db this week as they introduce their brand to the UK though importer The Wine Fusion. Aided by winemaker Liam McElhinney (left), owner Haysley Macdonald claims an impressive 800-year-old family connection with the Wairau Bar where his ever-expanding 150-acre estate is located. Having only produced its first vintage in 2011, Te Pa is now introducing its Sauvignon Blanc, rosé, Pinot Gris and Pinot Noir to the UK market.